135 children taken away from Mariupol to Moscow – Andriyshchenko 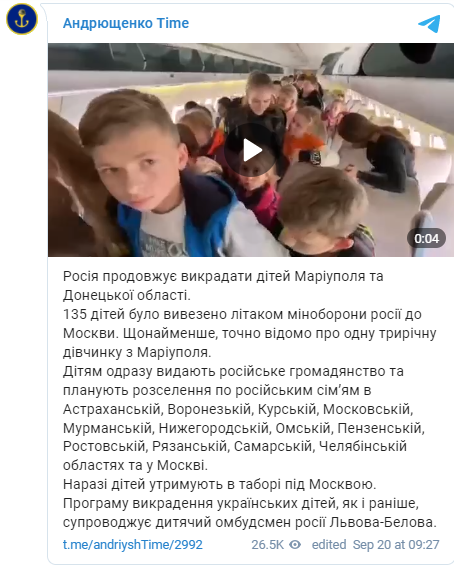 The Russians forced 135 children to leave the temporarily occupied city of Mariupol. They are to be given the Russian citizenship and live in host families, – said Petro Andriyshchenko, Advisor to the Mayor of Mariupol.

According to Andriyshchenko, the children had a flight on board the Russian Defense Ministry aircraft.

The Advisor also added that one of those kids  was a three-year girl from Mariupol.

The children are going to be granted the Russian citizenship and placed in families in Astrahan’, Voronezh, Kursk, Moscow, Murmansk, Nyzhegorodsk, Omsk, Penza, Rostov, Ryazan, Samara, Chelyabinsk regions and in Moscow. Presently, the kids are said to be staying in a camp near Moscow.