38 times and counting. How and when Zelensky violated Ukraine’s Constitution

Volodymyr Zelensky has had a history of disregard for Ukraine's Constitution, and 2-year count by 'Bukvy' has already recorded about 40 violations. 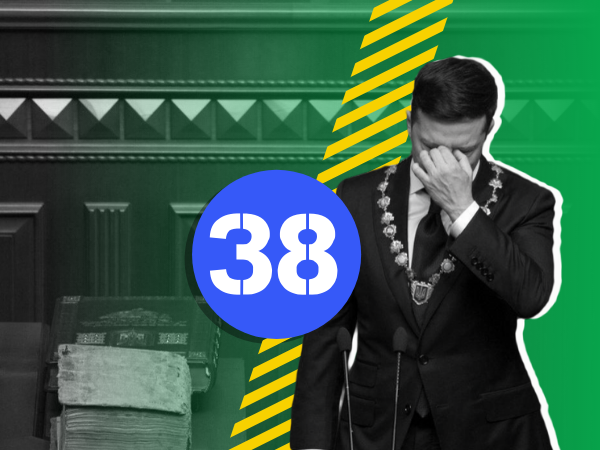 ‘Bukvy’ keeps a track of all the stories that saw Volodymyr Zelensky showing disregard for Ukraine’s Constitution.

Celebration of Constitution Day comes as a timely opportunity to  bring these stories to light.

On numerous occasions, the Ukrainian president chose to switch to Russian, which comes as a clear violation of Ukraine’s Constitution norm laid in  article 10 elaborated and  reinstated by Constitutional Court ruling of December 14, 1999 demanding Ukrainian as an official language be used in the public service positions.

In May, 2019, he reversed the presidential decree No.187 of his predecessor that appointed Volodymyr Gorkovenko to become Ukraine’s National TV and Radiobroadcast Council member.  By doing so, Zelensky violated the article 19 of Ukraine’s Constitution demanding state officials act within bounds of their authority and in the manner envisaged by the Constitution and the laws of Ukraine.

In June 2019, Zelensky did it again by reversing the presidential decrees No.217, 218 that appointed new members to Supreme Council of Justice.

On the very same month, he failed to cite any grounds asking the parliament to remove Yuriy Lutsenko from the Prosecutor General’s position. The move was another breach of law that disregarded art. 19  of Constitution and the law ‘On Prosecutors’ Office’.

He has also failed to comply with Ukraine’s awards regulations. On June 27, he signed a decree honoring Chornobyl firefighters and the  crew of the flight 752 shot down in Iran disregarding the procedures laid in the 2002 presidential decree ‘On Hero of Ukraine awards’ and, again, the article 19 of the constitution.

In 2019, the president violated articles 19, 106 of the constitution  removing several top executives from  Ukraine’s Anti Monopoly Committee (decrees No.484,485,486) on his own will, to which he is not entitled to.

The same constitutional norms were overlooked yet again when Zelensky publicly called for dismissal of regional Customs offices management and made the interim head of State Fiscal Service  Oleksandr Vlasov resign in July 2019.

In September, 2019, Zelensky stripped two ‘European Solidarity’ MPs  – Artur Herasimov and Volodymyr Aryev of their diplomatic status they were earlier granted by earlier presidential decrees  in a blatant violation of articles 19, 58, 106 of Ukraine’s Constitution.

The Ukrainian president often misused his authority when issuing executive orders for state and regional  governments.

In July 2019, during the official meeting at Boryspol city council he scolded and showed the door to the local council secretary calling him a ‘thug’.  The act can be taken as interference in local governance the president claims no authority to, which  violates articles 19, 106, 140 of the constitution .

‘Bukvy’ counted 7 executive orders  by Volodymyr Zelensky that disrespected articles 19, 106, 113 of the constitution. Among those,

No. 558/2019 “On Certain Measures to Improve Individuals’ and Legal Entities’ Access to Electronic Services”;

No. 511/2019 “On Certain Measures for Preserving Forests and Rational Use of Forest Resources”;

No. 837/2019 “On unauthorized measures to carry out reforms and reorganization of the state”;

No. 761/2019 “On Inappropriate Measures to Ensure Favorable Conditions for the Activity of the FOP”;

No. 1/2021 “On the provision of humanitarian aid to Croatia;

No. 261/2021 “On measures to improve the competitiveness of health care institutions and to provide additional guarantees for health care workers”.

He also misused this practice at one of the governmental meeting when demanding  50% reduction of public utilities’ bills for households.

No. 1793 (on establishment of liability for violation of legislation on compliance, manufacture, production, sale, purchase of products, works and services in the military sphere);

No. 6449 (on enhancing liability for crimes committed against minors);

No. 2276 (on amendments to the Code of Ukraine on bankruptcy procedures).

According to article 94 of the constitution, ‘Within fifteen days of the receipt of a law, the President of Ukraine signs it, accepting it for execution, and officially promulgates it, or returns it to the Verkhovna Rada of Ukraine with substantiated and formulated proposals for repeat consideration’.

Revoking  the earlier presidential decree that stripped Mikhael Saakashvili of the Ukrainian citizenship is  another example when Zelensky disregarded articles 19, 106 of the Constitution –he just overlooked the fact it was decrees of personalized, non-regulatory character.

He also disregarded the transitional provisions of Ukraine’s Constitution (chapter 4) by revoking the presidential decree set to regulate pay rates for notaries and taxation for alienation procedures until the appropriate legislation was adopted.

What proved to be the most blatant violation was Volodymyr Zelensky’s semi-official survey called ‘5 questions from the president’ held along with 2019 local elections.  By staging this event, the Ukrainian president disregarded 9 articles of the constitution (art. 17, 19, 69, 75, 92, 93, 102, 106, 116) – he just had no authority for that.