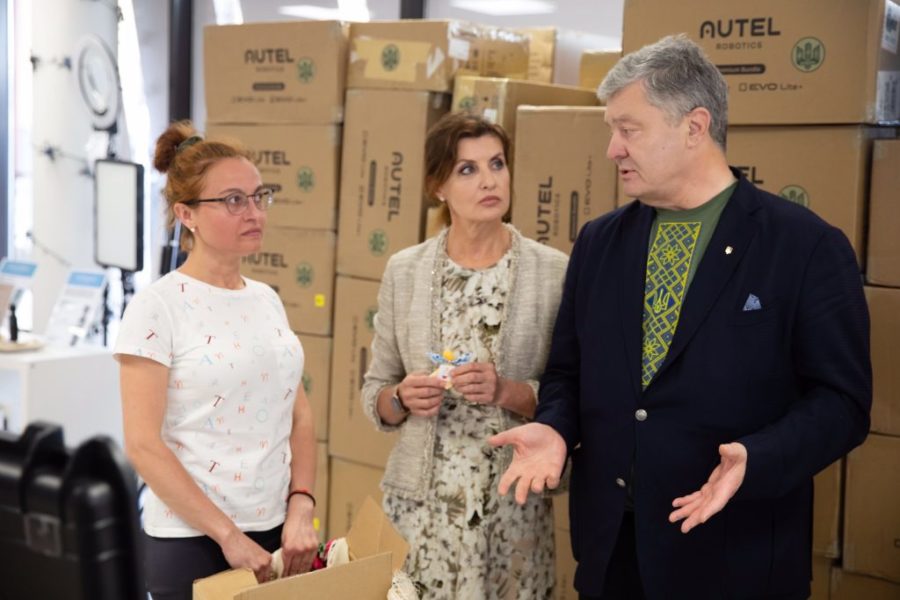 Former Ukrainian president joins forces wit a non-profit Syla Gromad group to pool funds for purchase of 350 drones for the Ukrainian military in Estonia, said European Solidarity party in a statement on Friday.

‘Every unit of the Ukrainian armed forces that is due to get such drone will be able to pinpoint our artillery fire. Artillery shells will destroy this scum that have come to our land,’ said Poroshenko, giving credit to the support Ukraine gets from Estonians.

‘Estonia shows incredible support for Ukraine, we can feel it. You can be walking in the street and people greet you saying ‘Glory to Ukraine!’

Petro Poroshenko’s wife, Maryna, who was also involved in the effort, said the new drones can become true guardian angels for Ukrainian soldiers and civilians.

He blasted the sickening act, adding that Ukraine will ‘crush’ the enemy, while ‘our artillery will drive Russians out of our Ukrainian land’.

The drones will come to the frontlines along with hand-knit charm souvenirs made by Ukrainian women who found refuge in Estonia.

‘They will safeguards our military men and are coming with a handwritten note ‘with love and gratitude’ to keep their souls warm. We all believe in our victory. Ukraine will win,’ said Kateryna Kyrychenko, member of Ukrainian non-profit group residing in Estonia behind the gift-giving idea.