UK Ambassador to Ukraine and BBC joins the chorus of plaudits throwing their weight behind the Indian-made Covishield with misleading claims and inaccurate facts. 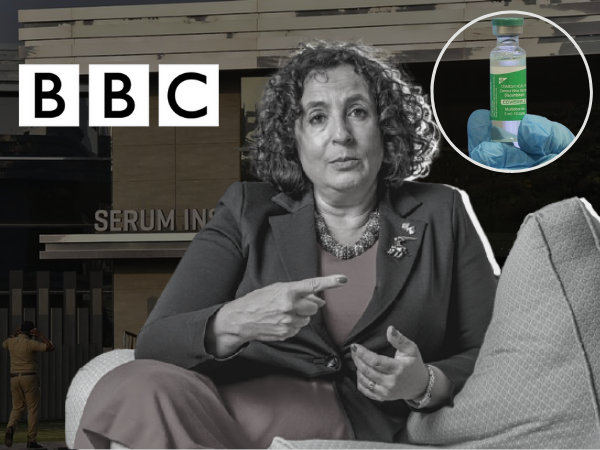 Oxford/AstraZeneca, widely known as AZD1222 Covid-19 vaccine, is a 2-dose viral vector vaccine that, according to its producers, showed a 76% efficiency  in clinical trials and provided recovery for 100% of severe Covid-19 cases.  In February, 2021, AstraZeneca AB got clearance from WHO and now its vaccines are made  on the manufacturing sites in Belgium, the US, Great Britain, South Korea, the Netherlands and China (notably, Indian producers failed to make this list),  The vaccine was also  authorized  by the EU regulator  -European Medicines Agency (EMA).

Notably, Vaxzevria, the Astra/Zeneca vaccine version, manufactured by South Korean Bioscience Co.Ltd  got a separate approval from WHO.

In June 2020, Astra Zeneca AB stuck a license deal with the Serum Institute of India (SII)  that was set to make its version vaccines available for people in developing countries. Thanks to it, Ukraine got supplies of India-made Covishield vaccine.

So are all those AstraZeneca version vaccines really identical?

‘In fact, Covishield is the very same AstraZeneca vaccine, manufactured in the Indian plant. It is listed for emergency use by WHO. It got approved by Great Britain, Canada, the EU, and India. Ukraine carefully looked into the documents submitted by the [vaccine] producer, and on Ferbuary 22, 2021, registered this vaccine for emergency use’.

‘Bukvy’ investigation found  a few little things that put a big question mark over this statement of Ukrainian health officials.

The AstraZeneca version vaccine known as Covishield is manufactured by Serum Institute of India  (SII) under license from AstraZeneka AB.  Dubbed ‘the result of a technology transfer’,  Covishield was cleared by WHO for emergency use along with AstraZeneca and AstraZeneca/SK-Bio.

It must be mentioned  that AstraZeneca AB is not involved in Covishield production.  According to WHO records, the vaccine is produced by Serum Institute of India Pvt. Ltd.on the official authorization from India’s regulator – Central Drugs Standard Control Organization.

WHO listed Covishield for emergency use citing clinical trials of original Astra/Zeneka vaccine, although the EU vaccine producer and the EU regulator are virtually not involved with the India-made vaccine production and certification.

Another possible concern is that, in contrast to Corean SK Bioscience, the Indian vaccine producer  has no   EU-GMP (good manufacturing practice) certification that ensures high quality of the product and meets the registration requirements that assume proper trial results and efficacy data.

‘The vaccine is listed and approved’ claim

As of July 2, 2021, the EMA has cleared Oxford-AstraZeneca’s Vaxzevria which is the European variant of the AstraZeneca while Covishield  has not obtained authorization from the EU regulator to be marketed in Europe.

A flip side of Covishield vaccines

On  July 1, the EU  officially  rolled out a digital Covid certificates’ campaign allowing  entry of 27 European countries  and unrestricted movement within Schengen Area to those travelers who got one of four Covid vaccines authorized by the EU regulator.  Currently, the European Medicines Agency list of certified vaccines includes Pfizer/BioNTech’s Comirnaty, Moderna’s Spikevax, Oxford-AstraZeneca Vaxzevria and Johnson & Johnson’s Janssen meaning European travels are off-limits for people who happened to get  a Covishield shot.

The EU Council recommendations on authorized Covid vaccines are very loose and each EU member country has their own policies in that regard.

Austria opened the door to all vaccinated travelers –  people who failed to get a Covid shot will just have to register digitally and  quarantine for ten days (with a day five ‘test out’). The country has the identical list of approved vaccines.

Interestingly, both the Netherlands and Austria make a clear distinction between European and Indian AstroZeneca version vaccines listing them separately.

Meanwhile, Covishield producers  are still grappling with the authorization issues in Europe.   Adar Poonawalla, CEO of the Serum Institute, said he has taken the issue  up at the “highest levels” to speed up the procedure. Yet, it is still unclear when Covishield can be cleared by EMA.

Why is Indian-made Covishield  endorsed by Great Britain?

Claims that Vazxevria and Covishield are the same vaccine got an endorsement from British diplomats and media.  It is understandable given the role of Great Britain in the story of how Ukraine’s government secured supplies of Covishield.

Ukraine got the vaccination campaign going on February 24,  right after delivery of the first shipment Covishield vaccine. The vaccine contract was negotiated and procured through British Crown Agents that positions itself as a not-for-profit international development company, and until 1997 operated as a public corporation running various financial campaigns in the former British colonies overseen by British government.

Working with the Ukrainian government, Crown Agents stresses its efforts at ‘transparent procurement environment’ and ‘eliminating opportunities for corruption’ though its own procurement policies may look rather controversial. Unsurprisingly, the company’s Wikipedia page is tagged as ‘biased’  and lacking neutrality.

Despite its self-proclaimed ‘not-for-profit’ status, the company commanded fees for its ‘services’ that helped Ukraine procure Covishield vaccines. In a statement on its Ukraine’s vaccine contract, Crown Agents failed to disclose the sum it was paid claiming the fees were covering its operational expanses.

The Ukrainian government also held back the details of Covishield procurement contract, and the deputy health minister even faced allegations over shell life and expiry dates of Indian vaccines.

What made Ukraine’ Health Ministry chose Crown Agents over the state-run ‘Medzakupivli’?

Governmental officials cited ‘experience’, ‘worldwide networking connections’, and  the UK ‘residency status’  among the reasons behind their decision to award the Covishield procurement contract to the British agency.

The move was welcomed by the UK Ambassador to Ukraine Melinda Simmons. On Twitter, she gave the plaudits to AstraZeneca manufacturer insisting Covishield and AstraZeneca AZD 1222 are ‘one and the same’ – disputable claims that obviously contributed to public misconception over these vaccines. 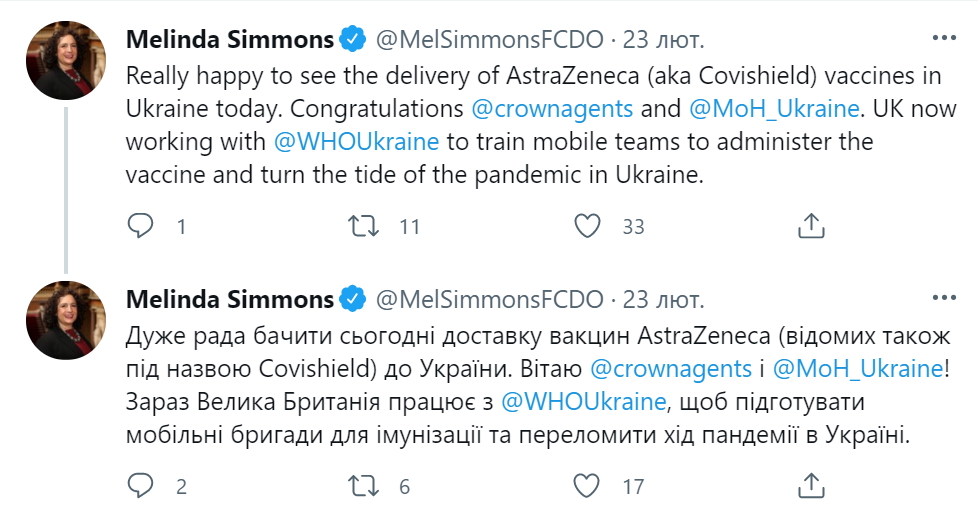 Remarkably, there is no mention of other vaccines in Melinda Simmons’ tweets.

The British Embassy in Ukraine was also contributing to promotion of the Indian vaccine repositing vaccine-related statements by Melinda Simmons.

The British broadcaster BBC also picked up the narrative endorsing the Indian vaccine. The British public broadcaster routinely refers to Covishield as AstraZeneca despite the fact it is  registered under the different name.

Here are a few examples that illustrate this misleading approach.

It is worth mentioning that BBC was also endorsed by the UK Ambassador. In her video on World Press Freedom Day she eagerly promoted the concept of public broadcast companies lauding showcase success of BBC.

All this is part of a bigger picture, where vaccine are made in India, under  the UK license,  and later sold to Ukraine through the British company.  And all this is done in a hardly transparent way with state officials and the procurement agency withholding information about the vaccine trial results and the money spent on it.

Making it all a top secret, Ukraine’s Health ministry top officials hastily put together a promotional campaign endorsed by the UK ambassador  to convince Ukrainians Covishield is  identical to the EU analogue still failing to mention that the Indian vaccine has a  different brand name and lacks proper EU certification.

‘Bukvy’ can’t claim it was part of a big-scale  international corruption scheme, but,  considering the facts, Ukraine’s Covishield procurement scheme now can be seen in a completely different light.