Assault on Petro Poroshenko. What we know so far about the incident, the attacker and the police response

‘European Solidarity’ leader was attacked at March of Patriots in Kyiv on August 24. A 22-years old attacker who doused Petro Poroshenko in toxic antiseptic was soon released with no formal charges filed.

What happened before the attack?

In a statement on Facebook, former SBU senior and ‘European Solidarity’ party member Viktor Kononenko alleged last-minute changes to the march route and handling of the situation by police and state protection agency raise suspicions that the attack was provoked and organized by persons linked to Ukrainian president’s office.

He claimed Petro Poroshenko was shadowed and monitored long before the assault happened but illegal surveillance  was never probed into despite reports in January 2021.

According to Kononenko, state protection agency removed three officers protecting Poroshenko ahead of Independence Day despite the information about a possible assault.

The three protection officers who he knew personally prior to the incident were tasked with security services for foreign diplomats, crippling protection of Poroshenko, stressed the former security senior.

Last-minute changes to the route of the march that blocked Hryshevskiy street are also a question mark, said the former security chief arguing the attacker didn’t fail to take advantage of those.

From what I know, the incident was organized by law-enforcement agencies and ordered by Ukraine’s president office with Zelensky benefiting the most from it.’

The incident happened at Heavenly Hundred memorial site at about 5 p.m.

Viktor Kononenko said there were two attempts made. After the first failed attack at Heavenly Hundred bridge failed, the attacker had another go at the bottleneck of the street leading to the memorial site where the march participant paused to pay tribute to the fallen Maydan activists, said Kononenko. 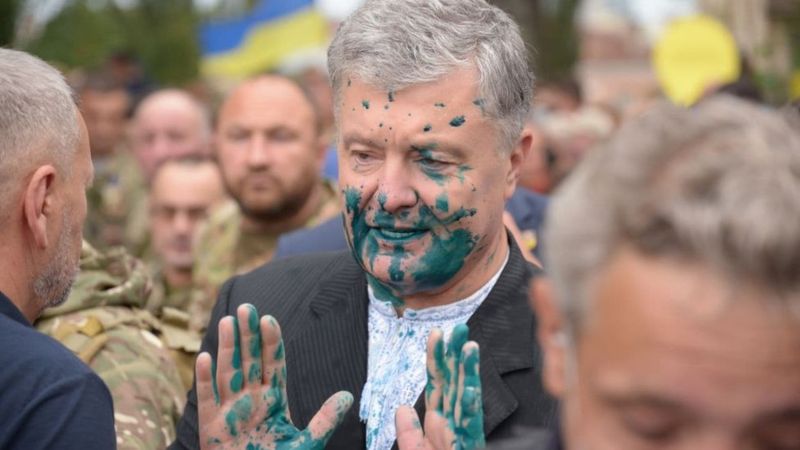 Soon after Petro Poroshenko was assaulted and doused in green dye the footage of it emerged on Telegram channels. In the video the opposition leader is seen escorted to a police car.

In his interview for ‘Prymyi’ TV channel, Kononenko informed that the green-colored  antiseptic  – diluted, though still toxic solution of a triarylmethane dye – left the opposition leader suffering from  chemical burns on his eyes that will require medical treatment. He added it is still unclear how it can impact Poroshenko’s eyesight.

Despite the burns, Petro Poroshenko went ahead with his speech at Spivoche Pole and didn’t call off his late Tuesday meeting with European Commission vice-president Valdis Dombrovskis.

How did police respond to the incident?

Police informed they identified the attacker and filed the arrest report citing charges of misdemeanor under ar.298 of Ukraine’s Criminal Code.

Currently our investigators are questioning the suspect who was swiftly detained and taken to Pechersk police station. The suspect was identified as a 22-years old  Chernyhiv-native,’ said police in a statement Tuesday.

By-standers who helped to detain the man said he was taken to Bankova street. The SBU general Kononenko called into the question police response to the incident.

‘They took him briskly behind the police line in Bankova Street fueling  suspicions  that Zelensky’s officials were behind the incident’.

The lawyer said, ‘They were hiding him in the police [station]. We have just been told, no charges filed, they have done nothing.’

Kononenko argues police chose to report the attack  as misdemeanor despite corroborative evidence it was an act of  violence targeting  a statesman under art.346 of Ukraine’s Criminal Code.

‘European Solidarity’ MP Maksym Savrasov blasted police handling of the case saying he is ‘incensed’ his  report on the violent attack remained unattended.

Petro Poroshenko’s lawyers said they will take action over lenient response of police and defects in the charging document they filed.

Ihor Golovan argues the case is mishandled because the person behind the ‘brutal assault’ on the former Ukrainian president has ‘great powers’ to wield influence over police making it possible to file lower charges and ignore reports from witnesses.

Former SBU senior  Viktor Kononenko who filed a witness statement on the offence said law-enforcement investigators admitted defects in their charging document but claimed it was ‘approved’ by their police seniors meaning they filed lower charges that can help the attacker to get off with a fine while violent offence against a statesman would carry a harsher punishment of up to 7 years in prison.

Who is the attacker?

Soon after the attack, a photo of the attacker was shared on Facebook by  Chernyhiv ‘Natsionaly Korpus’ office head Oleksandr Tarnavski. 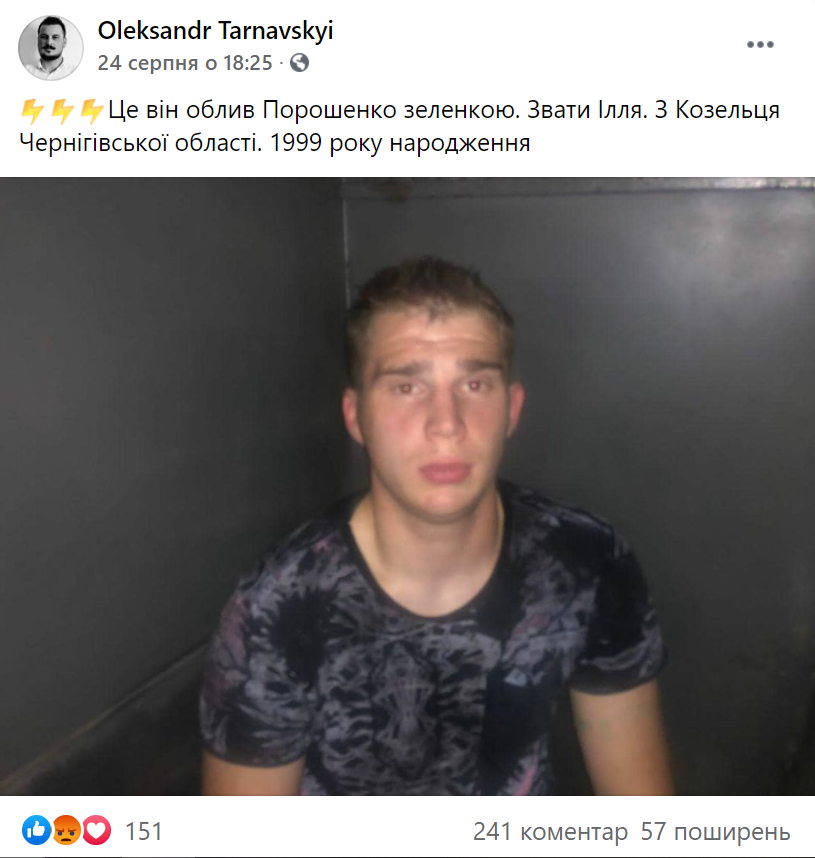 ‘It’s the person who doused Poroshenko in green dye. His name is Illya. Native of Kozelets, Chernyhiv region, 22 – years old.’

Viktor Kononenko says the attacker was identified as Illya Pustovgar known as a member of Kozelets gang group led by a local mobster known as  ‘Bruce’.

‘The man was [earlier] hired for ‘dirty’ assignments. Besides, he is a drug addict meaning he cares only for two things – where to get money and buy drugs. He decides to come to Kyiv for Independence Day celebrations all alone, spots Petro Poroshenko amid thousands of people and attacks him. It is absurd!’ adds Kononenko.

The suspect has a criminal record and was allegedly involved in a forceful appropriation of agricultural business property in Cherkasy region.

The former SBU general calls into question release of Illya Pustovgar. According to Kononenko, the attacker,  in a few hours after his release, was hospitalized in a Kozelets local hospital with symptoms of ‘alcohol intoxication’.

Kozelts hospital confirmed Pustovgar checked in at 6 a.m on Thursday but  was released the same day. Doctors failed to confirm the diagnosis of alcohol intoxication.

Viktor Kononenko says the swift removal of Pustovgar from Kyiv was staged to disrupt the investigation and take time to find someone to blame for the attack organization. The urine tests taken in Kozelets hospital are set to be used for temporary insanity plea while the attacker is now being instructed on how to act in court.

Illya Pustovgar was issued a summons to appear in court on August 27.

‘He was issued a summons for tomorrow to be read an official suspicion. Will it happen or not, it is a gamble,’ stressed Poroshenko’s lawyer.

The US Embassy was among the first who responded to the attack on the Ukrainian opposition leader.

In a statement on its official Twitter account Wednesday, the American diplomats condemned the brutal act stressing ‘physical attacks… have no place in a vibrant democracy.’