The OSCE Representative on Freedom of the Media, Teresa Ribeiro, responded to the attack on ‘Bukvy’ reporter Oleksandr Kuzhelnyi and called for protection of the press in Ukraine.

In her Twitter account, OSCE media freedom Teresa Ribeiro condemned the attack on Kuzhelnyi and stressed the safety of journalists as a democracy key point.

The OSCE senior also demanded from Ukraine’s authorities to protect the press. 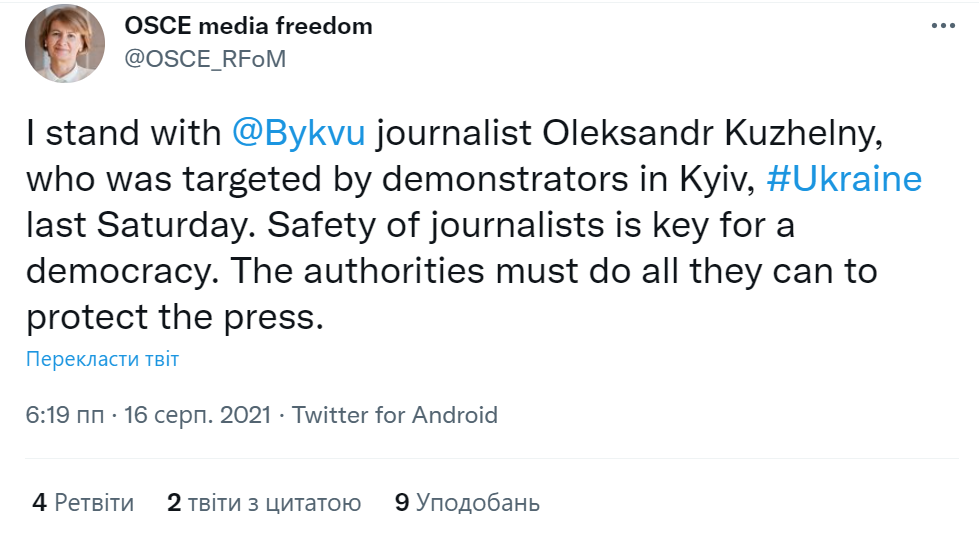 A rally against attacks on journalists is scheduled for August 17 in Kyiv near the Internal Ministry building.

Learn more details about the attack on Kuzhelnyi in ‘Bukvy’ article.

In the autumn of 2019, during a sitting of the Verkhovna Rada, ‘Bukvy’ reporter filmed Bohdan Yaremenko, the then chairperson of the Verkhovna Rada’s foreign policy committee. The MP was allegedly texting a prostitute on a dating website. Yaremenko first declared provocation, and then threatened ‘Bukvy’ with a criminal case.

In September 2020, Yevhen Shevchenko, a former ‘Servant of the People’ representative, threatened ‘Bukvy’ reporter due to revealed  photo taken at a parliamentary session.

Viktor Medvedchuk, a leader of ‘Opposition Plaftorm for Life’ party, is also suing ‘Bukvy’ publishers – Kateryna Roshuk and Petro Terentyev. The defimation lawsuit was filed in May 2019 over scenes in a Vasyl Stus biopic.

In particular, ‘Bukvy’ published an investigation in which they analyzed the activities of bots on Facebook, working in the interests of former Prime Minister Volodymyr Groysman.

Following the publication, the Facebook administration exposed a network of bots linked to MP Andriy Derkach and ex-PM Volodymyr Groysman.