The ‘European Solidarity’ party believes that the authorities are fabricating a case against their representative.

On the morning of November 24, law enforcement officers searched Voloshyn’s house, and ‘police documents directly indicate that they are trying to accuse him of the attempted murder of Shefir’.

‘European Solidarity’ stresses that the government is trying to shift the country’s attention from its total incompetence, the catastrophic situation with COVID, ‘Wagnergate’, offshore scandals and energy crisis. 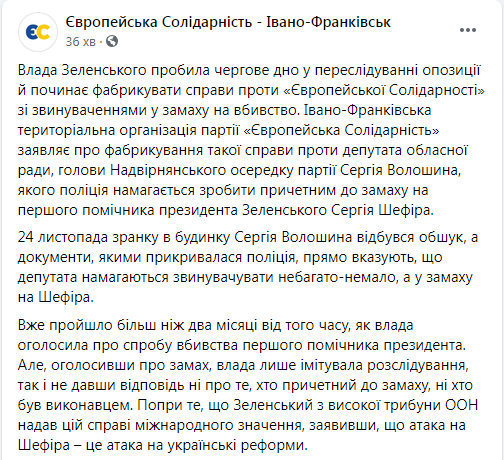 On September 22, the police reported the car of Zelensky’s chief adviser Serhii Shefir was shot at.

Ukraine’s chief prosecutor declared it was an attempted murder.