Canon Europe said in an endorsment statement on Facebook it will have Canon Professional Services point set up at the Crimean festival 'Nature Photo Camp'.

Russian ‘Canon’ office issued the statement on social media last Monday promoting a photography event  set to to be held in the occupied Crimea. 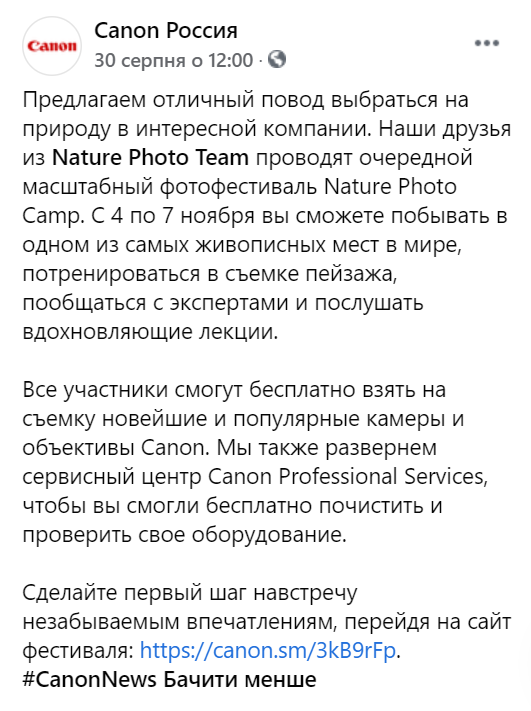 ‘Offering you a great chance to join a cool company on a nature trail. Our ‘Nature Photo Team’ friends are throwing a big scale photographic festival Nature Photo Camp. On October 4-7, you can visit one of the most picturesque places in the world and get a training in landscape photography, talk to experts and enjoy their workshops’, says the social media endorsing the event.

The company informed the festival will have its Canon Professional Services point but  failed to disclose the exact location of the event organized by Moscow-based ‘Klub putesheshestvennikov’ company.

The official Russian Canon website currently doesn’t cite the legal entity behind its  business operations in the Russian Federation.

It is worth noting that entry of Crimea through routes other than mainland Ukraine is a violation of Ukrainian laws, and official Kyiv said last year it will launch a register of international visitors who failed to comply with the policy.

‘Bukvy’ approached Canon Europe for comment on the company’s involvement in the event organized in the annexed Crimea.

Earlier this week, the US-based navigation equipment company Garmin faced backlash over its new maps that labeled Crimea as part of Russia.