Refat Chubarov, the leader of Crimean Tatar mejilis, was sentenced in absentia to 6 years by Russia-controlled ‘Supreme Court of Crimea.

“The Supreme Court of Crimea controlled by the invading country, the Russian Federation, has illegally sentenced the chairman of the Mejlis of the Crimean Tatar people, Refat Chubarov, to six years in prison in a medium-security penitentiary colony,  a fine of RUB 200,000, and 200 hours of corrective labor for alleged organization of  mass riots near the Crimean parliament on February 26, 2014,” wrote Denisova in a statement on Facebook

Ukraine’s ombudsman brushed off the accusations against Chubarov reminding that on that day  the Crimean Tatar leader was among pro-Ukrainian protesters who came to Crimean parliament to support the territorial integrity of Ukraine.

‘Today’s verdict is another evidence of the aggressor-state policies of prosecution and reprisals against Ukrainian citizens. I call on the international community to respond to these facts and step up pressure on the aggressors to make them follow the norms of international law and immediately release all those who are unlawfully imprisoned in the Russian Federation and the occupied territories of Crimea, Donets and Luhansk regions,’ said Lyudmila Denysova. 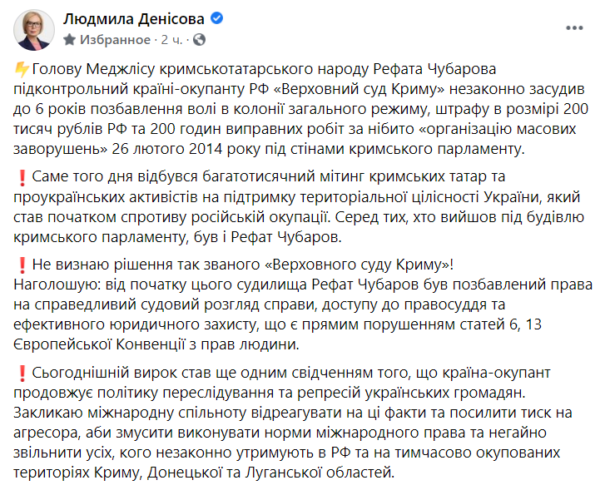