‘Bukvy’ fact-checks  media reports claiming that Vilnus has barred entry of the country to Ukrainian political blogger Anatoliy Shariy who resided in Lithuania in 2012-2019  as a political asylee.

Some resources cited anonymous sources according to which Vilnus stripped the Ukrainian of his political asylee status, while others reported him declared ‘persona non grata’. Anatoliy Shariy, according to reports, was considering an appeal on the decision put in effect on May 10.

Neither of the news stories provided credible sources and documents attesting to the story.

What does Anatoliy Shariy say?

The controversial blogger and political activist insists he knows nothing of the alleged development.

‘Personally I hear it for the first time. But I can hardly believe it. The sources would have informed about it three weeks ago, something is wrong here… Anyway, Lithuania is a powerful geopolitical actor and if they decide on something it is no accident’  he responded on social media. 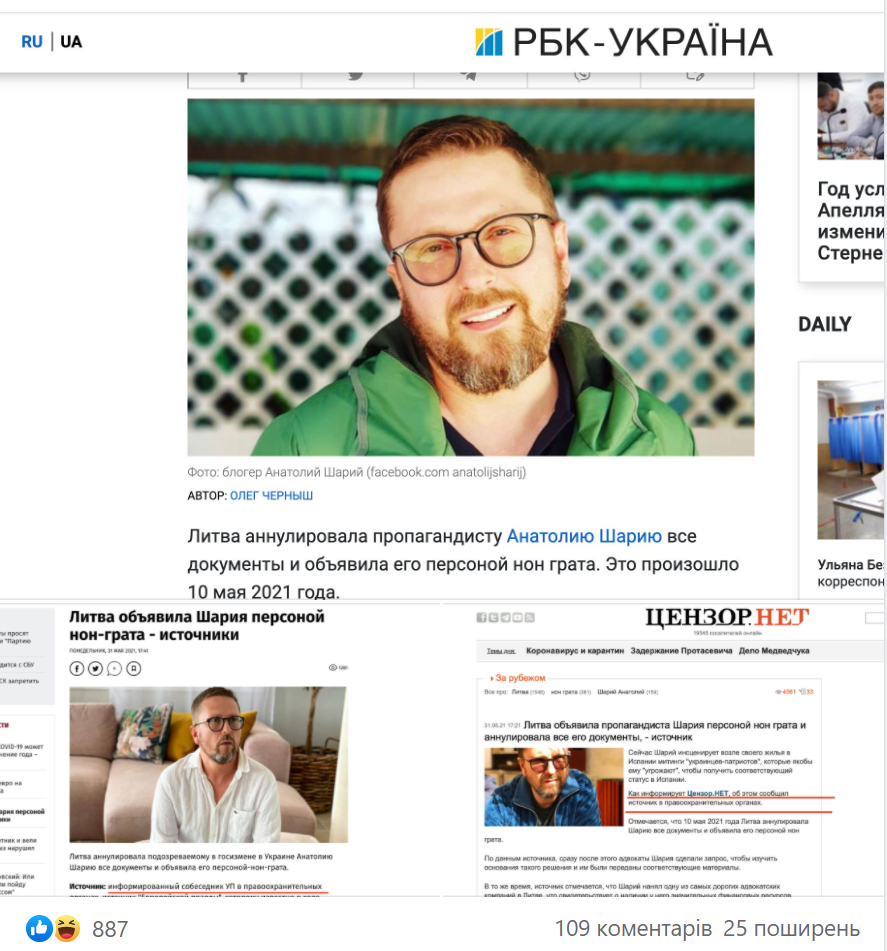 The news of the Lithuania’s decision on Shariy were shared on social media by the Ukrainian ‘European Solidarity’ MP Oleksiy Goncharenko and the Russian lawyer-turned-blogger Mark Feygin with both citing each other allegations. 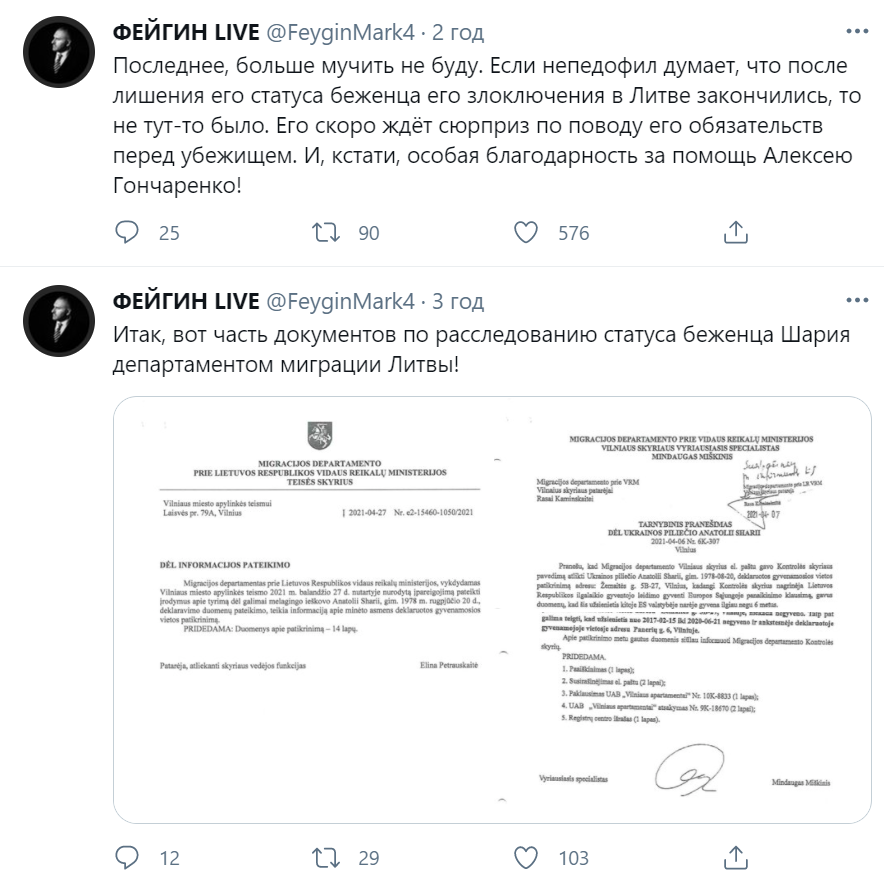 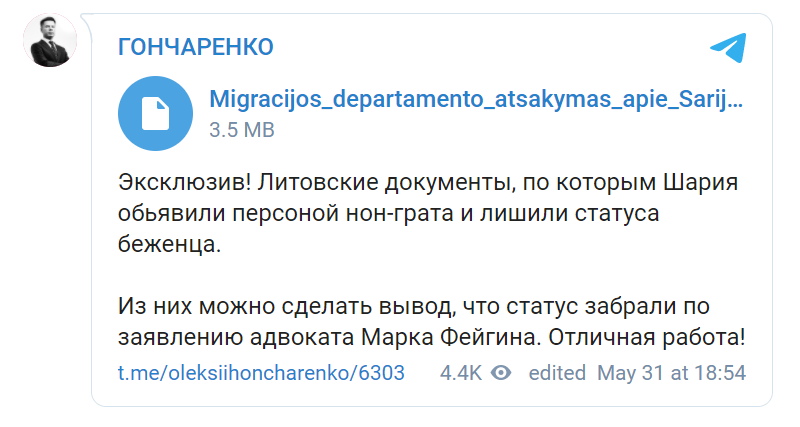 They revealed documents coming from Lithuania’s IMigration Department that allegedly declared Shariy ‘persona non grata’ and, according to Gonchanenko, were stripping the former of his assylee status.

These ‘documents’ were also cited by the journalist Andriy Dzindzya. 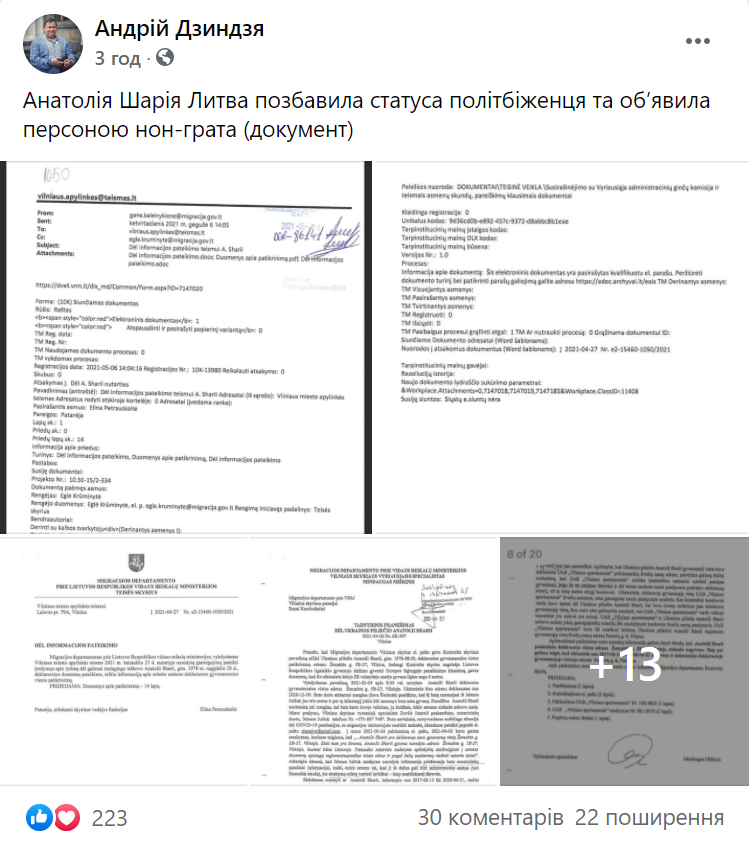 The story was soon widely shared  on social media.

The three documents they refer to come in Lithuanian and have no translation.

The second document comes from Mindaugas Mishkins, Migration Department expert, who was assigned a task to check  Shariy’s residence addresses. In his report, Mishkins says that his department is considering revocation of a Lithuania-issued EU residence permit for Anatoliy Shariy ‘on receiving information that the latter for 6 years  was residing in other EU state’.

The expert visited several places at the addresses earlier listed by Shariy. One of the apartments of Shariy had new lodgers. According to Mishkis report, one of the apartments is let by Yelena Yulchik who claimed that Shariy used other apartment during his stay in Vilnus.

The owners of the second place, a boarding house where Shariy allegedly stayed in February-June 2020, also failed to confirm his stay with them.

The Property Register records list Yelena Yulchik as a landlady  of the alleged Shariy apartment, says the expert report.

‘ Bukvy’ assessment of the revealed documents does not produce enough evidence to  claim that Anatoliy Shariy was declared ‘persona non grata’ by Lithuania.

‘Bukvy’ filed request for information to  the Embassy of Lithuania in Ukraine to clarify the issue.