17:22 A man arrested in Chernihiv over hoax bomb threats had ‘curators in Russia’, – security service statment
12:29 Ukraine strikes a deal with Hungary to boost gas supplies by a third in 2022
11:15 Small business owners stage a protest at Ukraine’s parliament, call for simplified tax recording
10:01 ‘Ready for any challenges’, Zelensky speaks out after urgent meeting of state security council

With the most major parties seeing their support numbers dwindling, 'European Solidarity' remains the only party attracting new voters, up 3 points compared to the June findings.

The survey conducted by KIIS found that only two Ukrainian parties enjoy support  in solid two-digit numbers. ‘European Solidarity’ is now taking the lead in voting intentions as  almost one in five Ukrainians said (19,8%) said they would vote the party if this were election day.

‘Servant of the People’ has slid to second place and its support now stands at 18,3% compared to 20,3%  they boasted back in June.

Despite narrow gap – roughly 1,5 points between the two leaders,  European Solidarity boasts the climbing number of support, up to 2.9 % compared to the June survey figures.

Yuliya Tymoshenko’s ‘Batkivschyna’ support is at  9.1%, which is almost 3 points down  compared to its June numbers.

With pro-Russian sentiment steadily on the wane, Moscow-leaning ‘Opposition Platform for Life’ is also 3 points down to 9%.

The support for other three parties in the top 5 – ‘Syla i Chest’, ‘Radykalna party’, and Groysman’s ‘Ukrainska Strategiya’ –  hovers between 5- 7%. 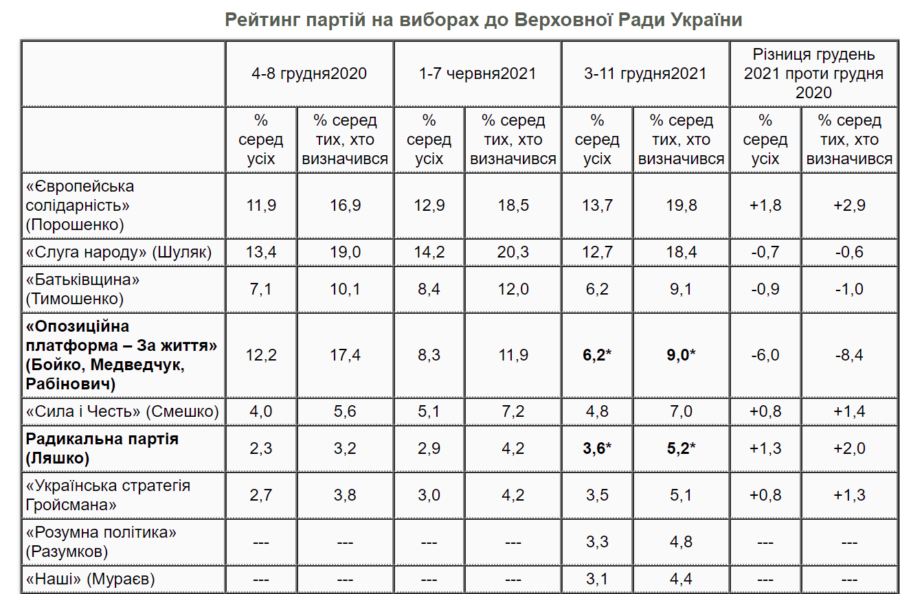