The adviser to the head of the President’s office and president of the Kyiv School of Economics Tymofii Mylovanov has revealed how he lied to the the US border control.

On Facebook, Mylovanov told about his travel to the United States. According to him, he tries to come to the country every month, although as a green card holder he has to be in the United States for most of the year.

‘I have been violating this requirement for the last 7 years, but I try to visit the United States every month. Then the border guards do not have questions’, Mylovanov wrote.

His route ran from Kyiv to Pittsburgh, Pennsylvania, via Frankfurt, Germany and Chicago, Illinois.

In Chicago, Mylovanov, with a black eye after a recent fight with former secretary of the National Security and Defense Council Oleksii Danyliuk, had to be inspected by the US Border Service.

During the inspection, Mylovanov told border guards that teaching at the University of Pittsburgh was his main employment.

‘The facial recognition system identified my face despite the bruise and sent to the customs and border officers. The officers began to ask me about my activities in Ukraine. I said I had been a minister, but now I am a professor in Pittsburgh and pay taxes there. The United States is my home in terms of their laws. Yes, I am the adviser to the President’s office, teach at the Kyiv School of Economics and have several other positions in Ukraine, but all that is secondary to teaching in Pittsburgh. They asked how I had taught the previous year. I said online. My arguments were accepted.’

In comments, the ex-minister was criticized for his statement that his teaching and political activities in Ukraine were less important. Mylovanov answered he had said that not to lose the green card. 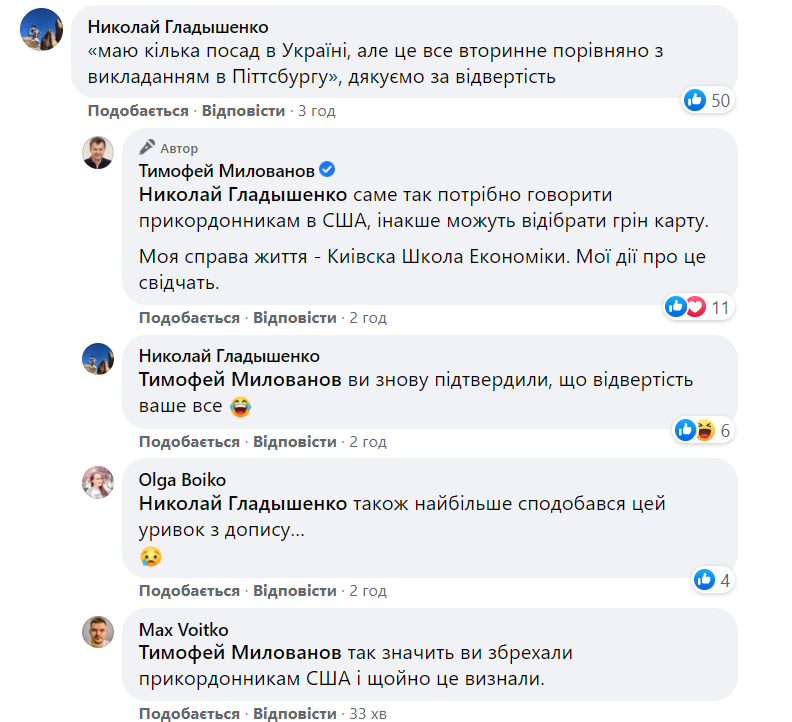 On the University of Pittsburgh website, Mylovanov is listed as an associate professor, working there since 2015.In 2020, he declared 1.16 million hryvnias as the salary of a university employee.

He identified the University of Pittsburgh as his main place of work. However, Mylovanov also referred to the international NGO ‘Kyiv Economic Institute’ and the Ministry of Economic Development, Trade and Agriculture as his main employments.

Mylovanov rarely covers his activities at the University of Pittsburgh on his social media, so there is no confirmation or refutation whether he really continued to work as a professor remotely during 2020.

However, the ex-minister recently announced on Facebook his return to teaching in Pittsburgh.

Besides that, Mylovanov remains the president of the Kyiv School of Economics. In November 2020, Mylovanov was appointed the adviser to Andrii Yermak, the head of the President’s office. Since April, Milovanov has also been an acting director of the National Investment Fund of Ukraine. In addition, in June 2021, Mylovanov was elected the chairperson of the supervisory board of ‘Ukroboronprom’ concern. At the same time, he heads a competition commission to select the head of the Bureau of Economic Security.

‘Bukvy’ news outlet addresses the US Embassy in Ukraine to find out what the consequences may be for Mylovanov because of lying to the US border control.