The National Anti-Corruption Bureau (NABU) informed the chairperson of Kharkiv regional council Artur Tovmasian, elected from the ‘Servant of the People’ party, about the suspicion of receiving a bribe of 1.05 million hryvnias.

According to NABU, the actions of the official are qualified as ‘receipt of illegal benefit in a particularly large amount’.

The investigators are currently considering the issue of taking into custody.

NABU detectives claim that Tovmasian, together with his deputy, demanded and received a bribe of UAH 1.05 million. This sum had to be paid for the position of the head of the regional utility company, which is controlled by Kharkiv regional council.

During the first half of 2021, the officials received this amount in four tranches via an accomplice lawyer. 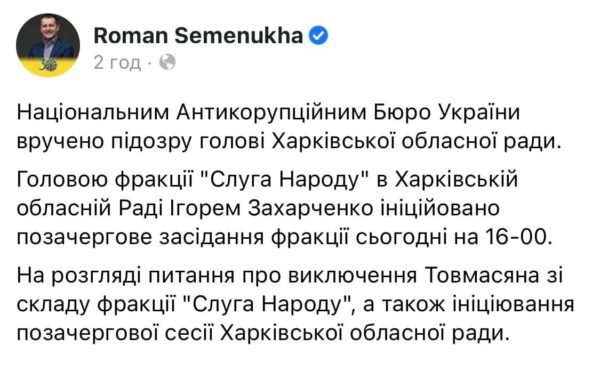