Minsk TCG agrees on Easter ceasefire, but fails to finalize the document

Meeting  on April 28 to discuss re-establishment of ‘thorough and comprehensive’ ceasefire in Donbas,  Heads of TCG delegations presented the idea of ‘Easter’ ceasefire, says the statement of the Ukraine’s TCG delegation.

“The parties have brought positions closer and agreed, in general, to the idea of “Easter” ceasefire. The parties have agreed to continue their work towards finding additional measures to improve the mechanism preventing ceasefire violations,” says the statement. 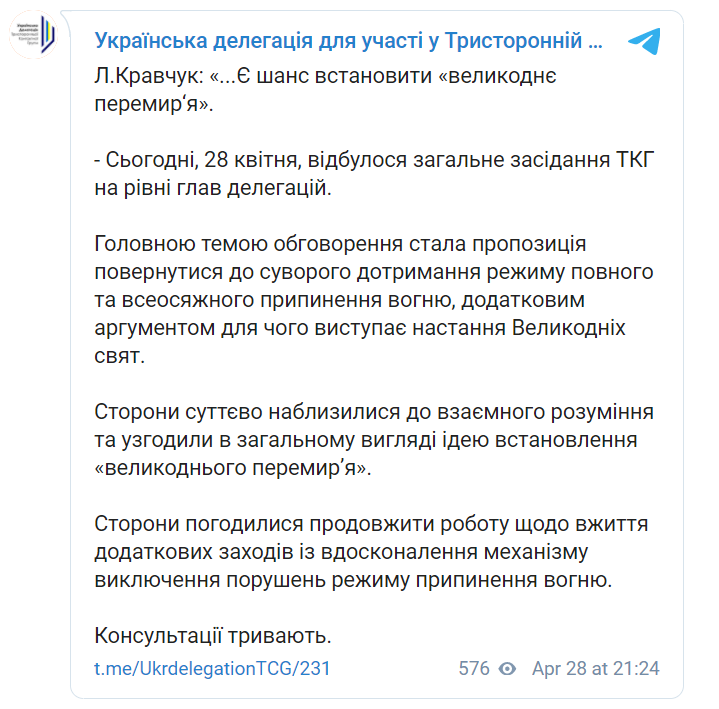 In his comments for  ‘Ukraine24’ TV channel,  Oleksiy Arestovych,  Ukraine’s delegation spokesperson, informed why the meeting failed to ready the document on it.

‘All the sides upheld the position on ‘Easter’ ceasefire. We tried to work it out for 6 hours. And failed. Failed to finalize the joint statement. There are some sensitive moments,” said Arestovych.

According to the spokesperson, the issue will be resolved on 29-30 April.

“ I can assure you that all of us want [to arrange] this ‘Easter’ ceasefire. The idea got approved, the document was almost finalized. We agreed [to find ways] to agree [on it],”  he added.

On April 20, the TCG delegates approved a draft plan reinforcing ‘a mode of silence’ in Donbas that was offered by the Ukrainian side with the final document still pending.