Appearing as a guest on a TV talk show ‘Pravo na Vladu’,   Mykola Kolesnyk, ‘Kryvbas’ volunteer battalion representative, made several controversial statements addressing the early stages of war in Donbas and the role of the former Ukrainian president.

‘Bukvy’ looked into his claims and found several serious inaccuracies and misquotes.

Mykola Kolesnyk stated than in the wake of  Donbas conflict there was no ‘total mobilization and state of emergency’.

It is obvious misinformation. In 2014-2015, Ukraine had 6 mobilization campaigns while pre-planned seventh one was eventually called off due to stabilized situation on the front and sufficient numbers of military forces. At that time, Petro Poroshenko was quoted as saying that those mobilization campaigns added 210 thousand troops to the Ukrainian army with ‘each sixth of newcomers [in the army] being a military volunteer’. 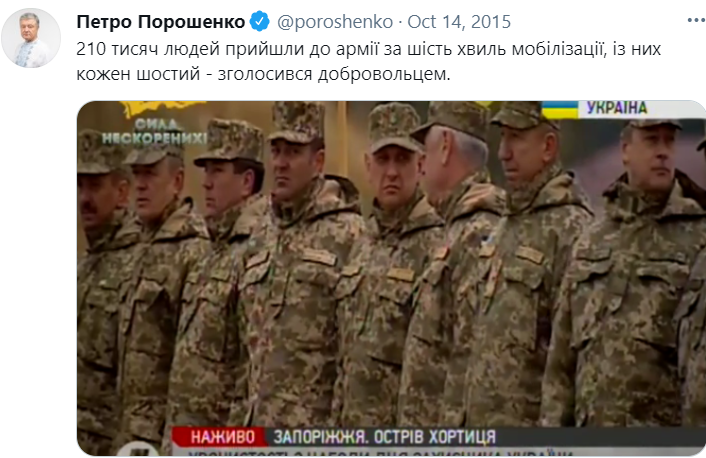 ‘State of emergency’ mentioned by Kolesnyk could not be regarded as an imperative and answer-all option for the situation where Ukraine faced ‘proxy war’ aggression from Russia due to complicated procedures of its introduction assuming that it is put in force by the Ukrainian president, and on approval from the Verkhovna Rada and National Security and Defence Council.

State of emergency was put in place later, on November 26, 2018, for a month term following capture of Ukrainian navy personnel in Kerch Strait.

Mykola Kolesnyk also argued that back then the Ukrainian ‘did nothing’ to debunk the misconceptions of ‘civil conflict’ that, back then, was endorsed by the international community.

Here are four core basic that make such claim misleading.

The Ukrainian government under Poroshenko takes due credit for these actions that helped Kyiv win support of the international community and dispelled   myths of so-called ‘civil conflict’.

In another misleading statement, Kolesnyk argued that former president Petro Poroshenko ‘blamed’  ‘Kryvbas’ battalion in ‘cowardice’ during the events of  Debaltsevlo engagement.

‘Bukvy’ fact-check shows that ‘cowardice’ quote is by former Chief of Army Staff Viktor Muzhenko and is inaccurately attributed to Poroshenko.

Among other things, Mykola Kolesnyk also alleged that  criminal cases against the Russian military in Donbas came  2021 after  TV reports on tortures of Ukrainian military detainees, which is clear misinformation.

Since 2014, Ukraine, according to the SBU records, has launched over 16 thousand probes in treason and terrorism cases with 90 cases against terrorist leaders going on trial.