Mykola Chaus interview: ‘I had to give hope to my family, let them know that I was still alive’ 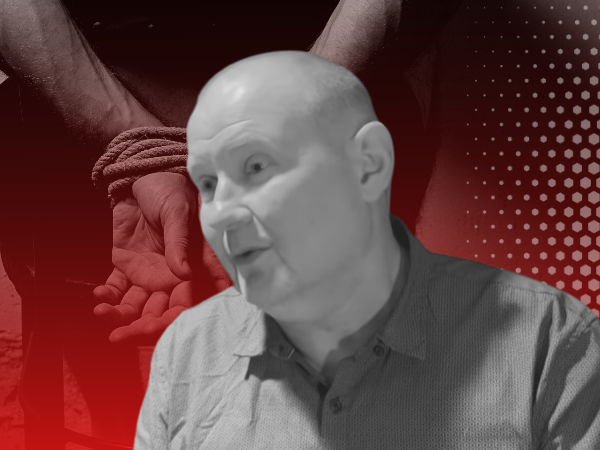 The shocking kidnapping facts revealed by Mykola Chaus in the first part of his interview painted a grim picture of the alleged role of Ukrainian intelligence agencies in the scandal, argued Volodymyr Aryev, who released an extended tell-all conversation with the former Kyiv judge about  his dramatic and truamatizing return to Ukraine.

Mykola Chaus who fled to Moldova facing bribery charges  said he would certainly be able to identify the people involved in his abduction and tortures he was threatened with in captivity.

‘They put me on the passenger seat floor mat and one of them sat on my head.. When I tried to crawl out  they punched me on my back and kidneys. It lasted for 20 minutes’. When the car drove out of the city, they moved me to some green or blue sedan that looked like a Peuageout’.

Chaus argued that he had been taken to the Ukrainian border where his abductors got a phone call, tied his hands with zip ties and blindfolded him.

They walked some 100 meters to the place where a Toyota car was and  one of the abductor on seeing a cut on Chaus arm offered a band aid, said the former judge, noting that the route took them later to some river they crossed on a boat.

Media reports at the time of Chaus kidnapping claimed he was taken out of Moldova in a Toyota RAV4.

The judge said the car drove for some 7 hours and on arrival to some place with draped windown where he had stitched put on his arm cut.

Then he was moved to another site nearby where he spend 23 days with a bag on his head that was removed a few times when his abductors needed to make a video questioning him.

‘I was handcuffed to a bed for two months. And was allowed to get up for a meal. They would take off a bag off my head when they took me to a toilet. They said I was drinking too much [water] and I went down to a half a litre of it a day.’

According to the former judge, he could hear some children voices, some repair work going, and there were kitchen smells.

‘They wanted to know about the hearings on Korban case,  Ivanushchenko case, asked how many times I visited Poroshenko’s office and if the former gave me any instructions’.

Chaus denied  he had had any earlier contacts with Petro Poroshenko.

‘I had never visited [Poroshenko’s] office, never talked to him, nor on phone, nor in person. They demanded I told about the things that never happened’.

The abductors pressed and threatened him, said Chaus, noting his abductors hinted they were offered 800 thousand hryvnas for keeping him in captivity and away from Ukraine.

He also revealed the video in which he was making some ‘confessions’ that emerged on Telegram channels soon after his kidnapping were staged and he was forced to do them.

‘They told me if I didn’t make a video, I would stay there [in captivity]. I thought I needed to give some hope to my children, my wife so that they could live with  hope knowing I was still alive. I was forced to learn statements [for those videos]’

He admitted he had to tell the abductors all he knew about Korban criminal case and all the events that took place before his escape to Chisinau.

The former judge who fled to Moldova in 2016  facing corruption charges said  the abductors would come with a list of questions he would have to answer ticking yes or no boxes.

‘The third time they brought just a paper with no boxes.. Telling me I will be taped on video reading questions and answering yes to them. I had to write that I was coming to Kyiv by plane and got direct instructions from Poroshenko to jail Korban, otherwise I would not get out of there alive’ .

Chaus was offered only scrambled eggs or meat dumplings, and tormenting captivity conditions put a strain on his health.    After 50 days spent in a dark basement, the judge felt the signs of hearing and sight damage that made his abductors bring in a doctor and change his diet.

‘You can see in what state I am now, they didn’t allow me to move. They would ‘click’ automatic guns around ‘my bed, but then whey saw I wasn’t acting violelnty, and stopped that thing’.

Chaus went on to claim that he fled from his captivity while held somewhere in Vinnytsya region fearing they were going to kill him.

‘Now I am not scared for life, but I see nothing happening. It has been about half a year [after the events], but they never reached out to wintnesses, nothing. It means they will try to use leverage to get me locked up in custody as courts have no chance to pass any verdict. They need to have a verdict that the man is a criminal, and it doesn’t matter much what they have done to him.’

Volodymyr Aryev touched on the issue of initial bribery charges Chaus faced back in 2016 when NABU investigators raided the judge house and found in his garden a jar with $ 150 thousand.

It was ‘one of ten provocations’ he had to deal with at the time, adding the jar even happened to be planted ‘not even in the place where my family lived,’ said Mykola Chaus.

The former judge alleged his kidnapping could have been part of some campaign that was made up by ‘some political forces’  in April, 2021.

‘But when it went bust, they decided to get rid of me. They understood that I will not agree to it. I dare to say that the people who followed me, hunted me now are gone from Ukraine’