Next month Ukraine may buy electricity in Belarus and Russia

Russia and Belarus are among the countries, in which Ukraine is going to buy electricity in November 2021.

On October 27, the state-controlled energy company ‘Ukrenergo’ held an auction for the right to import electricity in November 2021.

In addition to Slovakia and Moldova, it is planned to purchase electricity in Russia and Belarus.

The national regulator also set maximum possible limits for energy imports. Import from Russia and Belarus may make up to 3105 MW of electricity with a total value of UAH 1.18 million. 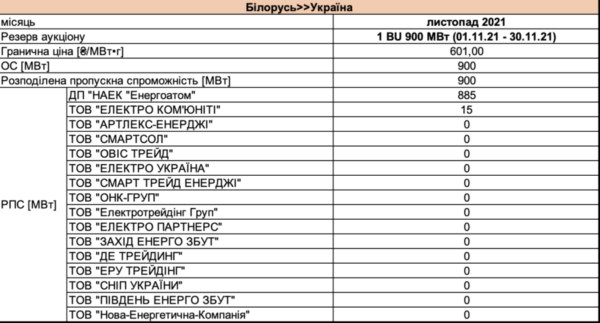 In August, energy minister Herman Halushchenko reported a shortage of coal due to an ‘abnormally low’ electricity price in April-July this year. After that, private coal power plants resumed full operation due to the resumption of coal imports. The state power plants, however, did not resume imports and currently only 3 of 27 units are operating.