The independent analytical report by VoxUkraine took a closer look at the press conference of the Ukrainian president to fact-check Volodymyr Zelensky statements. 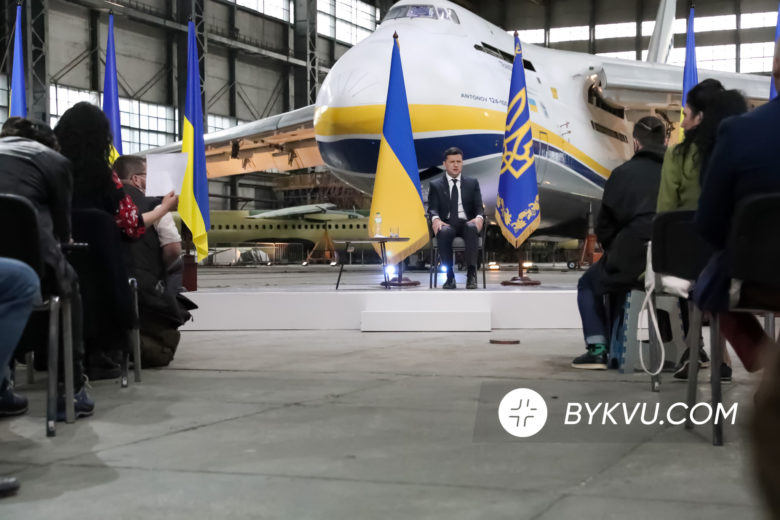 During his 3-hour press conference the Ukrainian president addressed a wide range of issues –from coronavirus to economy, corruption, and oligarchs.

VoxUkraine’s “Press conference of Volodymyr Zelensky. How honest was he with reporters’ fact-checked  17 key quotes of the Ukrainian president.

Their fact-check found that Zelensky ‘claimed credit for accomplishments of his governmental officials, the Verkhovna Rada, and his ‘predecessors’, shifting responsibility to others  and manipulating when it comes to real issues’.

VoxUkraine report showed that the biggest share of his claims – almost six out of 17 – were manipulative (35,3%), with other quotes being either untrue (2 quotes that makes 11,8%), or  exaggerative (same 11,8%), or technically invalid (5,9%).  The study found that ‘only 3 quotes -17,6%,  stood as credible’ while the last three of 17 earned no verdict for ‘those were traditional for the president ‘ifs’ and other phrases that can be checked for accuracy’.

‘Only 2 out of 8 quotes on economy are credible. The president was correct saying that our economy [rates] suffered fewer losses compared to other European countries. He was not mistaken about extra social benefits for the over 80 age group. Yet, he failed to mention that social benefits do not solve the problem of low pensions and are the reason behind the deficit of [State] Pension Fund.

The pension reform issue requires  systematic approach and so do other reforms, the judiciary one in the first place, making possible long-term savings and introduction of funded pension system. Another key moment implies that issues of minimum wages, pensions, and economy are not the president’s authority,’ claims VoxUkraine.

Claiming that his government was building ‘fair Ukraine that knows no poverty’, Zelensky said ‘it was the direction that we will have to start  building at ground zero’.

VoxUkraine experts counter the president claim by saying that ‘during the 2015-2019 poverty rates in Ukraine was going down and saw some increase in 2020 due to the crisis’ while minimum wages were considerable raised at the time of the previous government.

Zelensky exaggerated the figures on one-time ‘quarantine benefits’ for businesses saying that ‘800 thousand people’ have already claimed them. According to the VoxUkraine, ‘starting December 2020 these benefits have been issued for about 675 thousand people that is 16% less than what Zelensky was claiming.

His statement on ‘5-7-9’ debt relief scheme also proved manipulative. The VoxUkraine study found that by May 2021 ‘5-7-9’ credit scheme has seen issuance of 15,406 credit amounting to 39,5 billion hryvnas that were ‘funded by state’ while private bank interest rates stand at 8% and 15% for short-term and long-term credits respectively.

Current mortgage rates stand at 14-18%. ‘To make mortgages cheaper Ukraine has allotted 34 million for its 2021 budget meaning that so-called ‘7% interest rate’ will be also covered by taxpayers’, says VoxUkraine report.

At his press conference Zelensky claimed that average wages ‘in many cities of Ukraine’ are almost compatible with the wages Ukrainian workers earn in Poland. The comparison lacks accuracy as Zelensky fails to compare purchasing powers of Ukrainians and Poles, says VoxUksaine report.

‘In 2020, average monthly wages of Ukrainians working in Poland amounted to 4,502 zlotych. For more accurate comparison, it is necessary to take into account purchasing power parity (PPP). With prices varying, currencies have different purchasing power in different countries…Therefore, average wages of Ukrainians working in Poland was $2,515 according to PPP index .. In Ukraine average wages in 2020 stood at 14,178 hryvnas, which makes $1885 according to PPP index,’ explained the VoxUkraine experts.

According to VoxUkraine data, wages of Ukrainian work migrants in Poland is still higher than in Ukraine except for Kyiv.

In another incorrect statement, Zelensky misquoted Zakarpattya as the region that ‘has nothing’  – ‘no hospitals, no big production companies, no roads, not a single ski resort’

‘Prices of grains and metals  that are main Ukrainian exports were climbing up, which contributed to higher profits of the industries. Strong domestic demand with people restrained in their movements during the pandemic contributed VAT generated revenues. With energy prices growing, imports of oil and gas products generate more revenue for the budget,’ states VoxUkraine report.

Covid-19 and war with Russia

VoxUkraine calls the president’s claim on mode of silence ‘achievement’ manipulative – Zelensky stated that ‘for 6-7 months the situation was more or less stable’ adding that ‘numbers of shootings, inquires were 10 times fewer in comparison to other periods, with, that is the most important thing, fatalities being 10 times fewer’.

Confirming a downward trend in numbers of shootings, VoxUkraine experts argue that it is ‘premature to talk about stability’ with 28,771 ‘mode of silence’ violations recorded by the OSCE mission in Donbas.

‘According to Minsk TCG Ukrainian delegation records, ‘mode of silence’ violations were almost 10 times fewer while fatalities have reduced by 7 times,’ says VoxUkraine.

One of Zelensky statements proved ‘technically invalid’ – he claimed there were ‘no fatal Covid cases as of May 20. VoxUkraine argue that Zelensky could have quoted Covid rates’ statistics of Joint Forces Operation.

It was manipulative of Zelensky to claim that Ukraine procured contracts for ’45-47 million free Covid vaccine doses for Ukrainians’, says VoxUkraine citing National Vaccination Plan. Given it is a two-dose vaccination the procured doses will inoculate only 23 million people out of 33,9 adult Ukrainians, which makes procured doses obviously insufficient.

Zelensky also claimed that India’s Serum Institute failed to ‘grant other countries such  [big] amount of first doses’ supply’ as it did for Ukraine, which comes as obvious exeggaration on his part.

In another manipulative claim, Zelensky said that it is was not a good idea to compare vaccination rates of Ukraine and the EU alleging that Western countries had preferences in vaccine procurement.

“Now he is claiming credit [for earlier accomplishments] shifting blame to others [for losses].  He says that he takes credit for Naftogaz profits in 2019 as he was actively involved in agreements with Putin, Merkel, and Macron. However, he also mentioned Vitrenko and Kobolev,’  argue the experts.

‘If he had been the president at the time, Pavlo Sheremet would not have been killed and we would not see cases against Yuliya Kuzmenko, Andriy Antonenko and Yana Dugar.

The president said that he was proud that during his term no journalists were killed.  A very dubious accomplishment,’ argues the VoxUkraine report.

VoxUkraine chose not to pass verdict on Zelensky unclear claim about his ‘little missteps’ when it comes to some ‘persons [acts] he feels sorry about’.