Nestor Shufrych, a Ukrainian opposition MP from OPZZh’ party and chair of the Verkhovna Rada committee on the freedom of speech says he bought earlier sanctioned TV channel ‘Pershyi Nezalezhnyi’.

Nestor Shufrych informs he was approached by the TV company staff ‘to support the journalistic team in its efforts to tell the truth, whatever it may be’.

The MP stresses that he signed an ‘agreement on his non-interference in the editorial policy of the journalistic team’, claiming he has no financial interest with Russian Federation. 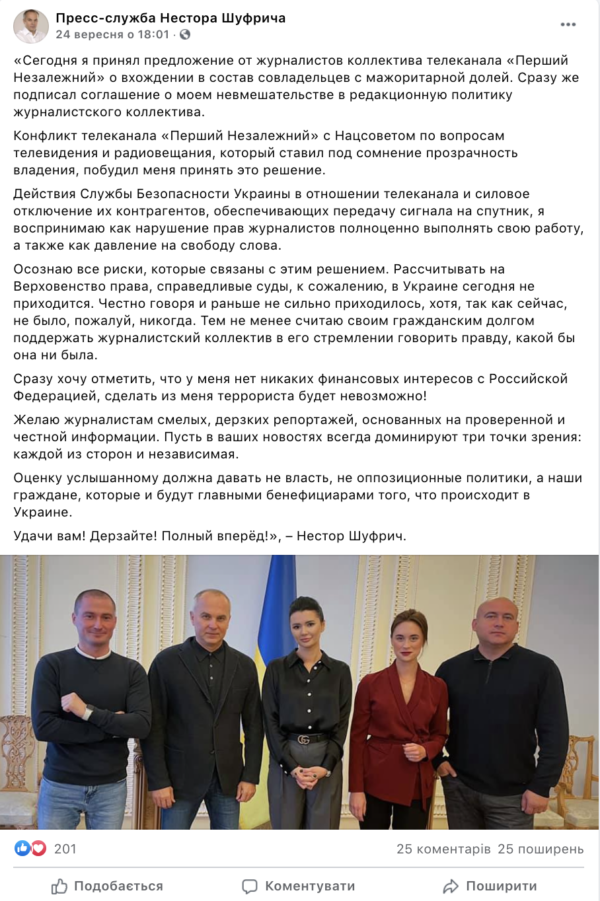 Currently, the YouControl system does not state that Shufrych owns a 60% stake in the company. Instead, the founder is ‘Mediaholding novyny’ LLC (100%).

It is worth noting state security launched inspection into the ownership of the TV channel.

Lawyer Nazar Chornyi claims there is a potential conflict of interests as Shufrych chairs the parliamentary committee on the freedom of speech and his coming into the ownership rigths of the media outlet ‘Pershyi Nezalezhnyi’ can bbe taken as violation of the law under Ukraines’ ‘On preventing corruption’ policy.

The lawyer claims that the law divides conflict of interests into two subtypes – real and potential. The second arises when a person has a private interest in the field in which he/she performs official or representative powers, which may impact  unbiased approach to decision-making.