Petro Poroshenko spars with 'Servant of the People' senior MP during a live TV interview on 'Rada' and calls it a 'shame' splashing 320 million on state TV stations while the Ukrainian army remains underfunded. 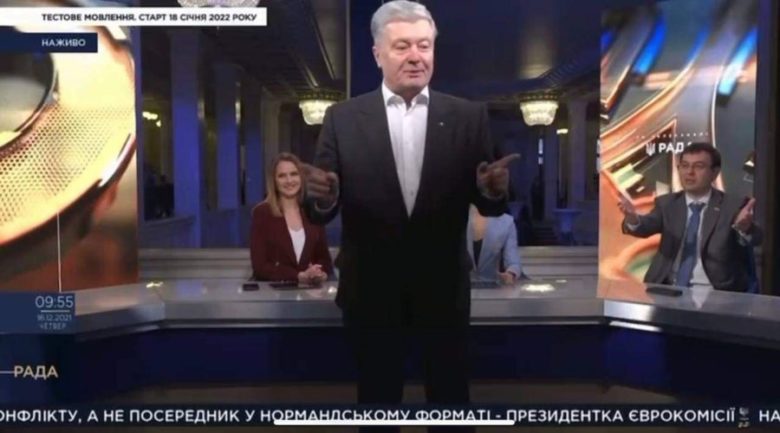 Stumbling upon a newly set-up ‘Rada’ TV studio in the parliament, ‘European Solidarity’ leader gatecrashed a live interview of ‘Servant of the People’ MP Denys Getmantsev. The unintended interruption led to an exchange of words after Getmansev fumed it is ‘Poroshenko’s thing to cause scandal on live TV’.

‘There were no spending estimates, the costs were not filed in state procurement database Prozzoro. It is an absolutely corrupt scheme’, added Poroshenko before storming out of the studio setting.

Petro Poroshenko claimed the government wants to use state media as a publicity tool  to prop up their ‘ratings’ plagued  by ‘Gogiashvili [scandal], [revelations about] Zelensky’s close circle friends, Pandora Papers offshore companies, and this Wagnergate’.

It is a ‘disgrace’ and a ‘crime’ that public funds are also misused to smear ‘opposition, opposition leaders, and international partners’, added ‘European Solidarity’ leader.

Another ‘madness’ is to spend ‘over half a billion’ on one more state-run ‘Dom’ TV channel promoting Russian-language content in Ukraine.