Politicians, public activists, and Donbas war veterans are joining a chorus of calls for a ‘flash mob’ meeting of Petro Poroshenko on his return to Ukraine amid his unlawful indictment

With his assets frozen and looming arrest over questionable allegations, Petro Poroshenko has found an unexpected support on social media.

Dozens of public activists and Donbas war veterans joined a social media campaign set to offer him a welcome reception on his arrival in Kyiv.

In his earlier statement, Petro Poroshenko who is currently abroad, said he was planning to come back on January 17 arguing it is not about defending himself but more about defending  Ukraine from ‘incompetent officials and foreign aggression’.

Former infrastructure minister Volodymyr Omelyan was among the first who voiced support for the idea. In his comments for Bukvy, he said that ‘all of us are waiting for Petro Poroshenko. We are with him and we believe he is the only worthy president Ukraine has had in last 10 years’.

Kyiv council representative and Donbas war veteran Oleksandr Pogrebyskiy said he would come to Boryspol airport to welcome Poroshenko back.

‘He wouldn’t leave  the country and its problems. He is set to return on the 17th! We will all come to meet him! It does mean a lot to me’.

Another Kyiv politician Gen.Viktor Kononenko confirmed he would be among the crowd of people meeting Poroshenko at the airport next week.

Leader of ‘Braty po krovi’ veterans’ group Glib Babych called on ‘conscious’ people to join the event and bring along ‘warm clothes, tea, and sense of unity’. He also warned that no ‘boors’ would make Ukrainian people betray their own country and agree to ‘reconciliation’ referendum.

Kyiv council representatives Lydmyla Kovalska and Vadym Storozhuk wrote on Facebook they both would attend the event with Storozhyk calling the situation in Ukraine a ‘new reality’ that sees 7.9% inflation and ‘collapsing economy’. 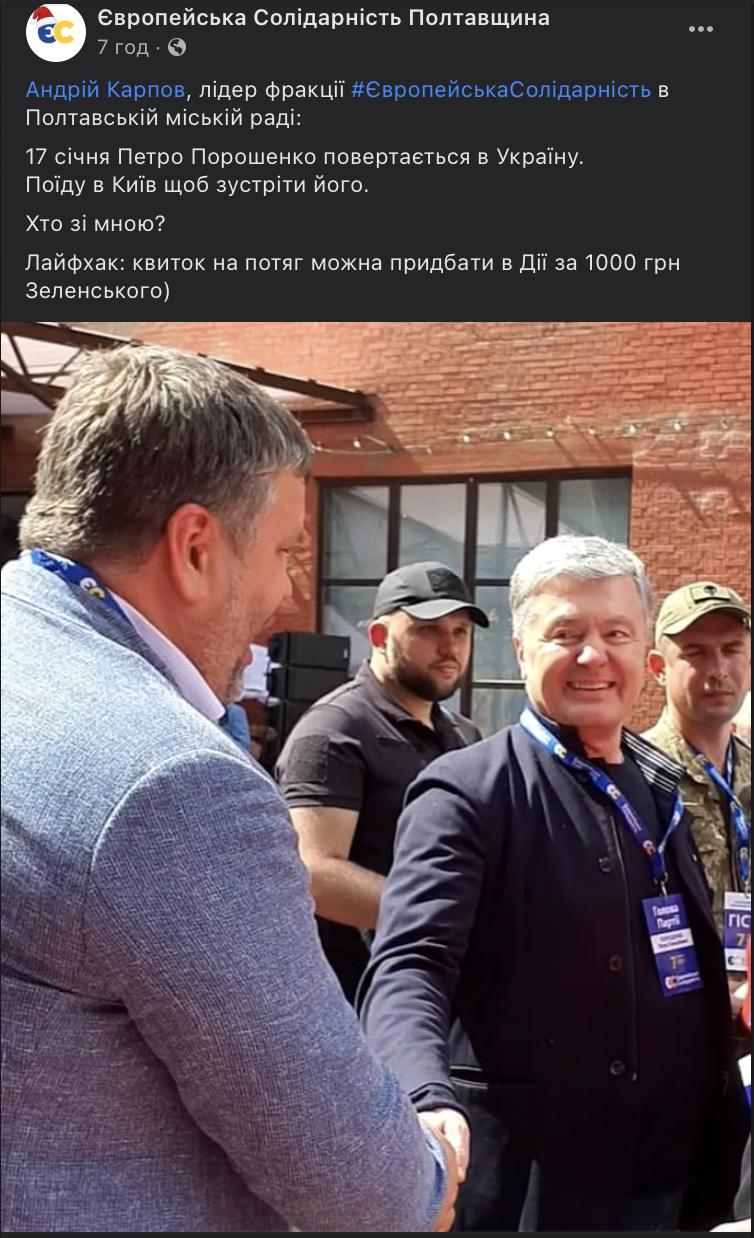