The former president and opposition leader Petro Poroshenko met with Margareta Söderfelt, the chair of the OSCE Parliamentary Assembly. 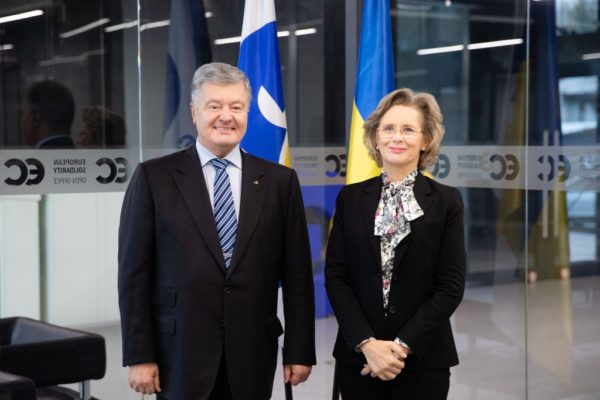 The meeting addressed  the situation in the occupied territories of Donetsk and Luhansk regions and release of Ukrainian prisoners in Russia.

Acording to ‘European Solidarity’ party press service, Margareta Söderfelt and Petro Poroshenko discussed in detail the security situation in the occupied Donbas. The parties strongly condemned the decision of the Russian Federation to block the mandate extension of the OSCE mission at Ukrainian-Russian border.

Margareta Söderfelt said she was ‘disappointed’ over Russia’s decision not to extend the OSCE Border Observer mission that proved to be effective  ‘eyes’ ensuring there were no violations.

The parties gave credit to OSCE SMM effort in bringing back peace to Donbas stressing how important it to keep its Mission involved in the region.

‘Day after day, the heroic observers of the OSCE mission presented to the world community credible information about the Russian occupation of Ukraine. I was very disappointed that Russia blocked the continuation of this mission in 2021’, said Petro Poroshenko.

He also expressed confidence OSCE could be part of effort urging Russia to release political prisoners in the occupied territories.

Margareta Söderfelt and Petro Poroshenko also paid special attention to the issues of Crimea de-occupation, challenges to democracy in Ukraine, problems of ensuring the rule of law, judicial reform and ensuring freedom of the media.

Söderfelt and Poroshenko stressed that an effective fight against corruption must remain among Ukraine’s urgent priorities.