MP Geo Leros claimed Volodymyr Zelensky had a secret meeting with ex-judge Mykola Chaus before he was 'officially' found in Vinnytsia region after the abduction in Moldova.

In his Monday statement on Facebook, Ukrainian MP Chaus revealed Zelensky met Chaus citing ‘reliable’ sources with knowledge of the matter.  Zelensky agreed to meeting with the fugitive judge after the latter  insisted on it assumingly refusing further cooperation with investigation.

‘Zelensky did meet with Chaus… Moreover, this had happened before Chaus was officially found! Now, do you understand why the SBU denies access to him to anyone? I have this information from a reliable verified source’, Leros claims. 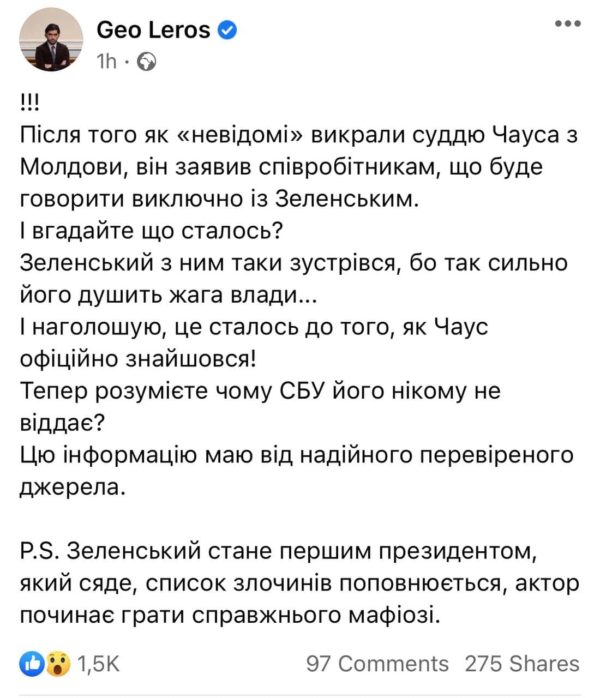 ‘The President of Ukraine did not meet with judge Chaus’, Nykyforov wrote.

Geo Leros is an MP who ran for the Verkhovna Rada on the list of the pro-presidential party ‘Servant of the People’.He also was Zelensky’s adviser. In September last year, Leros was expelled from the party following his public accusations claiming  Ukraine’s president was  ‘merging with the old system’.

Since then, Geo Leros has been criticizing the president and his party. In addition, he often publishes insights on provocative topics.

Former Prosecutor General Ruslan Riaboshapka also stated that Zelensky had a meeting with Chaus. Moreover, according to his insider information, there were two such meetings. Riaboshapka said this on the air of ‘Priamyi’ TV channel.

Ex-judge Chaus, who had been kidnapped in Moldova, was unexpectedly found in Vinnytsia region on July 30. The lawyers were denied access to the detainee for three days.

Chaus was to be detained by the National Anti-Corruption Bureau officers. However, he was intercepted by the Security Service. Details in ‘Bukvy’ article.

The Supreme Anti-Corruption Court will consider the measure of restraint for Chaus on Wednesday, August 4.

Mykola Chaus is an ex-judge of the Dniprovskyi District Court of Kyiv, known for making verdict in trials set against Avtomaidan activists. He was subject to lustration, but was not lustrated.

On August 9, 2016, the National Anticorruption Bureau detectives detained Chaus on a $ 150,000 bribe. However, the judge was not taked into custody due to his  judicial immunity.

On November 28, 2017, the High Council of Justice dismissed Chaus from the position of a judge. In October, Interpol declared Chaus wanted.

He was found in Moldova. On July 11, Ukrainian President Volodymyr Zelensky asked the Moldovan government to facilitate the extradition of Mykola Chaus.

A video was released showing the moment of the abduction. Subsequently, the Moldovan media, citing ‘Index’ Telegram channel, stated that Chaus had been taken to Ukraine in a Toyota RAV 4, which allegedly belonged to the Ukrainian embassy.

Later, the same channel reported that the military attaché of the embassy Serhii Smetaniuk was allegedly driving the Toyota RAV 4.