During a three-hour news conference on Thursday, Ukraine’s president Volodymyr Zelensky gave judgment of  his two years in office. Volodymyr Zelensky met with reporters in the hangar of ‘Antonov’ aircraft plant and for three straight hours answered questions that addressed a wide range of issues – from “Big Construction’ project and a meeting with Volodymyr Putin to ongoing struggles with Ukrainian oligarchs.

Key takeaways from his press-conference

He also stressed that his government has started ‘new judiciary reform’ at ground zero, launched ‘state in a smart phone’ state services and ‘Diya’ application that  helps over 10 million Ukrainians.

Volodymyr Zelensky announced the plans for a big military parade to mark 30th anniversary of Ukraine’s independence that will be part of 3-day festivities hosting 30 political leaders from other countries.

The reporters were showed a promotional video of planned celebrations. According to Zelensky, the Independence Day events will include ‘Summit of First Ladies and Gentlemen’ that will address ‘very important human issues that are usually are not looked into by leaders’.

On August 23 Ukraine will enjoy the concert of ‘great Ukrainians, legends of opera and ballet’ in Kyiv Opera Theater. The Independence Day will also see a Navy parade. 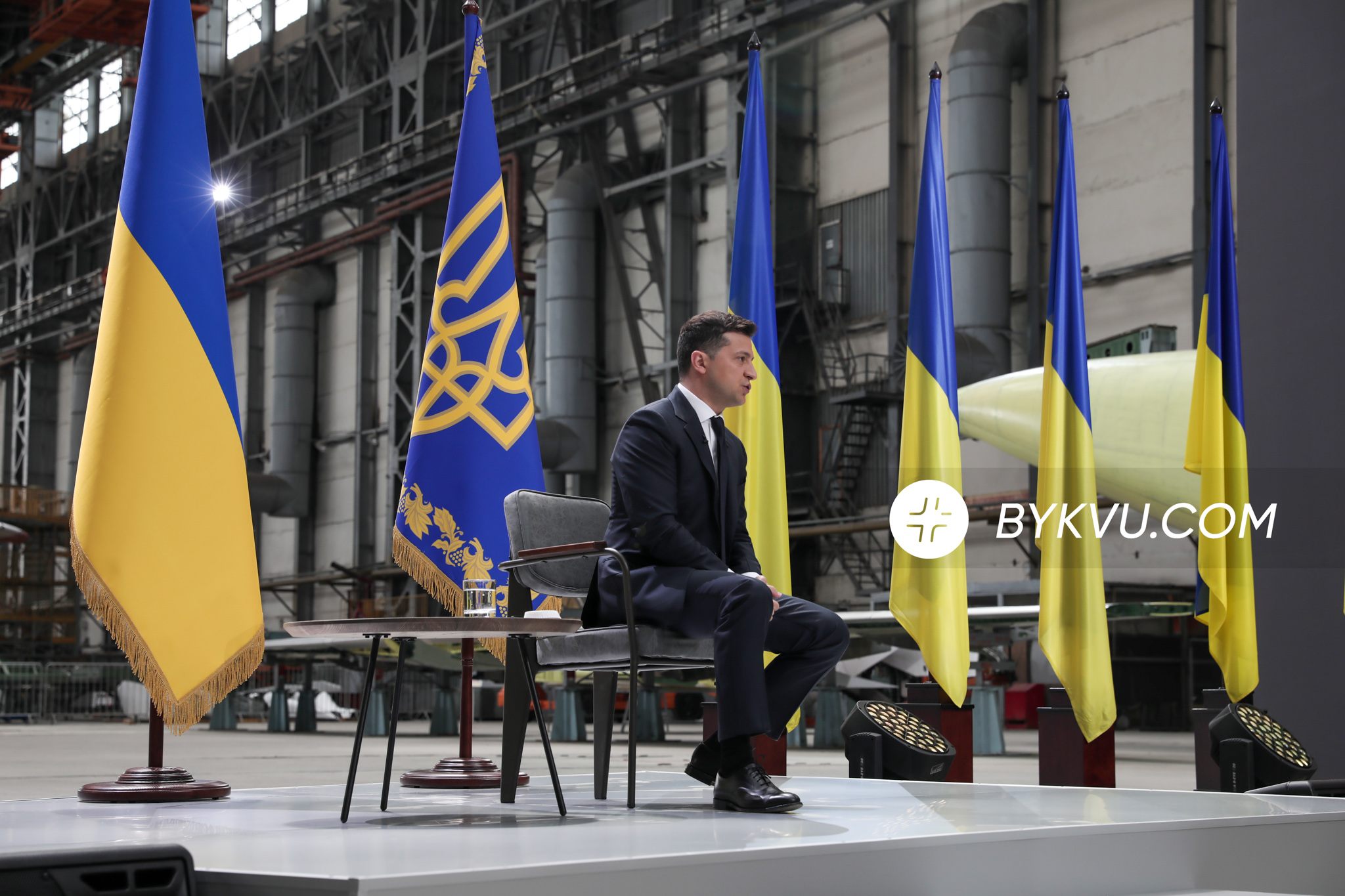 The first question at the press conferences referred to the prospects of ending a war conflict in Donbas.

‘It is not that easy’, said Zelensky claiming that ‘for 6-7 months the situation was rather stable. Well, we have numbers 10-fold lower in comparison to the other period – there were fewer shootings, no wounded [soldiers]’

‘Ending the epoch of poverty’

The president said that it is not easy to end the epoch of poverty when a lot of things do not depend on him.

‘The economy is not developing so well because of the [Covid] pandemic, but in comparison to other countries we are in a normal state’, he said.

Zelensky argued that the company has a forecast of 11 billion losses, and that made the government bring in changes to its management.

Asked by a reporter when sanctions against Kolomoysky and Firtash are coming, the president did not offer a direct answer.

‘You willl see a lot […] Watch us on Fridays,’ said Zelensky.

Zelensky failed to answer if Internal Minister will be held accountable in case the court finds the evidence in Pavlo Sheremet murder insufficient. Instead, he showed his text messages to Yana Dugar who faces accomplice charges in murder of Sheremet.

‘I do not want to give many comments on this case. I am not interfering in law-enforcement agencies’ work, in work of courts, but I will tell you in earnest- I know what is going on. And I care for it. If these people are unlawfully convicted. And the thing that they are behind the bars – I care for it. There is no 100% evidence that they are either guity or not guilty… I don’t know if she forgives me. Here, this morning Yana Dugar [wrote] to me.. We are in touch.. In other words, I care for what is going on with these people,” said Zelensky.

Zelensky said that in his team ‘you will not see people with powerful experience like Volodymyr Groysman, Arseniy Yatsenyuk and Yuliya Tymoshenko’.

On his re-election prospects

Zelensky said that ‘it is too early to talk about it’

On  oligarchs among Ukrainian MPs

A person classified among those ‘having the status of an oligarch’ will not be able to become a Ukrainian MP, said Zelensky citing the criteria for oligarchs.

‘I personally can not give names. There are main points. It is impact on media in this or that way. It is involvement in political life of the country, influence over MPs, state officials, ministers. Having a party, sponsoring a party. And, thirdly, it will be total assets, the sum of assets. I consider that the latter will influence it [decision to call a person an oligarch]. Combining all these three details – a person automatically will be [listed] in the register of oligarchs’, stated the president.

He also stressed that persons who meet these three criteria of an oligarch will not be eligible for becoming members of parliament.

On meeting with Volodymyr Putin

The Ukrainian president said that he has no time to think about Putin.

‘I am thinking about a meeting [with him] in some sort of a format that can lead to an end of the war,’ added he. 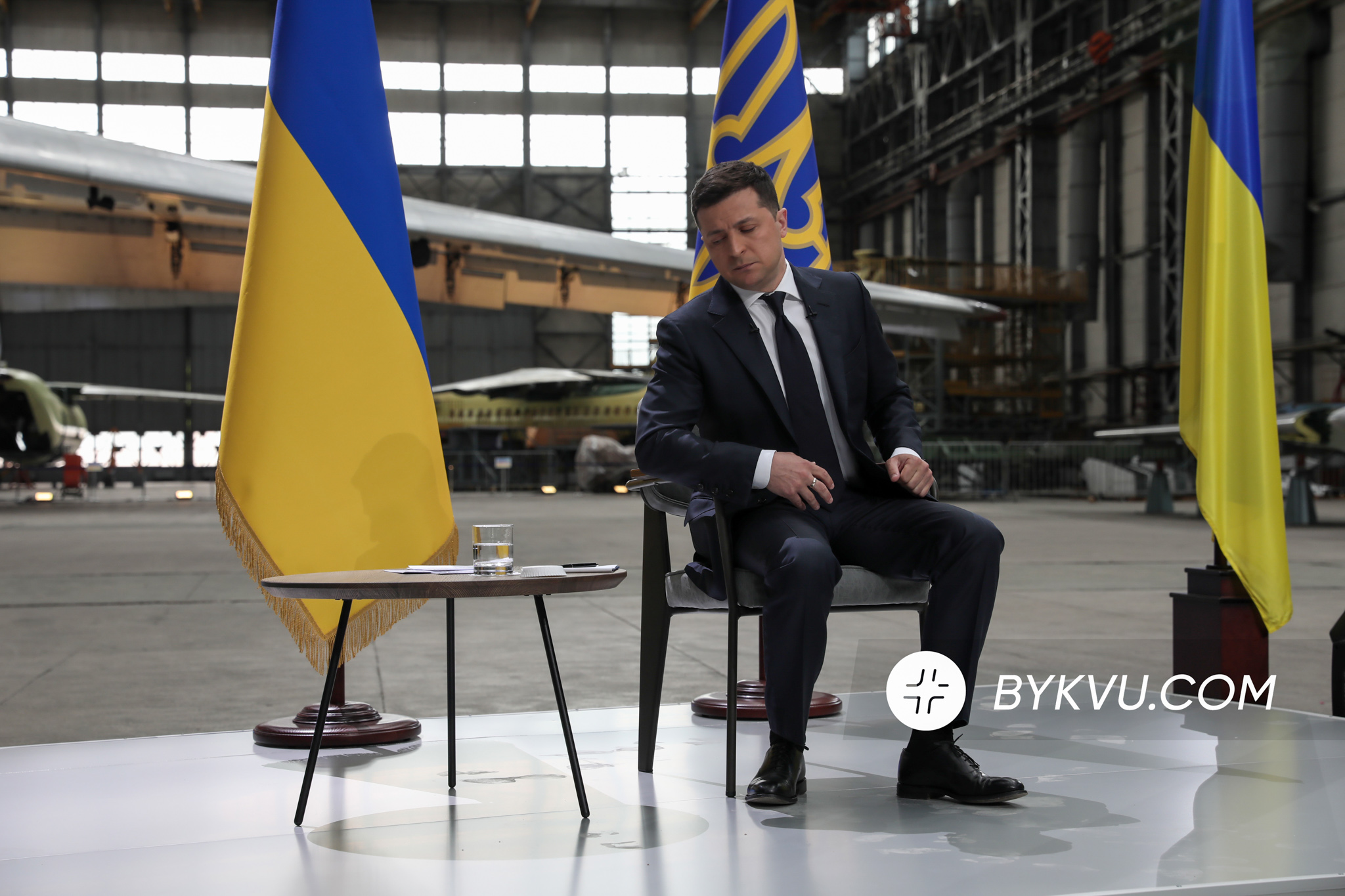 On France and Germany ‘weakening their positions on Russia’

Zelensky urged the French and German leaders to ‘give Ukraine stronger support’.

‘What’s next? The next [step has] several directions. We will keep going with ‘Normandy format’. I will have a meeting with president Macron, in the video format  with German Chancellor Angela Merkel. I feel their support. I think that they must give stronger support. They know my opinion; I am very open with them. I think that of late they have been weakening their positions on Russia,’ said Zelensky.

When asked by the journalist Dmytro Gordon about existence of some agreements with Petro Poroshenko alleging some immunity guarantees for the latter, Zelensky said that ‘I have become his conviction. He just doesn’t want to realize what happened’.

The Ukrainian president was asked how Vasyl Virastyuk became an MP despite the ruling of Ukraine’s Supreme Court.

In his final comments to the journalists, the Ukrainian president revealed that he became ‘less sentimental and more pragmatic’.

It is worth mentioning that lot of media representatives, and ‘Bukvy’ among them,  failed to ask the president their questions.