‘PrivatBank’, via the ‘Voice of Ukraine’ newspaper, has notified of the lawsuit its former owners, Ihor Kolomoiskyi and Gennady Bogolyubov, as well as their lawyer Viacheslav Kartashov. The summons concerns a $600 million withdrawal to Israel.

‘PrivatBank’ has filed a lawsuit in the Tel Aviv-Jaffa District Court, Israel, against its former owners and other defendants for alleged fraud, misappropriation and money laundering, resulting in at least $600 million was illegally withdrawn from the Bank between 2007 and 2011 and placed in a bank account with the Israel Discount Bank’, the statement of claim says.

Following the Israeli court verdict of April 26, 2021, the bank published the summons in state paper ‘Golos Ukrainy’ following the Hague Convention on the Service Abroad of Judicial and Extrajudicial Documents in Civil or Commercial Matters. 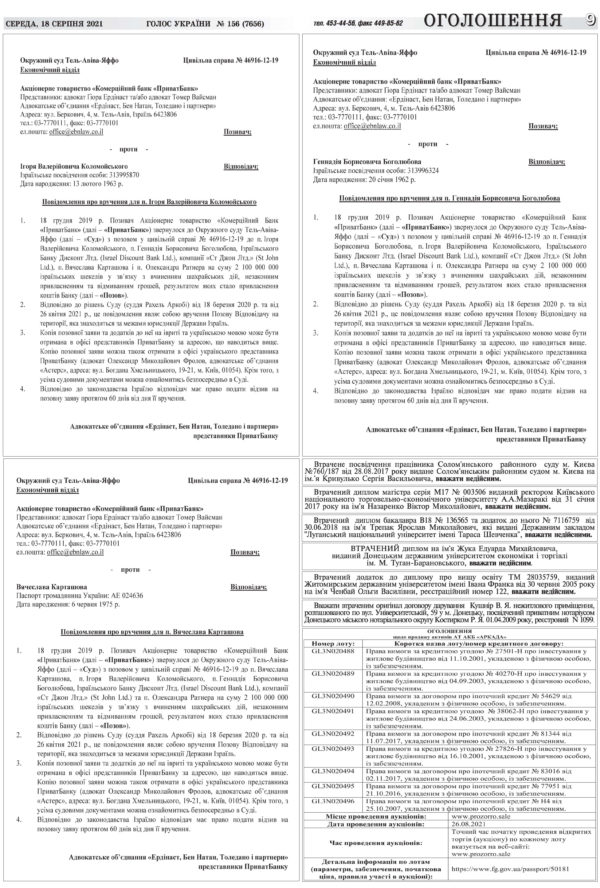 The Ukrainian government nationalized “PrivatBank’ in 2016 after paying off a hefty $5.6 billion bailout and is still locked in an ongoing litigation battle  with its former owners over the debts incurred.