On September 26, in the second period of the ‘Kremenchuk’ – ‘Donbas’ game, Andrii Deniskin shouted at Jalen Smereck, who is Black, and then pantomimed unpeeling a banana and eating it.

Andrii Deniskin was ejected from the game, and both the UHL and the International Ice Hockey Federation began a disciplinary process.

The Ukrainian Hockey League suspended Deniskin for a minimum of three games with additional 10 games that he can avoid serving if he pays a fine.

The punishment received immediate backlash from around the hockey world.

Luc Tardif, the president of the International Ice Hockey Federation ordered the IIHF Ethics Committee to investigate the incident saying that thirteen games is a lot, but not enough.

Greg Wyshynski, the the American sportswriter, also paid attention to the incident. 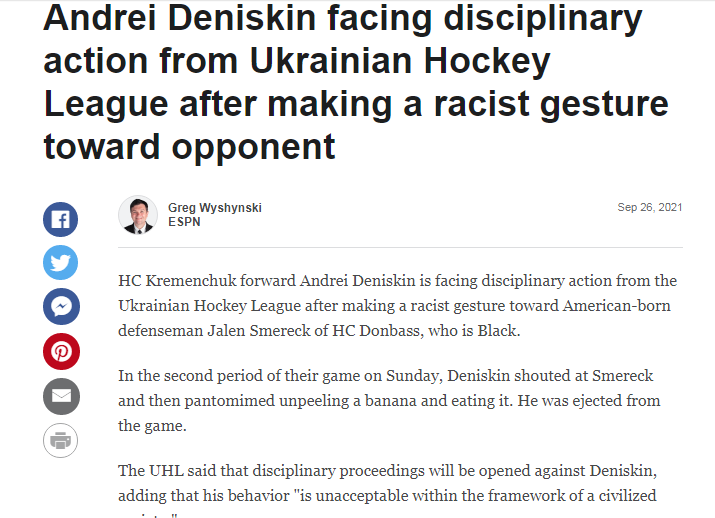 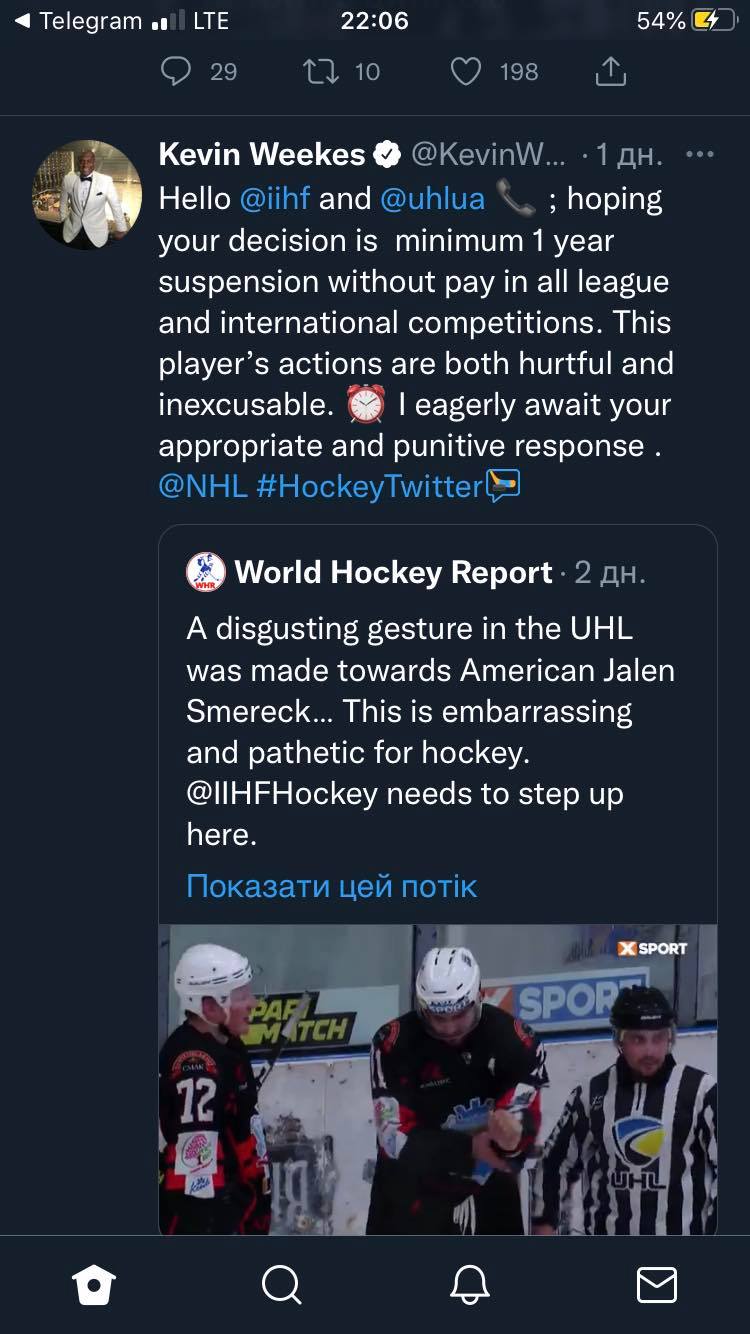 The scandal drew the criticism from NHL players. Anthony Duclair stated he was not surprised while Pierre-Olivier Joseph wrote it was disgusting. 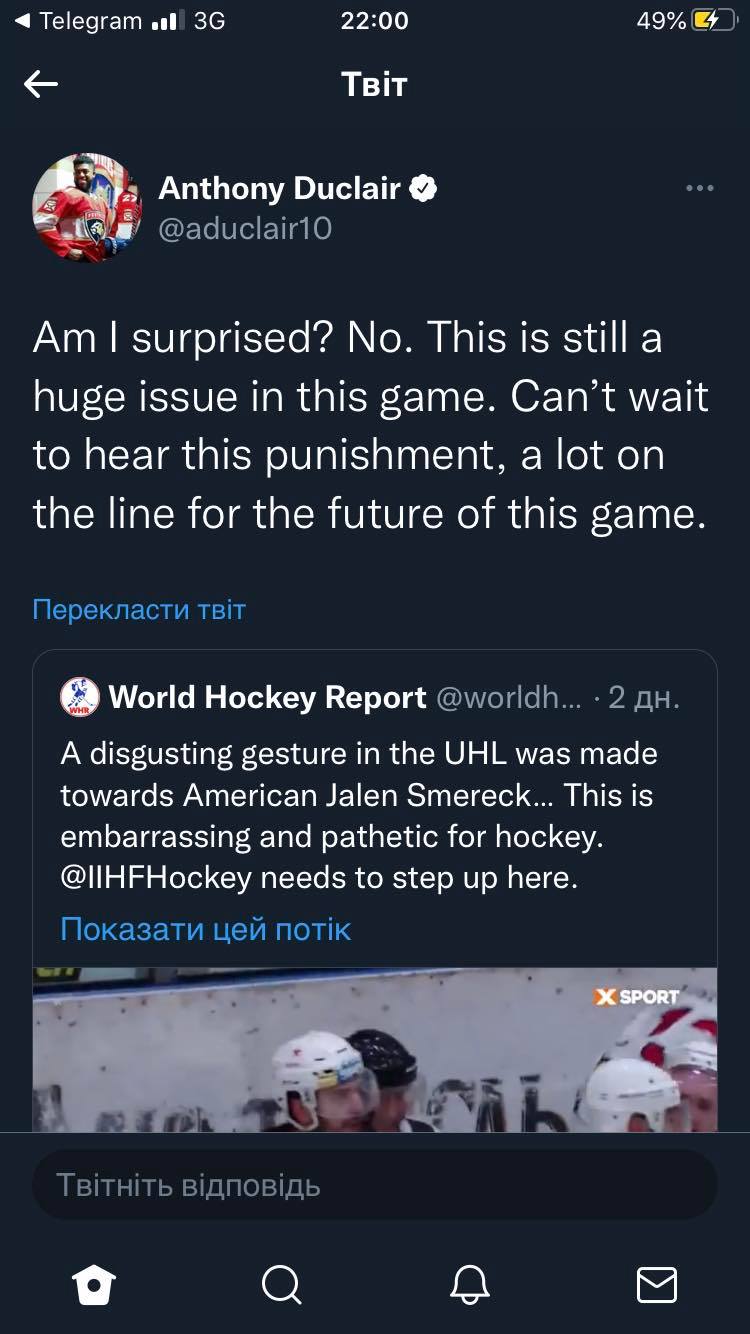 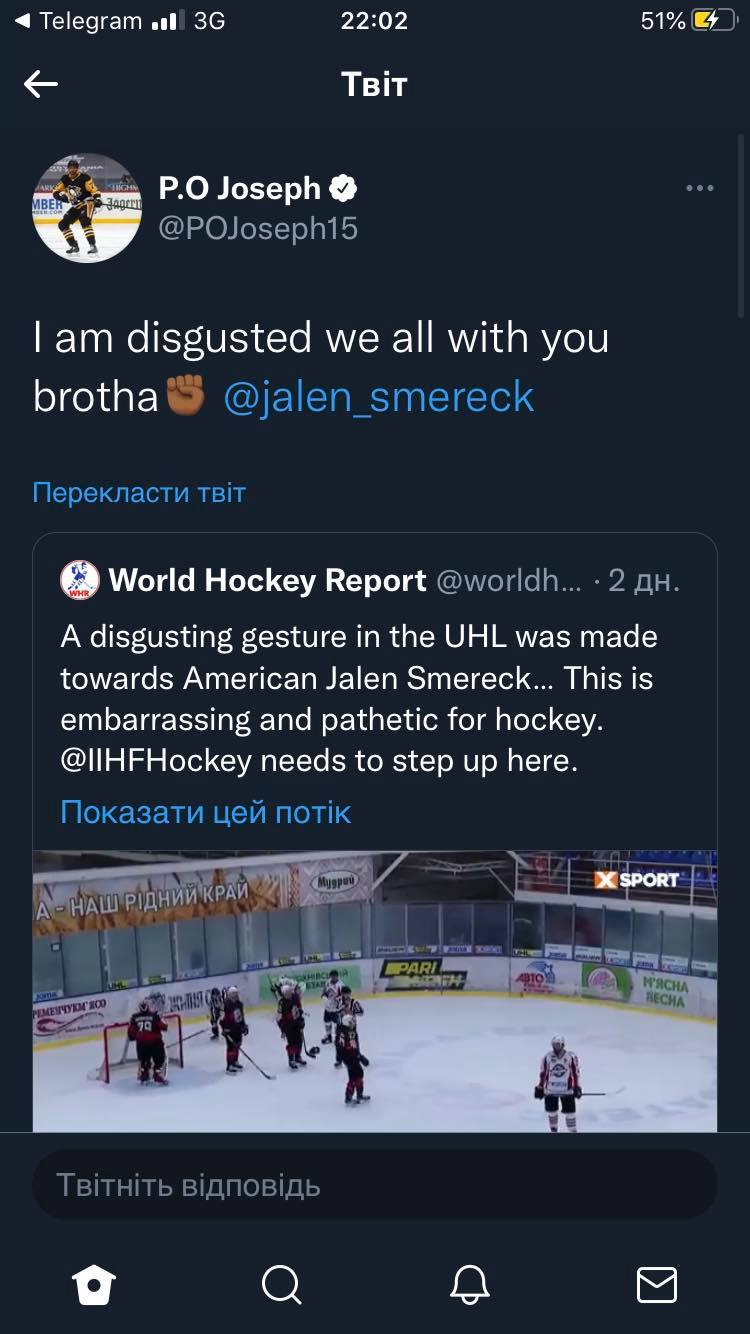 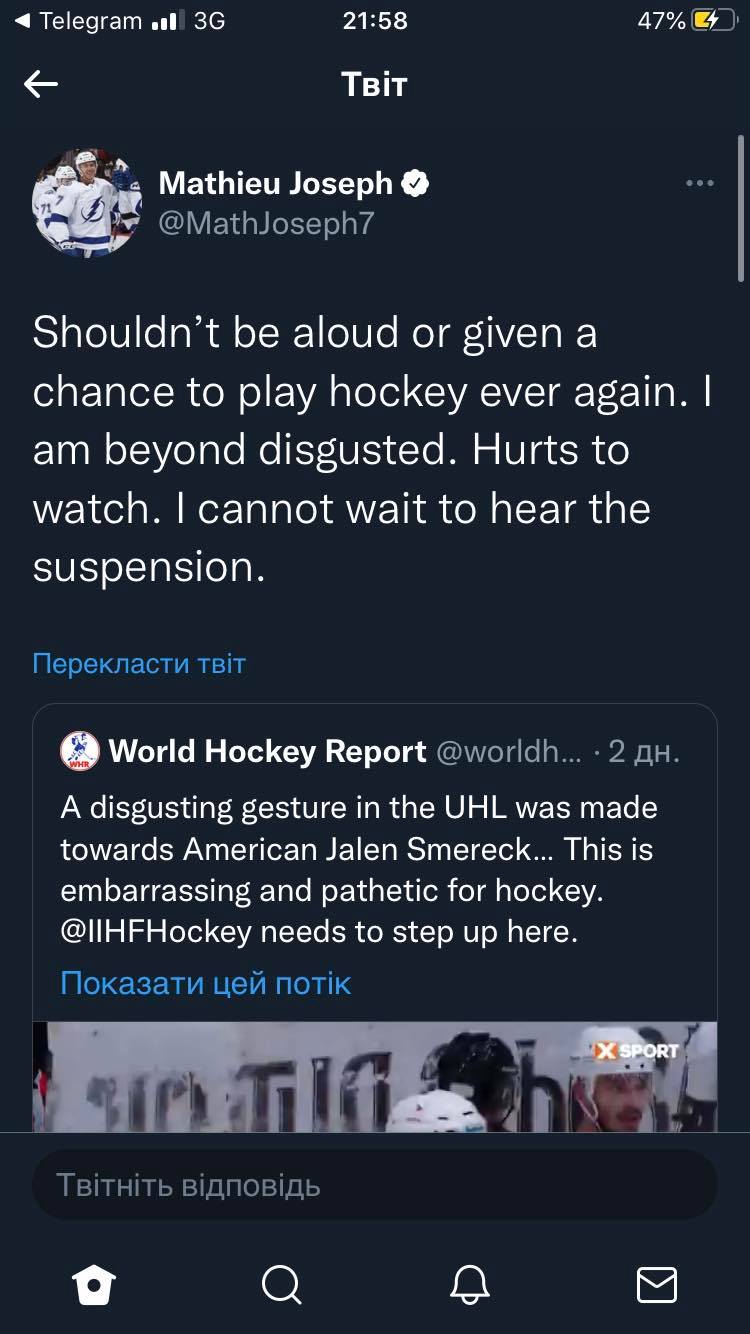 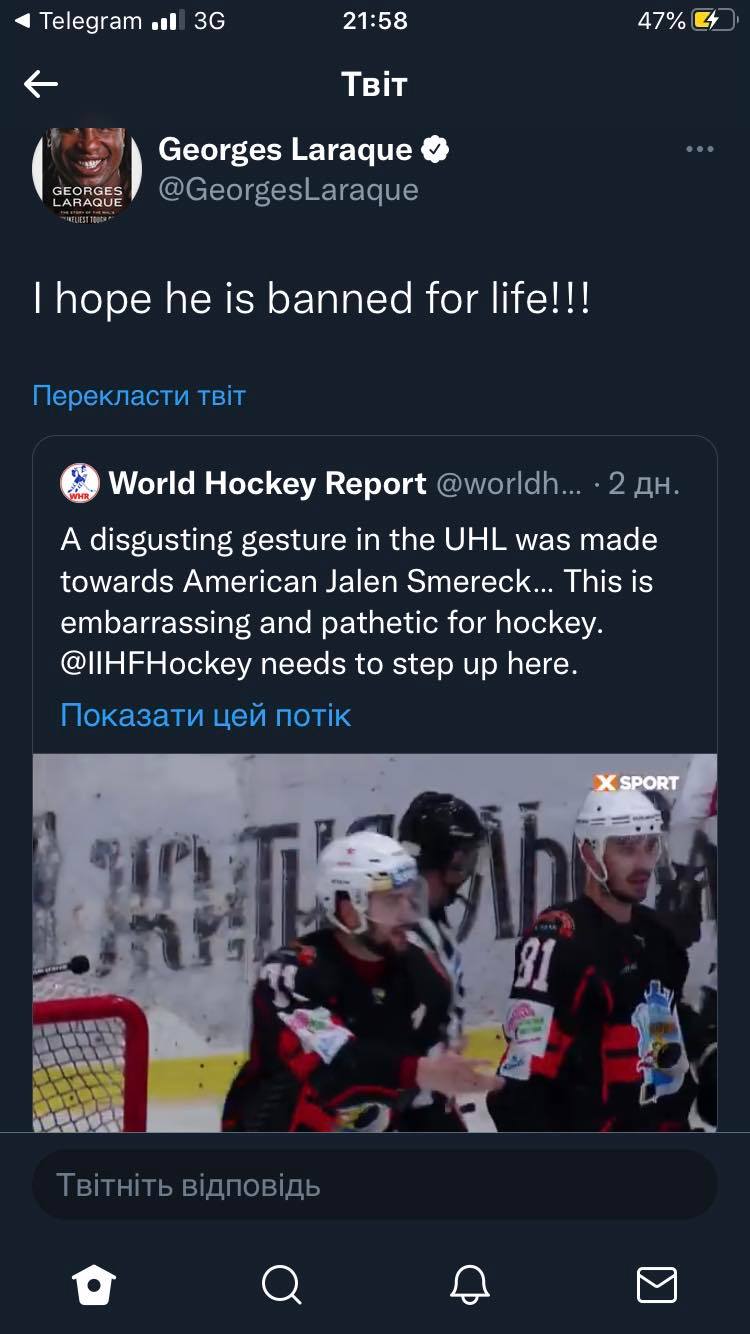 Deniskin posted an apology on Instagram, saying it was ‘a gesture that someone can consider as an insult in race’, that his emotions got the best of him, and that ‘I respect all people regardless of their race or nationality’. 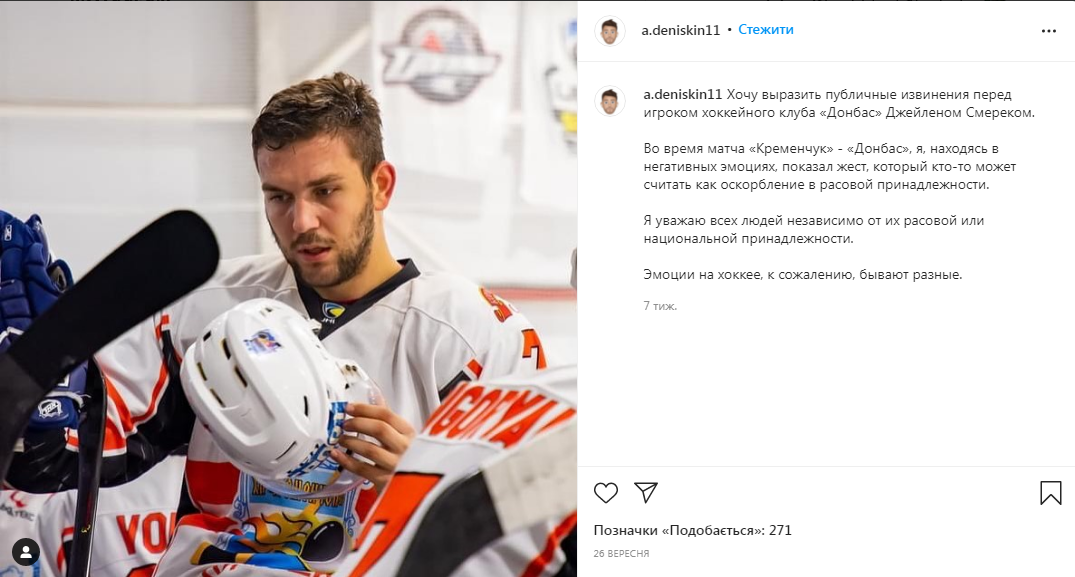 Later, Ukrainian Hockey League fired manager Eugene Kolychev after his calls for further discipline for Deniskin over the racist gesture.

‘I have spoken openly about racism in Ukrainian hockey and the Ukrainian Hockey Federation FIRED me as General Manager. Will it solve the problem? No. Will it silence me? NO!’ he wrote.

Later, Smereck left Ukraine and moved to the German League. 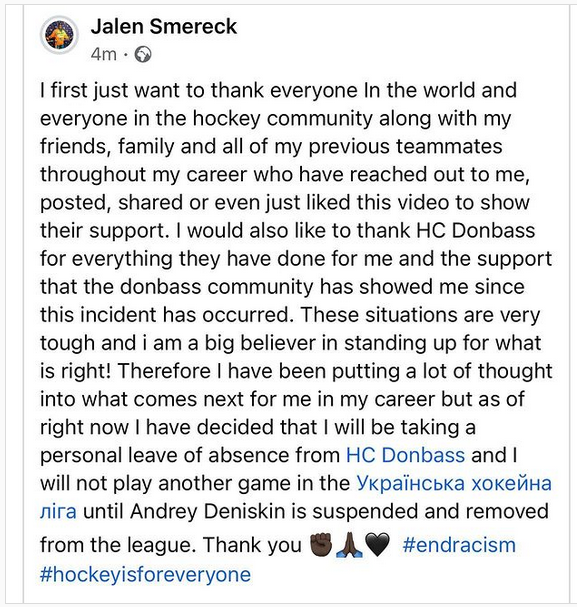 In addition, as a sign of protest, seven players of the national team of Ukraine left the location of the team at a friendly tournament in Budapest and returned to Ukraine.

On November 16, the disciplinary committee of the Hockey Federation of Ukraine punished by temporary suspension the hockey players who left the national team of Ukraine. This is stated on the official website of the organization.

At the tournament, the national team of Ukraine consisted of 22 players. However, the day before the competition, ‘Donbas’ and ‘Kramatorsk’ hockey clubs recalled their players.

Now all these hockey players are forbidden to play in official competitions during the investigation, which was launched by the Hockey Federation of Ukraine.

HC ‘Donbas’, in turn, noted that the decision violates the labor legislation of Ukraine.

In a comment to ‘Bukvy’, the press secretary of the Hockey Federation of Ukraine Ivan Verbytskyi noted that the gesture of Deniskin ‘was similar to racist, but it was provoked’.

‘This is hockey. There are many words on the ice, many things we do not see. When they provoke each other. When hockey players knock each other down during a game, it is noticeable, and when they call each other names, it usually goes unnoticed…This is the specificity of the sport. Racism is now widely speculated about in various countries. Deniskin also lived in the United States and coexisted there with people of different races. By no means, I do not consider him a racist. It is just emotions played on him at that particular moment…I do not think that such attention should be paid to this case.’ Verbytskyi said.

While writing this article, we found a photo of the press officer, in which he shows a gesture similar to a Nazi salute.

In a comment to ‘Bukvy’, Ivan Verbytskyi denied this was a gesture of Nazi salute.

‘This is not a salute…I do not remember what we showed then. We were just playing fools…Just until recently there was a time when you could be open and not be afraid that a photo will be perceived in a special way’, Verbytskyi stated.