Ukraine offered consultations in Vienna on Russia’s nearing troops to the Ukrainian border but Russia said "no" to it, informs Lithuania’s OSCE representative. Russia’s refusal to explain its military movements near Ukraine came from Lithuania’s OSCE representative on Twitter:

“Russia refused to take part at the consultations initiated by Ukraine under the OSCE Vienna Document. It refused to provide detailed explanations on its large-scale military build up and unusual movements of its forces at the state border of Ukraine”. 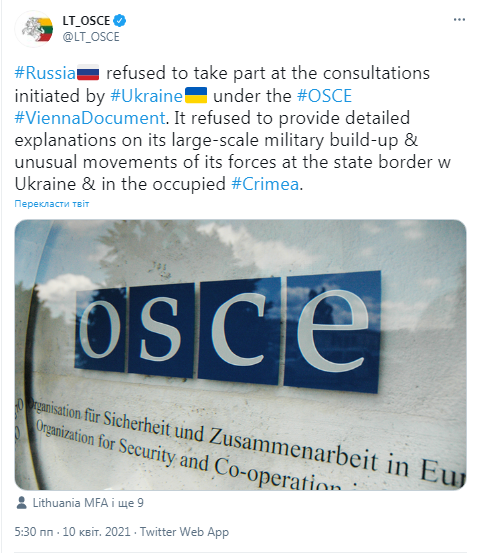 The information was later confirmed by the US mission to OSCE.

“Russia declined to participate in today’s OSCE meeting with Ukraine to explain its unusual military buildup on Ukraine’s borders and in occupied Crimea”. 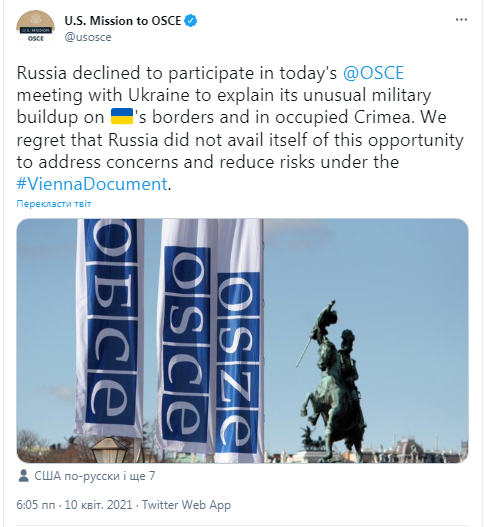 On April 1, Ukraine’s intelligence informed that Russia could “undertake substantive military provocations” and move its troops into the Ukrainian territory. The day before, Ukraine’s Commander-in-Chief Ruslan Khomchak accused Russia of amassing its troops on the Ukrainian border. Citing intelligence, he revealed that in March Russia stationed its 28 tactical groups in the border regions of Bryansk, Voronezh. Russia’a military build-up on Ukrainian border was also reported by independent Conflict Intelligence Team (CIT) that found Russian troops mounting a big field camp near Voronezh.