On August 24, the Independence Day of Ukraine, Russian occupying authorities are planning to organize a ‘court trial’ for the Ukrainian prisoners of war who defended Mariupol.

The Main Directorate of Intelligence of Ukraine’s defense ministry reports that the occupiers are reconstructing the building of Mariupol Philharmonic for the ‘trial’.

The invaders are mounting iron cages on the stage of the philharmonic hall, in which they will keep the Ukrainian defenders. In addition, several new temporary structures are being erected next to the premises. 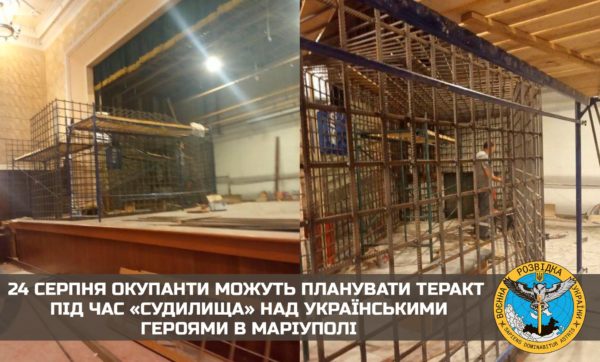 The intelligence notes that in order to make this action ‘legitimate’, the occupiers are preparing specially trained ‘witnesses’ and bringing in representatives of Russian propaganda TV.

According to one of the possible scenarios of the occupiers, they can hit the premises with a missile attack and then to blame Ukraine for the crime.