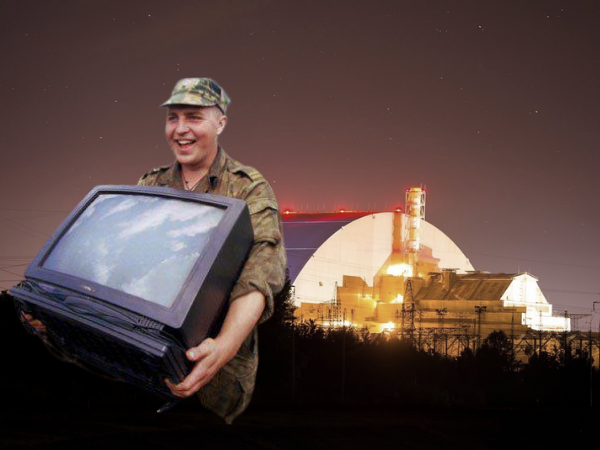 Computers, electric kettles and tableware are among the things stolen by Russian troops while withdrawing from the Chernobyl nuclear site, said Yevhen Kramarenko of the Exclusion Zone agency.

In an interview for the UA TV-marathon, the Ukrainian official said the Russian troops had started to pull back their units from the site on March 31.

Before leaving Chernobyl, the Russian troops forced the nuclear site management to sign a document confirming the plant’s handover back to Ukrainian control. They threatened the site shift managers would be deported to Belarus if they refused to do so, said Kramarenko

‘After the document was signed, the soldiers started to loot the site, taking out things and packing them into the military vehicles parked at the site, and they left.’

The site personnel were ordered to stay in offices and monitoring rooms. They dared to step out an hour later when they made sure the Russian convoy was gone.

The first estimate showed the site was not damaged with all monitoring systems being visible intact.

‘We will need to make sure in a day when we will be able to send the qualified workers to check out the technical condition of all the objects.’

According to Kramarenko, radiation levels gauged once the Russian units left appear to be normal.