‘Slidstvo.Info’ reporters named the SBU official who allegedly interfered with the public showing of ‘Offshore 95’ documentary.

The preview screening of a documentary about Zelensky’s offshore companies suffered an unexpected delay after the the alleged interference of a SBU official.

‘Offshore 95: secrets of president Zelensky’s business’ documentary , produced by ‘Slidstvo.Info’, was set to be shown at Kyiv municipal ‘Mala Opera’ house but was called off by the venue administration over claims they had ‘repairs going’ after a ‘power failure’.

Slidstvo. Info found tha  the cancellation was prompted by a phone call of the state security service officer who threatened the venue ‘will have problems’.

The alleged officer was tracked down after Kyiv mayor advisor Oleksii Hrytsenko posted the screenshot of the callee phone number on social media. 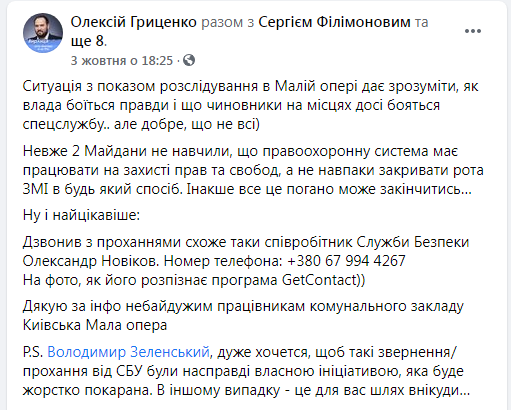 The SBU officer, identified as Oleksandr Novikov, denied his involvement with disruption of the preview sceening, arguing that he called Kyiv officials over some ‘work’ issues.

‘I did not phone with threats. Honestly. I have other current issues and I have to work them out [with Kyiv officials]’, stated Novikov.

In response to media requests, the SBU said ‘they do not interfere with journalists’ activities’.

The documentary ‘Offshore 95: secrets of president Zelensky’s business’, produced by ‘Slidstvo.Info’,  was made part of Pandora Papers report.

The alleged involvement of president Zelensky in money laundering sparked protests in Ukraine and abroad.