The political advisors to “Normandy format” leaders who held a round of discussions on April 19 assigned the Minks TCG security subgroup to update the monintoring measures to strengthen ceasefire in Donbas.

On Tuesday, at the TCG Security subgroup emergency meeting the Ukrainian representatives submitted the draft of amendments to ‘Measures to strengthen ceasefire’ agreement of July 20, 2020, which was agreed to in principal.

“Thanks to the professional assistance of coordinator of the subgroup on security, head of the OSCE SMM mission, Ambassador Yasar Halit Cevik, the parties passed the first reading in full … The Ukrainian draft Addendum was taken as a basis,” the Ukrainian delegation said on its Facebook page following an emergency meeting of the security subgroup on Tuesday. 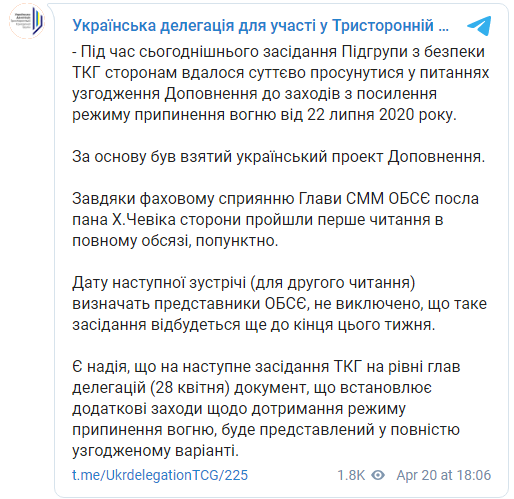 The Ukrainian side expressed hope that the document would be finalized by the time of the next meeting of the heads of TCG delegations.

The Ukrainian official comments cited a “marked progress”, though Sergiy Garmash, the Ukrainian TCG representative who failed to be present at the last meeting, argued that “it brought no tangible results”.

In his comments to Ukraina24 TV, Garmash said that “you could not expect much of it in the situation when the political advisors to Normandy leaders failed to reach any achievements. But you have to take it as a positive thing that the subgroup has managed to bring all sides together [for a meeting]“.

According to Garmash, the TCG subgroup emergency meeting was initially called following the latest civilian death in the occupied Donbas. Ukraine insisted emergency meeting should be called to address both military and civilian casualties.