Arestovych says Russian detainees were exchanged without ‘any investigative actions’. ‘Bukvy’ fact check
17:46 Misquotes and inaccurate claims from ‘Kryvbas’ battalion representative on a ‘1+1’ TV talk show
16:30 Zelensky signs a decree ‘On Strategy for Development of Justice System’
08:23 Russia’s troops at the border are still a threat , Ukraine’s Foreign Minister Kuleba

15:04 Maluska stated that Poroshenko is automatically getting on the register of oligarchs

21:38 Oligarch status question will be the first to be put to referendum — Zelensky
20:02 Poroshenko calls for investigation into purchasing coal and electrical energy from the Russian Federation
19:06 Peacekeepers, terrorism, and Ukraine’s integration in NATO: Ukraine’s National Security and Defence Council considered eight issues
18:16 Germany and France should bear responsibility for the occupation of Crimea, — Danilov
18:09 New ‘Ukrainska Pravda’ owner gives first interview, avoids to address past controversies
15:38 Party of Regions ex-MP Mykola Levchenko is back to Ukraine: Details

Tougher sanctions and no energy imports from Belarus, Petro Poroshenko on arrest of Roman Pratasevich

In his Facebook statement, Petro Poroshenko proposed to widen Ukraine’s sanctions against Belarusian authorities, which should include:

He also called on Ukrainian intelligence services to reinforce their efforts to ‘neutralize threats to life and health of Belarus tyranny opponents who have found shelter in Ukraine’.

‘Introduction of new sanctions against the Belarus regime and its Russian patrons must come as an adequate response to brutal violations of democratic principles by Lukashenko. I am calling on the EU, the US and other partners of ours to impose the similar sanctions against Belarus, and Ukrainian authorities to immediately introduce its sanctions and synchronize them with the international ones,’ stressed Petro Poroshenko.

The Ukrainian politician condemned the methods used by Oleksandr Lukashenko against his political opponents.

‘I strongly condemn the barbaric methods of Lukashenko regime… Roman Pratasevich and other political prisoners should be immediately and unconditionally set free. Rights of Belarus opposition must be secured. Last year, in August, I stressed that only new presidential elections in line to the high standards of OSCE can set a path for Belarus to a stable democratic development. Now it is obvious that Lukashenko will not be able to take part in these elections,’ said Poroshenko in his statement. 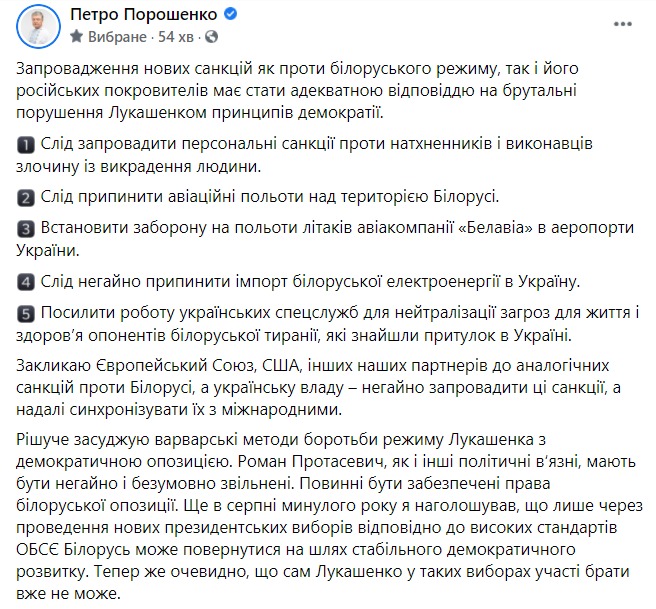 He added that by no means this criminal act of Belarus regime can spare ‘Russian spies in the Ukrainian government of the punishment for secret information leaks to Russia on capture of mercenaries from Wagner’s Russian private army’.

To dismiss the allegations that Ukrainian authorities could violate international laws staging the capture of Russian mercenaries in Minsk, Poroshenko remainded that “Lukashenko unlawfully detained the opposition activist, while the Ukrainian special operation was staged to bring to justice dozens of war criminals from Russia who killed people in Ukraine and other countries, which makes it inappropriate to draw parallels between operation of our intelligence service that aimed to defend Ukraine from Russian aggression and kidnapping of the opposition figure on order from the Belarus dictator,’ stated Poroshenko.