The former presidents of Ukraine Leonid Kuchma, Viktor Yushchenko and Petro Poroshenko called on the world community, EU, the USA, Canada, China, Turkey and the UNO to help save Ukrainian civilians and soldiers besieged by the Russian troops in the Azovstal plant.

The statement was posted on Petro Poroshenko’s Facebook page.

Ukrainian presidents request for all available diplomatic resources to help the Ukrainian authorities save the lives of civilian and military Ukrainians whom Russia is trying to destroy with barbaric methods in the territory of the Azovstal plant.

‘Such shocking brutality of the rushists is devoid of any military meaning. The city of Mariupol is almost completely destroyed by the Russian army, which is now trying to hide the traces of its crimes’, the statement says.

The extraordinary courage and heroism of the Ukrainian soldiers-defenders of the city impressed not only Ukraine, but also the whole world. The Azov Battalion, Ukrainian Marines and border guards have already entered the history, because their military feat is unprecedented.

However, this is no longer just a war battle. This is an attempt at bloody revenge and massacre over those who have not surrendered and have already won victory of their spirit and willpower.

Ukrainian presidents called on all leaders to join in saving the lives of heroic Ukrainians.

‘Dozens of millions of Ukrainians look to you with hope, and all the peoples of the civilized world will applaud you with gratitude for your successful mediation’, the statement goes.

Petro Poroshenko added that he was ready to personally join the negotiation process on the release of Azovstal defenders, together with international and Ukrainian officials, and to personally participate in the implementation of this procedure. 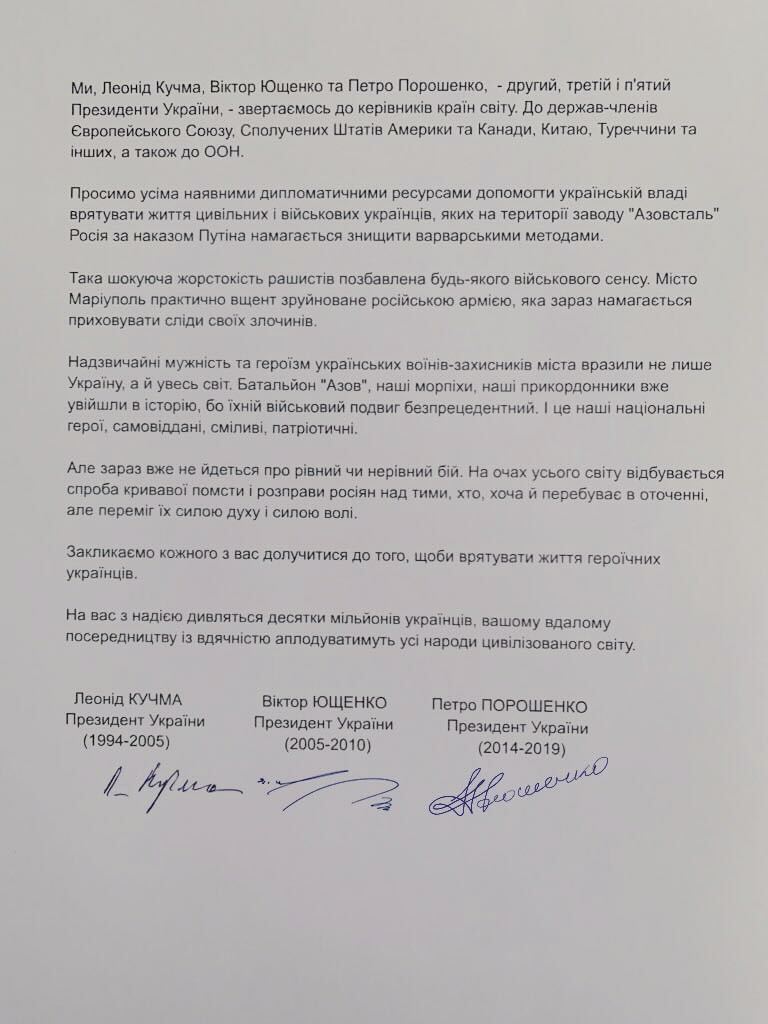