Arestovych says Russian detainees were exchanged without ‘any investigative actions’. ‘Bukvy’ fact check
17:46 Misquotes and inaccurate claims from ‘Kryvbas’ battalion representative on a ‘1+1’ TV talk show
16:30 Zelensky signs a decree ‘On Strategy for Development of Justice System’
08:23 Russia’s troops at the border are still a threat , Ukraine’s Foreign Minister Kuleba

The government greenlights establishment of Economic Security Bureau that is set to address corruption in Ukraine’s economy and finance.

Subordinate to the Ukrainian government,  the Bureau of Economic Security will act to  prevent and counter crimes in economy and finance.

Earlier adopted by the Verkhovna Rada,  the law no. 1150-IX ‘On Bureau of Economic Security’ was signed by the Ukraininan president  Volodymyr Zelensky on March 22.

Anouncing the launch of the new govermental body, the Ukrainian PM Denys Shmygal said that the Economic Security Bureau comes as ‘a final step toward phasing out of tax militia’ that will ‘put an end to pressure on businesses’ and is pioneering ‘a new analytical approach to investigation of economic and financial crimes’. 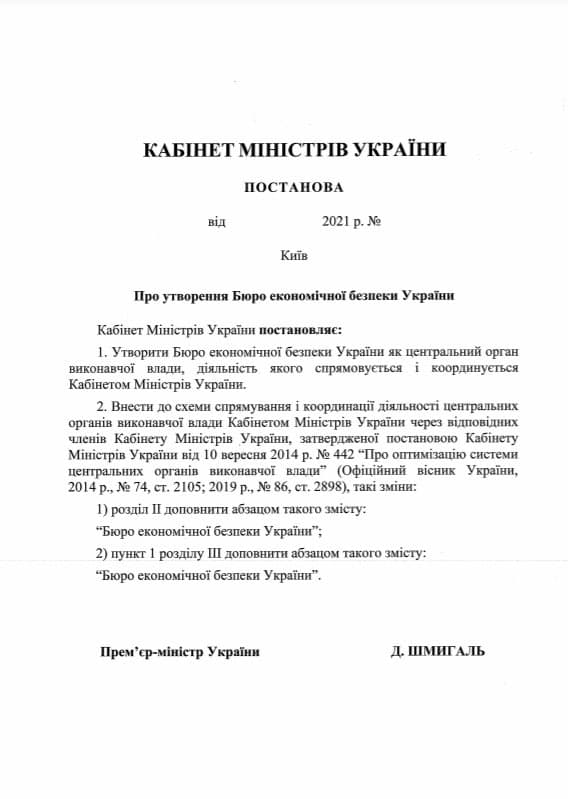 The newly-established Bureau is tasked to deal with ‘offences that infringe on economy of the country’.

According to the law,  the Bureau of Economic Security is authorized to: