Independent MP Geo Leros is facing disorderly conduct charges after he showed the offensive hand  gesture to  the Ukrainian president.

The middle finger flashed at the Ukrainian president in frustration  has prompted official charges.

In a statement issued on Thursday,  state prosecutors said  they formalized charges against  the MP in connection to the incident that took place in the Verkhovna Rada last Thursday.

Geo Leros hurled  ‘insults’ and showed the Ukrainian president an ‘obscene gesture in contempt to moral norms’, said State Bureau of Investigation, arguing it qualifies as  blatant ‘disorderly conduct’ and carries a punishment of ‘up to 6 months in prison’.

The MP who was earlier kicked from the Zelensky’s ‘Servant of the People’ launched a scathing rant Thursday blaming the Ukrainian president for political persecution and pressure.

Cut off by the speaker, the visibly frustrated lawmaker  gave the finger to Zelensky who came to the parliament to introduce his new ministerial appointments.

In his statement on social media, Geo Leros struck a defiant mode stressing that he will  ‘fight for justice’. He also   doubled down on his allegations that Zelensky ‘sold Ukraine oligarchs’ and ‘conspires with the Kremlin behind our backs’. 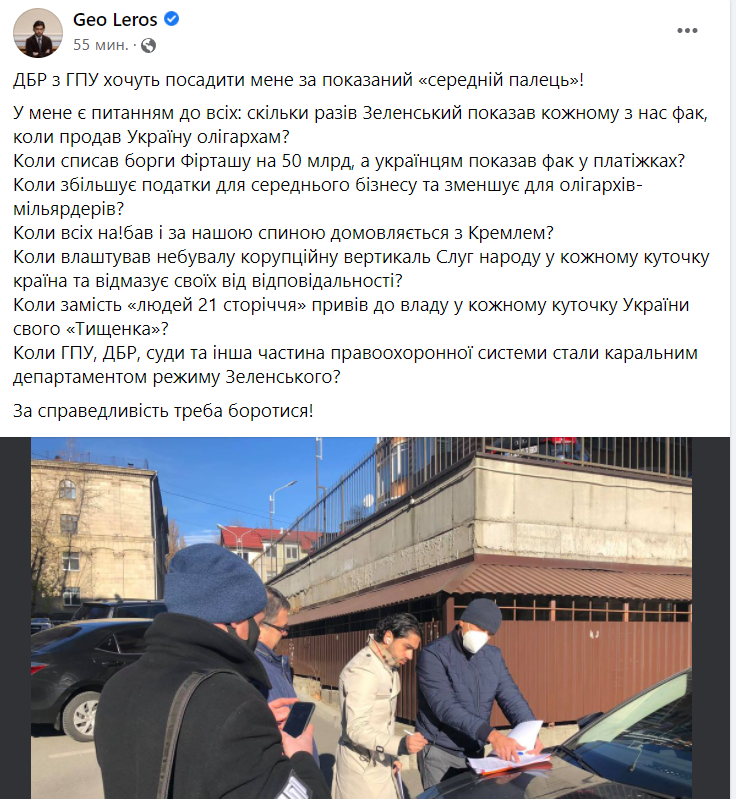