'Thanks to the U.S.', one more platform for talks with Russia may appear, in addition to the so-called Normandy format, said Zelensky.

Speaking with ‘1+1’ TV host Nataliya Moseychyk on Friday,  Volodymyr Zelensky revealed the details of his Thusday phone call with the US president Joe Biden. 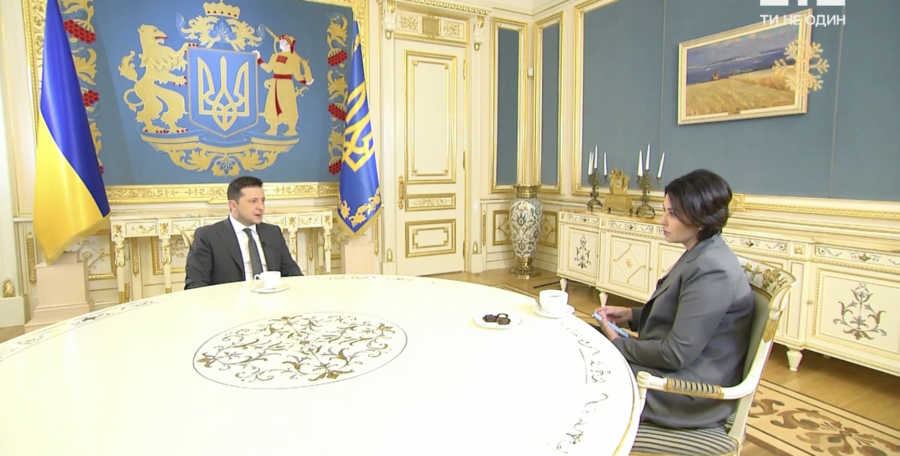 On promises he got from the US president

Moscow is not going to heighten the escalation against Ukraine is what Volodymyr Zelensky was reassured of by Joe Biden who earlier this week held talks with Russia’s president Volodymyr Putin.

With bigger involvement from the US administration, not just ‘moderating the process’, Ukraine can get another ‘platform’ for stalling talks with Russia over Donbas future.

‘No decisions or discussions about Ukraine without Ukraine’ was another promise spelled out by the American president.

On autonomy referendum for Donbas

Zelenksy admitted he ‘doesn’t rule out’ such option  as virtually ‘anything can happen’ in future, yet claimed the phone talk with Biden didn’t bring up the issue of going into talks with Donbas separatists.

On a December ‘coup’ attempt in Ukraine he earlier warned about

Zelensky said, he ‘doesn’t want to talk about it’ arguing that ‘the men’ [behind the conspiracy]  got some ‘signals’ from Ukraine’s ‘strategic partners’, which made them change their initial plans.

What makes him ‘glad’, said the president,  is that Ukrainian society has not supported such ‘destabilizing steps of these groups’ though he is still on the alert as ‘plans of those people haven’t changed globally’.

On relations with Russia

Zelensky once again stated he wants to have direct talks on Donbas conflict with the Russian president.

‘I see the support for this path from both our European partners and the U.S’.

The Ukrainian president bemoaned political disagreements in Ukraine that further lionize and embolden Moscow that ‘does whatever it wants and we let this happen when we, in Ukraine, say ‘we can hardly stand up to Russia’, and keep quarreling’ [with each other here in Kyiv]’.

‘We have different viewpoints [in Ukraine] –‘we should talk [with Russia]’, ‘we shouldn’t talk [with them], ‘look, they can get Kyiv in 2 hours’ time’, said Zelensky, arguing such discord sends a wrong signal to outsiders giving an impression  Ukraine is really  weak – ‘not a fortress’.

‘We are creating this cult. Much like Europeans who are scared’.

On prospects of Ukraine’s NATO membership

Zelensky also admitted there are ‘barriers’ on Ukraine’s way to NATO that are hard to get about, and no matter what  the decision about joining the Alliance is going to be made by the Ukrainian people, and it doesn’t matter what Putin says in this regard.

Despite sporadic  outages or cold radiators  that are ‘exceptions’,  Ukraine faces ‘no deficit’ of energy, said Zelensky.

‘There will be no mass outages, some may happen though’.

‘We will always be warm and doing well, even when it is cold’.