Zelensky’s senior advisor argues 'it is ridiculous' when the Ukrainian president is 'called on the mat' to 'oligarch's television'.

As Wagnergate story is back in the spotlight, Zelensky’s officials rush to explain why the Ukrainian president dodges uncomfortable interviews on unraveling Wagnergate scandal

Earlier this day, ‘Svoboda Slova’ producers invited the Ukrainian president and his senior aide Andriy Yermak to appear on the Friday episode of the TV talk show arguing that state officials ‘must be transparent’ about the stories that are making  headlines in Ukraine.

The invitation for a guest appearance made by ‘Shuster Live’ team on social media got an angry response from the president’s office.

In the statement on Facebook, Mykaylo Podolyak who is allegedly behind its wording, said it is   ‘ridiculous’ to deal with the situation where the Ukrainian president is ‘called on the mat’ to the oligarch-owned TV station.

The senior advisor, who oversees Zelensky’s information policies, refused the invitation blasting ‘Svoboda Slova’ as ‘the oligarch’s propagandists’  that aim to orchestrate another ‘mock trial’ while pretending they are providing ‘objective coverage of the important country’s important issues’. 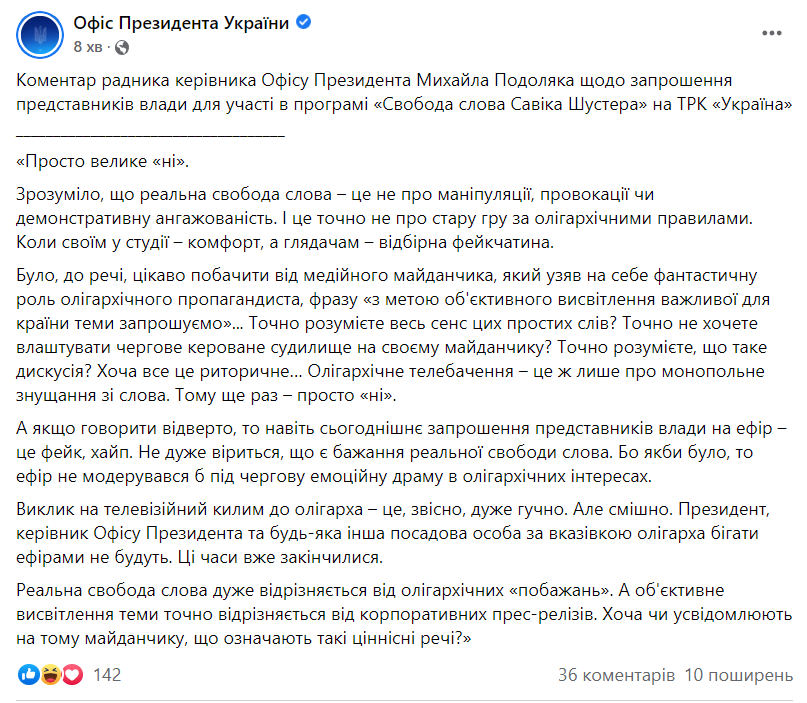