US embassy supports Kyiv in incident with Ukrainian warship

On December 9, Russia’s security agency warned that a Ukrainian warship headed toward a disputed strait between the Black Sea and the Sea of Azov and ignored demands to reverse course.

The FSB, which oversees Russian border control, issued a notice Thursday stating that Ukrainian navy warship ‘Donbas’ was sailing in the waters of the Sea of ​​Azov towards the Kerch Strait, a maritime chokepoint under Russian control since the annexation of the Crimean Peninsula in 2014.

The Embassy of the United States in Kyiv supported Ukraine and stated it is an ongoing campaign of Russia’s false allegations.

‘The ‘Donbas’ has every right to sail in Ukrainian waters. Russia’s false allegations are part of its ongoing campaign to distract from its latest aggressive, provocative action. New, illegal restrictions in the Kerch Strait and Sea of Azov – yet another act of aggression against Ukraine’ the tweet goes. 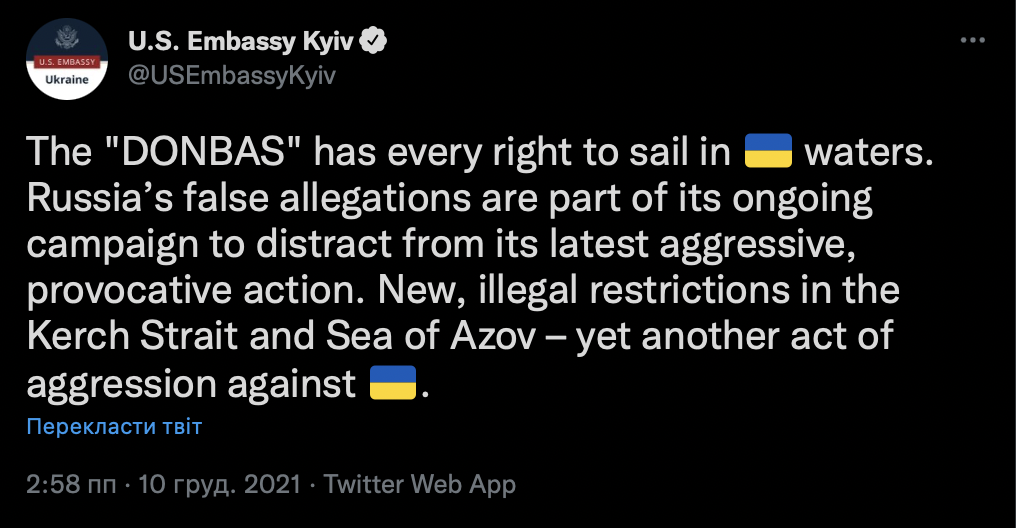 The press service of the Ukrainian Joint Forces also called this information a fake and added ‘The Ukrainian Navy warship ‘Donbas’ did not enter disputable waters. The ship performs tasks in Ukraine’s territorial waters. At this time, the ‘Donbas’ is returning to the base’.