Former Secretary of the Security Council Oleksandr Danyliuk explained why he had hit Tymofii Mylovanov, the adviser to the head of the President’s Office, at a birthday party.

‘In a private talk yesterday, Tymofii admitted that he had followed an instruction from the President’s Office to remove me from the competition for the position of the Bureau of Economic Security director.  Then he offered me to go to judge Vovk at the District Administrative Court of Kyiv. It is that dirty court, which has not yet been liquidated only because Vovk, like Mylovanov, agreed to be a marionette of the President’s Office’, Danyliuk wrote in a statement on Facebook.

He also blasted  the authorities claiming the current  ‘system of power’ is built on ‘puppets’.

‘Marionettes chair competition commissions, courts and state power bodies. The country’s leadership is proud of this. Moreover, they want the director of the Bureau of Economic Security to be a puppet too. I have repeatedly proved that I will not act under anyone’s instructions’, added Danyliuk.

He claims the excuse that led to his removal  from the competition was  ‘idiotic’ – allegedly because of his American diploma. Earlier, the media reported that Mylovanov had come to Danyliuk’s birthday party. According to Mylovanov, Danyliuk invited him. At the party, they stepped aside and then a fight broke out.

After that, Danyliuk told Mylovanov to go away and report to Andrii Yermak, the head of the President’s office, about the reason for this decision.

Mylovanov wrote on his Facebook page that Danyliuk had punched him because ‘he did not like the decision of the commission to remove Danyliuk from the competition’. 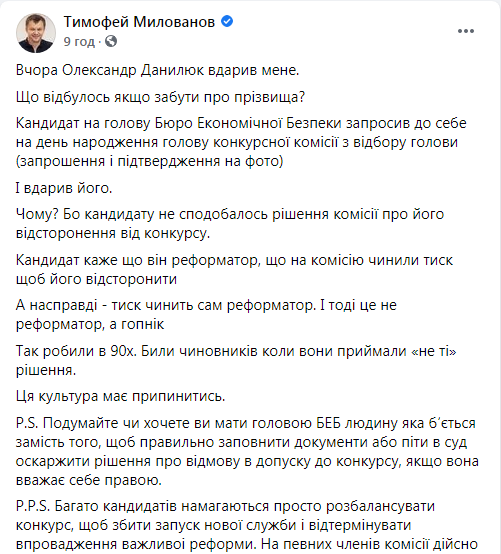 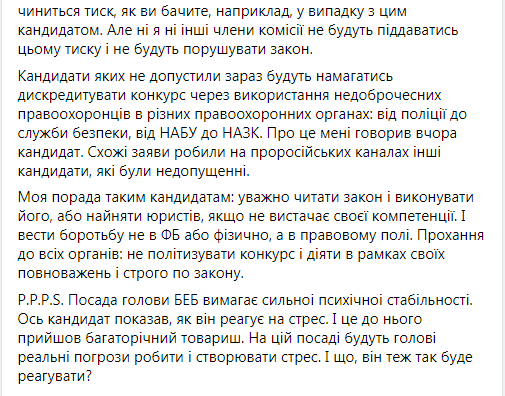 Prior to that, Mylovanov made a number of scandalous statements. In particular, in October 2019, he commented on the words of oligarch Ihor Kolomoiskyi, who had called him a ‘moron’.

‘Well, I am not hiding the fact that I am a moron. I am kidding now’, the then minister said at a briefing.

In addition, in an interview with Bihus.Info, Mylovanov stated that he had left Ukraine for America because he was ‘offended’ by his country.