‘Why the f*ck did they throw us in here, just like some cannon fodder?’, Dutch TV report makes public secret MH17 tapes 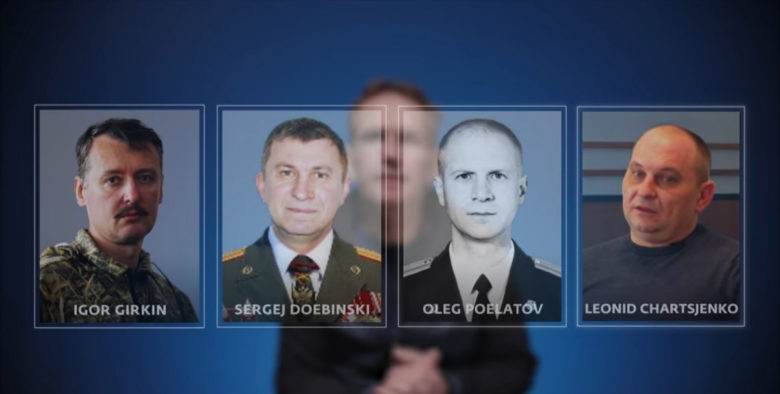 The  revealed tapes are part of the investigation by ‘Nieuwsuur’ TV news program.  The Dutch journalists claim that the recordings are authentic and come from the SBU that  intecepted  thousands  of Sergey  Dubinsky phone calls. Their release provides the Joint Investigation Team (JIT) with new evidence on the suspects’ involvement with the MH17 flight shotdown.

Kharchenko: I have lost 30% of my group

Dubinsky:  F*ck, they got shelled by artillery?

Kharchenko: Yes, it’s circus, Nykolayevich, it’s circus. Why the f*ck did they throw us in here, like cannon fodder in here?

In another conversation Dubinsky is heard speaking with Oleg Poelatov (Pulatov) who allegedly headed the Russian military’s reconnaissance and sabotage group. They were discussing transportation of “Buk’ missile:

Poelatov:  Tanks are not needed, it is long range artillery and air defense that are needed. We had an airplane ‘working’ on us at high altitude; no system could ‘get’ it.

Kharchenko: I will try [to do something], if this night they will bring something, “Buk-M” will be sent to you right away.

Kharchenko: It is nothing doing now; we can count only on “Buk”

The Dutch TV story also featured   Dubinsky’s conversations with “Buryat”.  In the conversation, taped on July 17, Dubinsky is caught claiming that he is in direct touch with Moscow’, and later discussing “Buk” missile deployment to Donbas separatists.

“Buryat”:  What do we do about this ‘beauty’, Nykolayevych?

Kharchenko: Which one? This one?

Krahchenko: Is it the thing I am thinking about? Gentle one?

Kharchenko: It is on this how-do-you-call it, tracked vehicle?

“Buryat”: Yes, but it has to be put up somewhere, to keep it hidden.

Kharchenko: Is there a firing group?

“Buryat”:  Yes, there is a firing group.

Kharchenko: No need to hide it. It will now go there. I’ll tell where to deploy it. It’ll go along with ‘Vostok’ tanks’ unit.

On July 17, about half an hour before MH17 was shotdown, Dubinsky learns from the other separatists that they took down “sushka”, the Ukrainian ‘Sukhoi’ jet fighter.

The following intercepted fragment captures Dubinisky cheering “Good job! Good job!’ when he hears Leonid Kharchenko informing “we are in position. Already took down one ‘sushka.”

The TV report argues that the DNR intelligence senior allegedly came to realize that they had downed an aircraft carrying 300 civilians, only two hours later, when other separatists’ representatives were approached by Russian TV crew asking about the civil flight crash. The released tapes also shed the light on “Buk” missile removal citing yet another recording in which the suspects discuss moving “the box’ to “the other territory”.  The Nieuwsuur’ journalists claim that the conversation was addressing “Buk” missile system used in downing of MH17.