Why ‘Travel Ukraine’-promotional campaign is not about Ukraine

How come that promotional campaign #TravelUkraine is more about promotion of Russian сulture and arts than Ukraine’s tourist destinations? 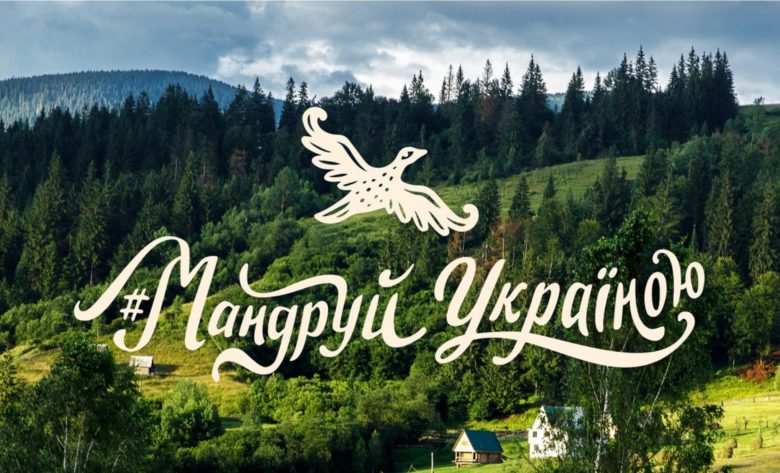 The promotional campaign TravelUkraine came as a partnership project by  Ministry of Culture and Information Policy and State Agency of Tourism Development  that combined  ‘cooperative efforts of the state, businesses, and creative industries’ to boost domestic tourism in Ukraine.

The project was met with immediate backlash from social media users prompting departure of one of it collaborators.

State Tourism Agency broke the news on the project kickoff in a Facebook announcement on June 12 and a week later Ministry of Culture presented it on its Instagram page.

The ministry informed the campaign concept was created by Olga Selyscheva and  got endorsement from Andriy Fedoriv and Daryna Zhodak fund.

Andriy Fedoriv, CEO of Fedoriv Group investment company, who is known for his creative input for a range of Ukrainian brands, soon gave details on his contribution to the project in his Instagram post.  Showing some marketing materials for the TravelUkraine campaign, he complained about the insufficient  state funding  amid the summer tourist season.

first things first,  let us take a look at the financial aspects of TravelUkraine project.

Both State Agency of Tourism Development and Ministry of Culture failed to respond to information requests about state funding for campaign ‘visuals’ and involvement of Andriy Fedoriv company. 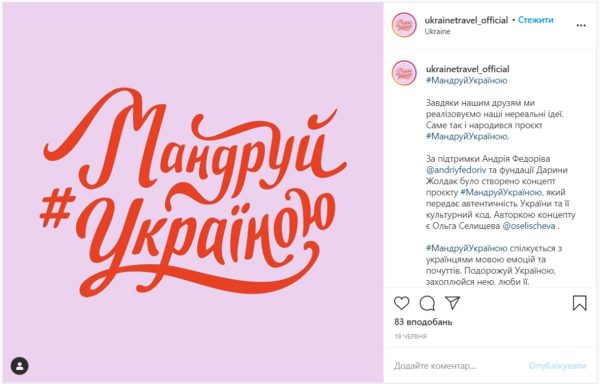 According to Andriy Fedoriv statement on Facebook, the visuals production  received ‘zero’  hryvnas  [of public funds] and war primarily sponsored by Daryna Zholdak fund. He also claimed that at the moment his Fedoriv Agency was not involved in TravelUkraine campaign.

Its imagery came under scrutiny for their obvious references to Russian traditional ornaments.

The artist behind the campaign logo claims it is so.

Kosiv style that evolved in the Ukrainian Carpathians is known for it s white, green and ochre color scheme. Designs and images of Kosiv ceramic include birds, animals, plants, mythical creatures, some artisan motifs and are marked by color saturation that adds dimension. 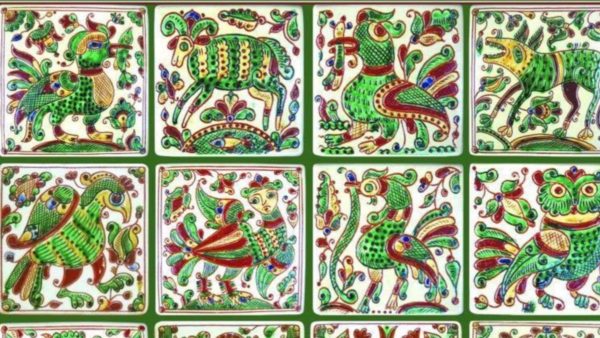 Any resemblance to it? Hardly any.

Let’s take a look at Petrakivka style. This Ukrainian baroque-styled ceramic painting sees dominance of  floral motifs and attention to detail.  It is mostly decorative images of dahlias, asters, tulips, daisies, and cornflowers that come with fern or feather-like leaves. Humans are painted as fantastic creatures. 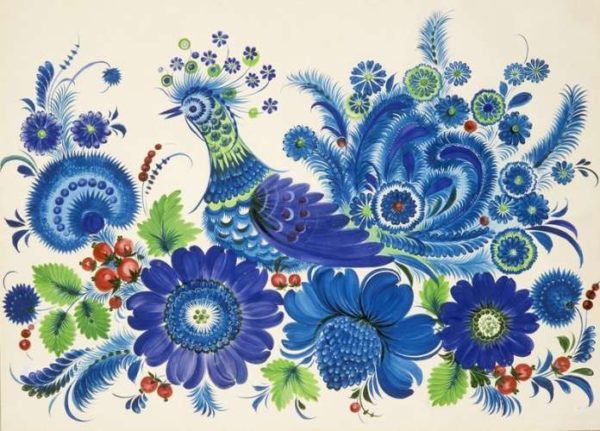 It is marked by combinations of different brushstrokes and traditionally uses a palette of seven basic colors- red, blue, yellow, green, pink, white, orange, and violet.

Any similarities?  Not really.

The third distinct Ukrainian style comes from Oposhia, Poltava region. It is characterized by light yellow coloring against the backdrop of red, brown, white and green with saturated ornaments combining shades of blue, dark brown, loud subtones of green, blue, or black that produces the see-through glazing effect. 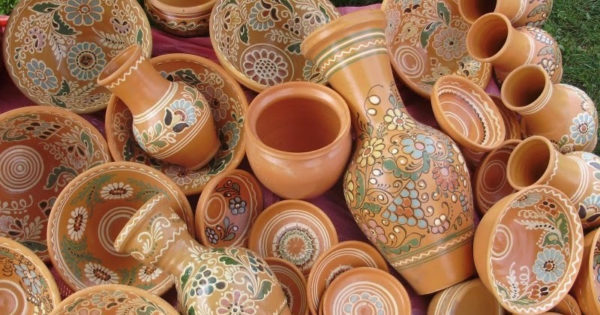 It is not the case here either.

Bubnovka, the last of four Ukrainian styles, is marked by fairy-tale floral ornaments and dominance of yellow, brown, white and blue colors. This style also has little to do with branded content and logo of TravelUkraine campaign.

How do campaign visual content creators respond to the controversy?

Faced with criticism, Andriy Fedoriv now argues that it is ‘not brand identity to last for centuries’.

The artist behind the campaign visuals slammed critical comments of social media users as amateurish and abusive, and, to counter allegations, posted the image of Ukrainian decorative style she was re-imagining. 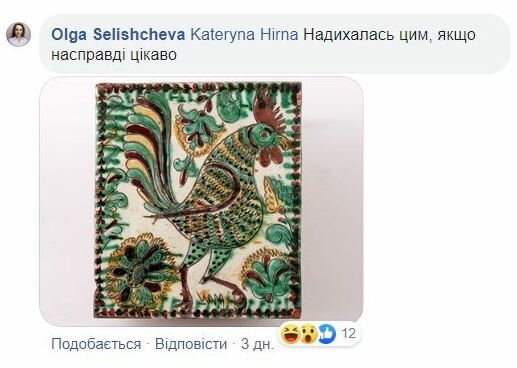 At a closer look, it is plain obvious that coloring, ornaments and motifs are pretty different from Kosiv tradition.  This style mixes floral and animalistic motifs with illustrations of mythic, religious and everyday life themes of the Hutsuls. It is also known for such distinctive feature as paint smears called ‘tear drops’ The geometric ornaments look unassuming but natural. Light brushstrokes highlight plasticity of forms while ornament come out as ever fresh and authentic, which in stark contrast to the scaldalousTravelUkraine logo that features repetitive images producing completely new ornament.  That said, you will have a hard time finding similarities between these two things.

Still, there should be something in common. Social media users provided their own judgment on that. 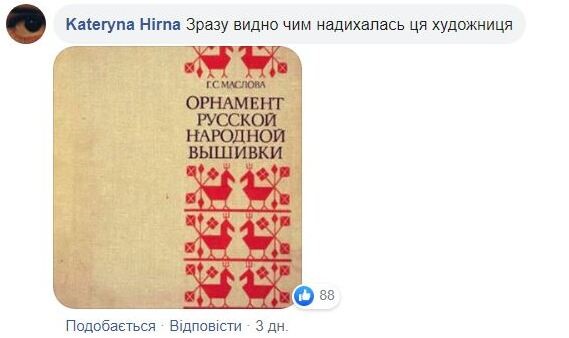 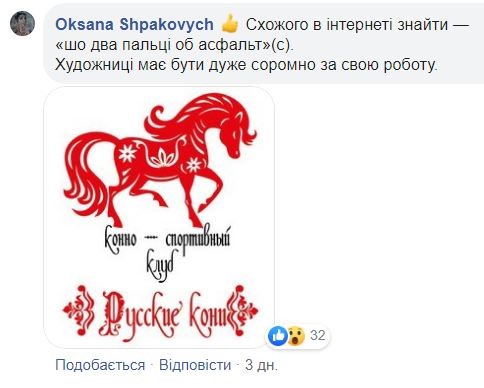 On the surface, there were more things like that. There were Soviet-era cartoons, Russian weathercocks, Russian matershki and khokhloma ornaments.  All of those claim no relation to Ukrainian traditional art and culture.

Here is what we have discovered 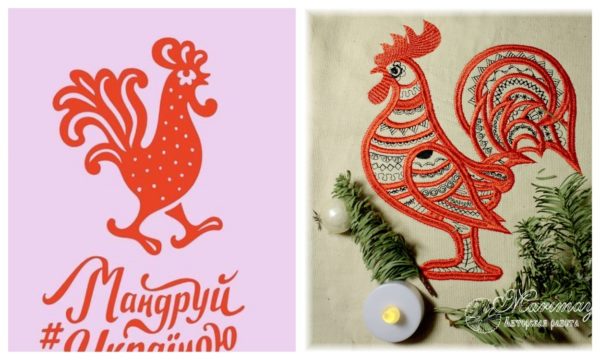 A rooster is obvious reference to Mezensk painting common for the northern regions of Russia. This traditional school of painting is marked by archaic art forms, dominance of red and black colors, and triptych composition.

Now take a look at TravelUkraine images and find the same three scenes.

Colors and images bear resemblance to the rigged landscapes of Archangelsk woody region. 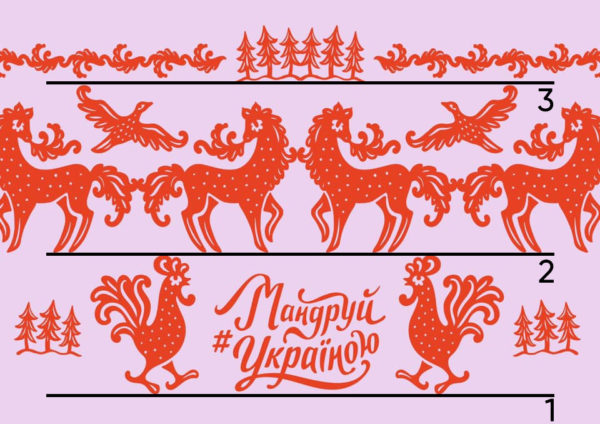 The ethnographic research says that Russian vulgar art often portrays flocks of birds and Mezensk ornaments are no exception. ‘They are seen floating on upper ties [..] images of birds come overlapping with images of horses with disproportionately long and thin legs’.

Mezensk ornaments became a common element of Russian and Soviet-era images and can be found in cartoons, book illustrations,  chocolate wrapping. 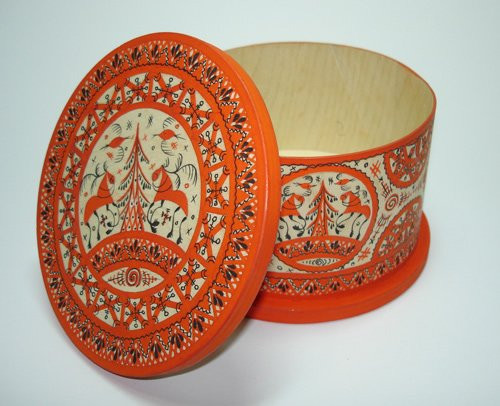 It does look familiar but it is not part of Ukrainian culture. It is more about Aleksandr Pushkin verses and Russian fables.

This raises the question where creators of TravelUkraine visuals draw inspiration?

These days, Ukrainians are embracing domestic art and culture and are sensitive to such things at the time of a war conflict with Russia.  Use of Russia-originated images for the campaign that must be appreciative of Ukrainian culture and arts comes as a very controversial message.