In his Facebook statement, Ruslan Ryaboshapka was critical of Andriy Yermak role in former US administration plot to renew the investigation on Hunter Biden in Ukraine.

The former chief prosecutor said ‘he wonders how the President’s office chief was going to look in the eye’ of Antony Blinken and Victoria Nuland who were set to arrive in Kyiv.

“Andriy Yermak ‘sold’ it to president Zelensky that he was a top US relations expert. All this time, prior to the victory of the new US president, he had supported the Trump administration, had numerous contacts with its officials and convinced president Zelensky of Trump’s future presidential victory’, said Ryaboshapka.

Citing the revealed transcript of Yermak-Giuliani call, he argued that Yermak had promised to organize investigation on Joe Biden’s son.

“Our prosecutors’ team audited all the cases that we ‘inherited’ and the prosecutors found no evidence that could point to  Hunter Biden’s involvement with any wrong-doing”, explained the former chief prosecutor.

Ruslan Ryaboshapka also claimed that he had informed president Zelensky on the issue.

“The transcript of Giuliani-Yermak call suggests that refusal of our prosecutors’ office team to play up to one of the US presidential candidates was among the reasons behind my dismissal as Prosecutor General,’ added Ryaboshapka.

The former official stated that it was evidenced by a hasty probe on Poroshenko-Biden tapes the new chief prosecutor launched in May 2020. He also raised a concern over Zelensky and his officials’ comments on the tapes’ scandal that was plotted by the ‘Russian agent’ Andriy Derkach.

The former chief prosecutor said that ‘role of the President’s Office chief in this combination, with the view to the transcript of Giuliani-Yermak call, must be examined by law-enforcement agencies’. 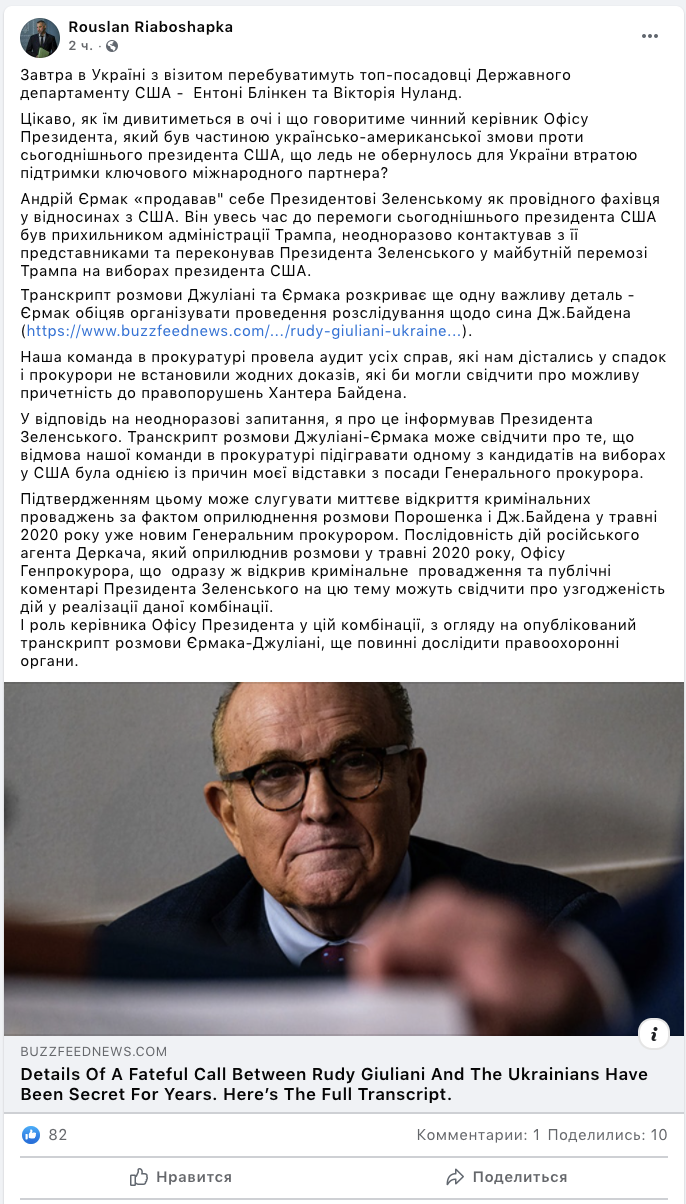