In his Saturday tweet, the former ‘Ukrzaliznytsya’ advisor cited American the surveys by American Chamber in Ukraine and European Business Association that have shown ‘the main problem in Ukrainian business is the utterly corrupt judiciary, followed by other parts of law enforcement’. 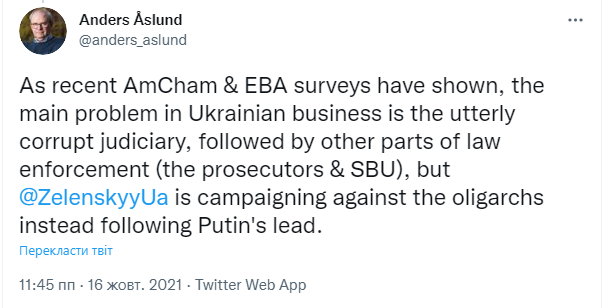 The leading expert believes   Zelensky’s government is having its priorities wrong as  the Ukrainian president is ‘campaigning against the oligarchs instead following Putin’s lead’.

In another Saturday tweet, Aslund cited the recent World Justice Project Rule of Law Index that saw Ukraine lagging behind in the 115th place out of 139 ranked countries, which indicated  that ‘the wors corruption is in Ukraine’s judiciary power, police and military’. 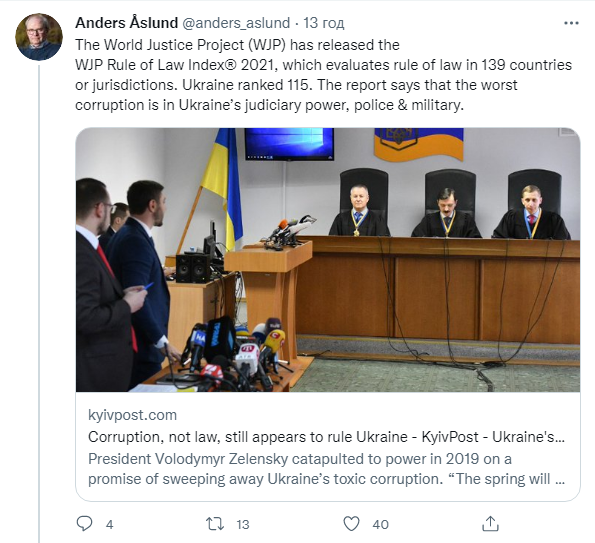 His departure was also marked by a Twitter spat with Zelensky’s press secretary Yuliya Mendel who alleged  his criticisms of Zelensky policies stem from him feeling sore over the lost job.

Aslund hit back claiming Mendel made things up and she ‘just doesn’t know how to do her job properly’.