The approval ratings of president Zelensky and his ‘Servant of the People’ party continues to decline.

In the wake of Pandora Papers revelations and plunging ratings,  Volodymyr Zelensky re-election is not a sure thing anymore, according to the new polling by ‘Razumkov’s Center’.

If the elections were held today,  Zelensky could count on  just 17% of all votes  and 26% of decided votes.

Boyko’s electoral support has dropped almost twofold  – from 13% to 7%,  as ‘Opposition Platoform for Life’ leader is facing rivalry of Yevhen Muraev.

The support level of other candidates has not changed significantly since the beginning of this year. 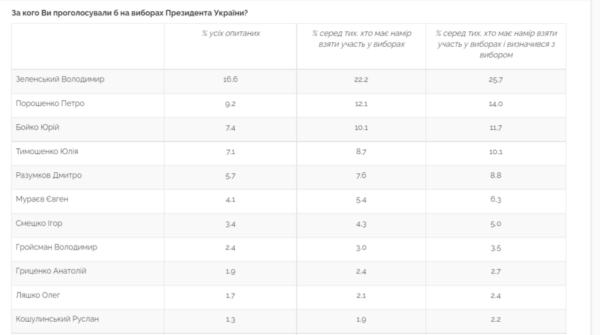 The same dynamics in voters’ preferences is observed in the numbers of support for Ukrainian parties.

If the election to the Verkhovna Rada of Ukraine happened today, the ‘Servant of the People’ party would sill enjoy the greatest, yet far from sweeping, support of voters – 14% of all respondents or 22% of those who would take part in the election.

The support for the ‘OPfL’ party has also dropped – from 14% to 8%,  as ‘Nashi’ party taking a bite out of its electorate’s share. 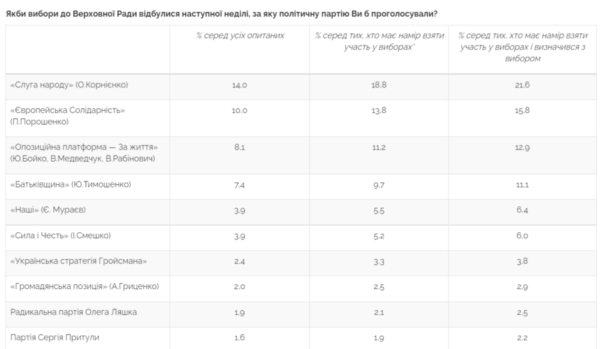 The poll was conducted October 14-20, 2021, surveying 2018 likely voters in all regions of Ukraine, except for Crimea and the occupied territories of Donetsk and Luhansk regions. The sampling error does not exceed 2.3%.