‘Bukvy’ fact-checks the quote by Oleskiy Arestovych, spokesman for Ukrainian TCG delegation and Zelensky advisor, claiming that Ukrainian officials failed to provide for  ‘any investigative actions’ while exchanging Russian war prisoners before 2016.

In his interview for  ‘Pravo na Vladu’ TV talk show, Ukrainian delegation spokesman at Minsk Trilateral Contact Group Oleskiy Arestovych said that there was no proper investigation on Russia-controlled militants detained by Ukraine.

‘Bukvy’ fact-checked the claim by Arestovych and here is what is wrong with it.

Starkov’s pardon was, in fact, part of the prisoners’ swap that helped to free Andriy Grechanov from Russian jail.

Prior to the echange, Ukrainian officials followed all the investigative actions in the case of the Russian officer’s – from his arrest being properly catalogued to his crimes being fully investigated, brought to court and filed in State Register of Court Decisions. 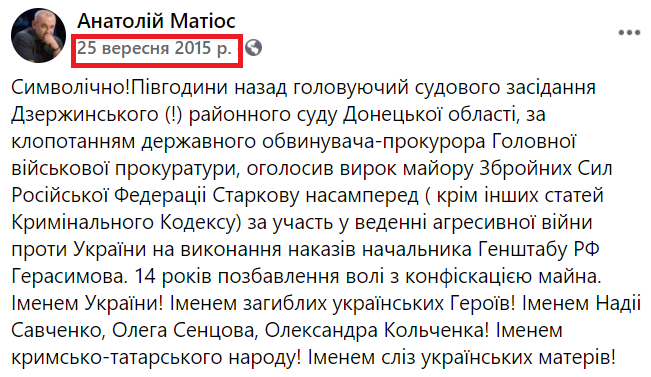 The events took place in 2015, which casts doubt over the claims by Arestovych. Another thing Zelensky’s official fails to notice for the obscure reason  is that any prisoners exchange would have been hardly possibly without listing all basic data on detainees.

The false assumptions by Arestovych appear to  follow the narrative of  Bigus.Info media report that featured taped calls between Viktor Medvedchuk and Russia-controlled separatist leaders, which alleged Volodymyr Starkov’s release  was put off to help Petro Poroshenko have a better publicity effect.

Andriy Grechanov who was part of that prisoner swap expressed his doubt over  Bigus.info misinterpretation and says he would be still in jail if Poroshenko hadn’t granted pardon to the Russian military officer.