And why it will create problems for both customers and TV channels ...

More and more people learn about the state of affairs on television from the Internet, in particular, from the news about  scandals, such as a Ukrainian-Russian commercial with Oleh Vynnyk, broadcast on ‘Inter’. Classic television is gradually losing the battle for audience attention, but TV advertising is still a relevant way to promote brands. As it turned out, the TV advert market is full of scandalous stories.

Until recently, the Ukrainian ad market was divided between two groups of media companies.The first included the ‘Inter Media Group’, ‘Media Group Ukraine’ and ‘StarLightMedia’, and ‘1+1 Media’ alone made the second group. There are also small channels, but they cover a small market share and do not radically change the situation.As the former state commissioner of the Antimonopoly Committee of Ukraine Agia Zagrebelska explained in a comment to ‘Bukvy’, the situation ‘Alliance’ (StarLightMedia, InterMediaGroup and Media Group Ukraine) vs. ‘1+1 Media’ existed since 2012, andthey worked as competitors. According to various open data, the Alliance’s share in the TV ad market was estimated at more than 70%, and ‘1+1 Media’ – at more than 15%.In 2021 (and in fact – at the end of 2020) the situation changed. Two big teams remained, but their composition changed.Now ‘StarLightMedia’ and ‘1+1 Media’ have merged, while ‘Media Group Ukraine’ and ‘Inter Media Group’ remain with a minority market share.

In a comment to ‘Bukvy’, Mykola Tipusyak, ‘Espresso TV’ marketing director, said that four large television groups have long used non-market tools to prevent advertisers from buying advertising or sponsorship on non-sales house channels. Changes only lead to a redistribution of advertising budgets within four television groups. Obviously, this worsens the conditions for advertisers, but this system is not new.

Why is this important? It is usually possible to place an advert either with the first ‘team’ or with the second, such an unspoken rule has existed on the market for a long time. In practice, this rule works like this: the customer receives significant bonuses or discounts for advertising exclusively on the channels of one of the ‘teams’. If at least one ad comes out of a competitor – the customer loses all bonuses and discounts. Due to the high ratings of the Alliance’s channels, most customers chose this association.

With the reformatting of the ‘teams’, the situation remained unchanged – as before, advertising can be purchased via ‘StarLightMedia’ and ‘1+1 Media’ or ‘Media Group Ukraine’ and ‘Inter Media Group’.

The current division of the TV advert market is illustrated by one of the largest companies on the market – ‘Ocean Media’, which, according to Agia Zagrebelska, acts as a ‘StarLightMedia’ sales house (on the part of ‘1+1 Media’ this role is performed by Sirius Media LLC). On its website, ‘Ocean Media’ states that it works with leaders in the field of television – ‘StarLightMedia’ (which controls 38% of the market) and ‘1+1 media’ (which has 30% of the market). However, they work together and account for more than two-thirds of the TV ad market in Ukraine. This is the first alarming news – both for brands and for TV channels. 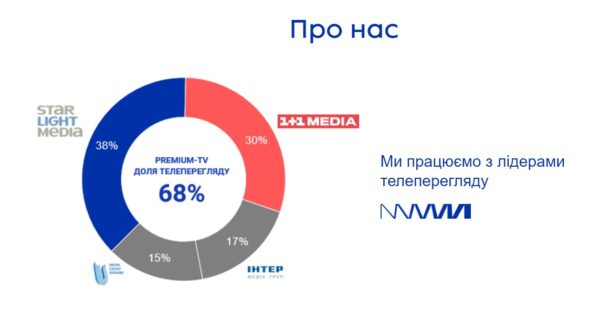 For brands – because they have to choose between agreeing to the terms of the leading group, or be content with less coverage. Commenting on the redistribution of the market, Agia Zagrebelska notes that the sales house ‘Evident Media’ (works with ‘Media Group Ukraine’ and ‘Inter Media Group’ – ed.) will offer discounts for exclusive placement, for shifting budgets at the beginning of the year, and will refuse markups for non-exclusive and ‘brand association’. Moreover, the sales house states readiness for broad agreements of its customers, i.e. they will be able to buy advertising and sponsorship in all sales houses, and ‘Media Group Ukraine’ will not charge them extra. Obviously, such explicit concessions to customers of ‘MGU” and ‘IMG’ will try to compensate for them twice the difference in audience coverage and other advantages of the competitor, which, according to Zagrebelskaya, include better opportunities to build coverage, younger audience profile, concentration of large-scale shows for integrated sponsorship.

The alarming news for TV channels is that the Law ‘On Protection of Economic Competition’ provides that a market participant whose share exceeds 35% has a monopoly position in the market. If the market participant’s share is less than 35%, but it does not experience significant competition, in particular due to the relatively small size of market shares owned by competitors – such a participant is also considered a monopolist. And most importantly, each of the two or more entities has a monopoly position in the market, if there is no competition between certain types of goods or there is little competition. Alternatively, if the combined share of no more than the three entities with the largest market share is more than 50%.

That is, if the ‘Ocean Media’ website does not deceive its visitors, then it turns out that the two media groups own 68% of the TV advertising market. This may be a reason for the Antimonopoly Committee to be interested in the activities of the largest media groups in Ukraine. ‘Ocean Media’ itself states that in 2021 it will control 71-85% of advertising units. According to Mykola Typusyak, the current situation is similar to a cartel conspiracy and has long needed the attention of the Antimonopoly Committee. Moreover, almost sole control over the advertising time by ‘Ocean Media Plus’ will increase the price of television advertising and sponsorship. At the same time, advertisers who could reduce the cost of placement by using TV channels that are not included in the basket of sales houses will not have this opportunity due to the special penalties.

Given the current situation in the TV advertising market, ‘Ocean Media’ should be described in more detail, as they try to give the impression that the company exists ‘by itself’, although this is not the case. An attentive reader may have noticed that the word ‘plus’ is sometimes lost in the name ‘Ocean Media’. Well, not only in this article, but also on the company’s website.

‘Ocean Media’ LLC was registered almost three years ago, in early August 2018. Until 2021, it was headed by Andriy Partyka, long-time CEO of ‘StarLightMedia’, who formally broke with the media group in mid-October 2018, a few months after ‘Ocean Media’ appeared. The false ‘divorce’ of Partyka and ‘StarLightMedia’ is evidenced at least by the fact that only one of the company’s partners is listed on the website of ‘StarLightMedia’. However, they forgot to set up redirection, and the link leads to the old ‘Ocean Media’ site, which does not work.

‘StarLightMedia’ also cites data from ‘Ocean Media’, describing itself, which looks rather strange for the media industry giant.

However, the story of the relationship between ‘Ocean Media’ and ‘StarLightMedia’ is not limited to this. In June 2020, another company, ‘Ocean Media Plus’ LLC, was registered, to which Partyka formally had no relation. However, this is not quite true.

First, it is not possible to find the Ocean Media’ site through Google. There is only ‘Ocean Media Plus’ and, depending on the language, it links to the sites of companies with the same name from the US and Great Britain, or links to services of access to the register of legal entities, such as Youcontrol with the page of ‘Ocean Media’ LLC. Is it possible that the site of one of the leaders of the TV ad market is not in Google search? It sounds absurd. 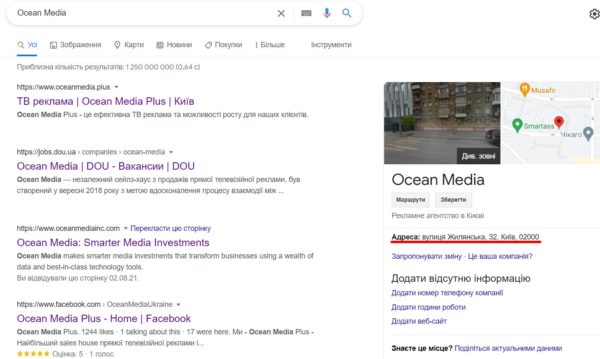 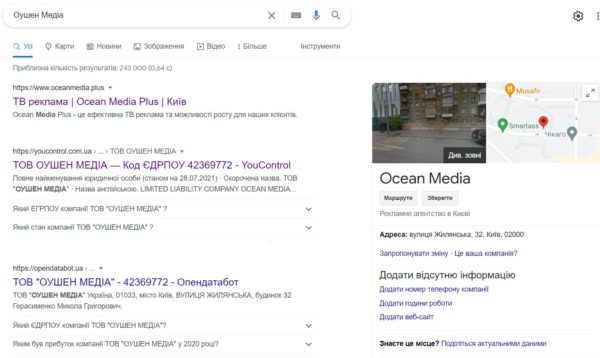 Second, both ‘Ocean Media’ LLC and ‘Ocean Media Plus’ LLC provide the same contact information – office address, mobile number and e-mail, which can be verified by following the links above. The same address, 32 Zhylyanska Street, in Kyiv, is also listed on the ‘Ocean Media Plus’ website. Of course, one can rent offices in one business center. The ‘lease’ of one mobile number and e-mail could be called a novelty of Mr. Partyka, if it were not for the thousands of other people who want to formally separate the interconnected structures.

Third, on third-party resources, such as the DOU website for IT professionals, the ‘Ocean Media’ employer’s page contains a link to the ‘Ocean Media Plus’ website. The proof is here. Unlike the ‘StarLightMedia’ website, DOU did not forget to set up redirection. Even Partyka himself is in the photo among the employees of the company, with which he, formally, has nothing to do. The company, which was founded only a year ago, but immediately became a partner of the market leader – ‘Star Light Media’, which is another reason for the Antimonopoly Committee to be interested in their activities. By the way, the formal CEO of ‘Ocean Media Plus’ Serhii Smelyansky stands behind Andriy Partyka – a rather specific way of placement given the corporate hierarchy, isn’t it?

It is easy to get confused in all these ‘oceans’, which leads to interesting cases, such as the publication banning the advertising of medicines on television. The statement of ‘Ocean Media Plus’ is accompanied by a photo of Partyka, as noted below – ‘CEO of Ocean Media’ (‘Ocean Media Plus’ website states that its director is Serhii Smelyansky, not Andriy Partyka). 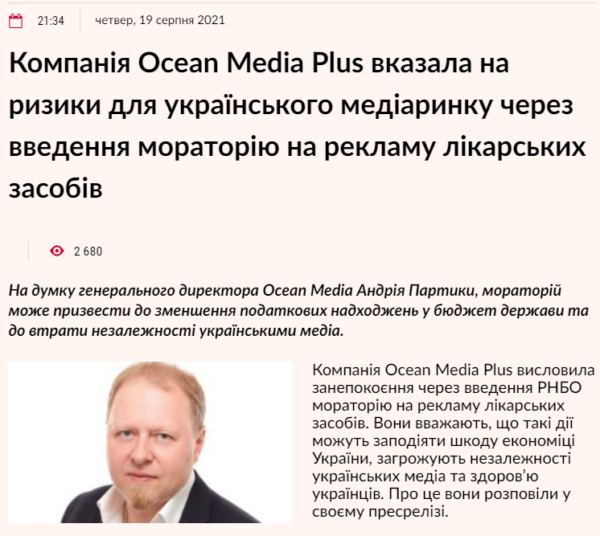 As a result, the company, which seems to have nothing to do with Andriy Partyka, the longtime head of advertising for ‘StarLightMedia’, or with the media group itself, and which was created a little more than a year ago, claims control over most of the TV market advertising time. The success story is so incredible that one can only guess whom Partyka wanted to confuse with such ‘disguise’. The two formally unrelated companies have more in common than the identical twins. If there was a plan to deceive the Antimonopoly Committee, they saw much more ingenious contenders for monopolies.

‘Bukvy’ addressed Andriy Partyka to comment on the situation on the TV advertising market, but he ignored the request.