After your money. How ‘Servant of the People’ policies are impacting finances of ordinary Ukrainians

Few Ukrainians fail to take heed of law-makers legislative initiatives. Here is the story of three new laws set to pick the pocket of an ordinary Ukrainians 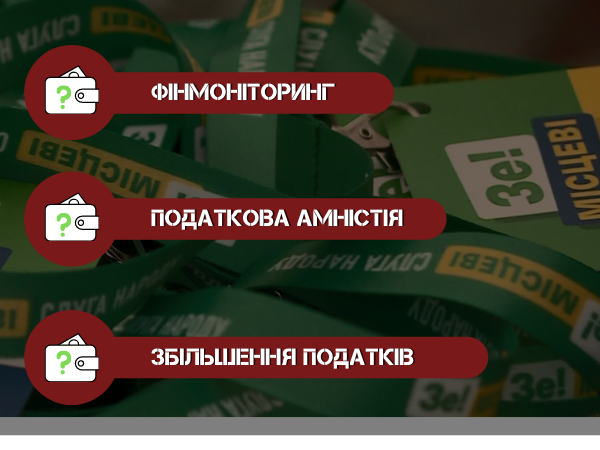 It hardly makes any sense go deep into the new legislative initiatives which reek of incompetence and violate law-making standards, and make you doubt sanity of their creators. ‘Bukvy’ single out the norms that are set to impact  Ukrainians.

You will be required to verify your ID for bank and ATM transactions meaning that you will have to wait in a line or have accounts open in most of big banks to save on bank charges and fees. The law fails to address  authorization of transactions made with  non-banking ATMs.

Transactions over 400 thosand hryvnas will now require government reporting, says the president of Association of Ukrainian Banks, adding that bankers will still keep track of transactions under the newly set limit on a look-out for ‘atypical’ behavior of clients.

National Bank of Ukraine (NBU) reassures that they are not ‘bothered’ with on-and-off transactions up to 10-20 thousand hryvnas, explaining  a bank can raise a red flag  when after several small transactions you can be transferred a large sum of up to several thousand hryvnas.

The Association of Ukrainian Banks claim bankers can still be on the alert over transactions of even smaller sums – for up to 50 thousand hryvnas. With no clear criteria of financial monitoring in place, the policies of banks will be biased and have some unpleasant consequences for customers.

Another concern is that banks now are authorized to freeze your transactions they deem suspicious and demand proof of legal grounds for money transfer while the regulation yet again fails to define criteria for such policy.

According to the new policy, you will have to pay personal income tax of 18% on income you get from selling personal belongings meaning that you can be hold accountable for tax evasion when you fail to pay 180 hryvnas of tax on a grandad’s cabinet you sold on the online marketplace for 1,000 hryvnas.

Want to re-sell a pair of sneakers that pinch? Be ready to share the money you got for them with the state control agency. Besides, today such trade can be regarded as unlicensed with more fines slapped on you.

Banking experts advice? If you ‘regularly’ resell things online, you’d better  get a license for your business, to spare yourself of tax-related issues. They though fail to explain the idea of ‘regular’ sales. Next time you will try to trade off used furniture, a baby stroller or kid’s clothes, think twice for you can, unawares, violate the law, which lacks any clear criteria for such offences.

This law update can be applicable in relation to assets frozen on charges of ‘terrorism sponsorship’. Today this procedure is used by State Security and Defense Council (SSDC) for sanctioning and blacklisting orders. On approval from Ukraine’s president who fully controls SSDC banks must freeze the assets of a sanctioned individual and are not required to give  the latter prior notice. Such mechanism makes it possible for the Ukrainian president to exercise unrestricted conrtol over finances of any Ukrainian citizen. Who said ‘democracy is in short supply’ over here?

Among other things, the president and his ruling party devised another ‘surprise’ scheme for Ukrainians. It is a draft law on so-called ‘voluntary tax amnesty’.

With the proposed ‘amnesty’ people face little choice going for lesser of two evils- it assumes that individuals are guilty and can’t be proven innocent about their acquired assets. Many Ukrainians would have a hard time now presenting proof their wages or business income they had in early 2000s did not come in unaccounted cash and were properly taxed.

The law provides for certain ‘guarantees’ from the state: such declarants will be exempt from liability for violations of tax and currency laws, as well as the information from their special declarations will not be used in investigations and/or inspections, etc.

All this looks much like an outright manipulation as the most common tax the ‘amnesty’ is set to target is going to be a personal income tax, which is calculated and covered by employers meaning the latter are liable for all tax code violations in respect to personal income tax payment procedures. The law proposed by the Ukrainian president shifts responsibility to ordinary Ukrainians with their ordinary wages.

To tackle the issue of under-the-table untaxed wages the legislation now makes employees shoulder responsibility for things they were previously not required to do, which in reality violates the constitutional principle of irrevocability. This is where the state is actually scheming – while paying a fee of 5% for his or her untaxed assets a tax amnesty applicant is getting virtually nothing.

Another trick the state uses is  promise of amnesty for assets acquired for untaxed funds before January 2021. The president’s legislative initiative proposes liability exemption for such cases whereas Ukraine’s Tax Code rules the very same exemption (art.102-2) if a control agency fails to charge monetary liabilities within 3 years’ term (1095 days).

In other words, individuals are made exempt from liability for tax evasion while under the other law they can not be subject to it whatsoever. Yet the state deceives you here yet another time because it doesn’t make you exempt from paying this tax. We have a situation where an individual bearing no tax obligations ends up paying 5% fee for his or her declared assets.

It would be next to impossible to prove assets in question were acquired for earnings, which are subject to provisions of article 102-2 of Ukraine’s Tax Code. There can be even more complicated situations when a person uses untaxed funds for purchase of some assets, trades those, this time paying all due taxes, then gets some new assets on ‘clean’ money. Such cases would be harder to crack – tax agencies would need more employers to be able to go after anyone and detect whatever they may deem necessary. And this could be part of the government’s scheme.

These examples give us a clear idea of how delusive is the scheme where Ukrainians are offered virtually nothing in return for giving access to their assets information and  paying 5% share of those.

The law also stipulates a tax amnesty applicant should take his or her money to  a bank listed as a primary financial monitoring entity while such banks are now authorized to run a Source of Funds check meaning your money can be blocked anytime. It is a very dubious benefit for people seeking tax amnesty.

The president’s legislative initiative fails to clarify why a bank should run such check, what instruments and authorization it can claim for doing so, except for obvious threat behind it  to freeze your money  unless you prove a source of funds.

Since the president’s legislation makes savings in cash exempt from tax amnesty declaration, it remains unclear what kind of ‘amnesty’ can come out of it given presumption of guilt this law applies to individuals while questioning sources of all their assets. To put it other way, the president basically tell you – ‘prove that your assets are gained in a legitimate way, otherwise you are in for trouble’.

Another manipulation comes with the tax amnesty promise that information reported by applicants in the Special Declaration would be treated as confidential and may not be relied upon in the course of audits or used as evidence in criminal proceedings with respect to the reported income/assets. In reality, this promise is set to be applicable exclusively in connection to offences subject to provisions of article 212, 212-1 of Ukraine’s Criminal Code. It means that investigators can open a probe citing any other article of Criminal Code, and this time with full access to special declarations, disregarding the formal ‘guarantees’ the president’s law offers. Yet again, the state promises nothing but a delusive scheme.

The law ‘guarantees’ have their deadline – January 1, 2021. At the time, the president’s law was not even introduced in the Verkhovna Rada. This ‘deadline’ loophole will allow law enforcement agencies bypass the policy ‘guarantees’ in relation to assets or property created or acquired after January 1, 2021 meaning tax amnesty declarants are giving carte blanche to tax and law enforcement agencies by exposing their property and assets to any investigative actions. For some unknown reason, law-makers failed to set the deadline for dates such declarations are submitted, which would be ensure such issue would not arise.

The law no.5600 is also steeped in controversy. Initially set to ‘level up budget revenues’ –  the policy is a ‘good old’ byword for raising taxes.

It will introduce a ban on international travel for executives of companies struggling with tax debts, removes VAT deductions for deals on secondary housing market, and raises excise duties. Finance minister Serhiy Marchenko argued that axing tax benefits on housing deals would not impact ordinary Ukrainians because they ‘do not pay VAT’.

There is no doubt the minister is a big housing expert, though a closer look at new policy proves him wrong. VAT is an end-customer tax. A property developer pays this tax selling a new apartment to a property agent. So does the latter while selling it to you on the secondary housing market. Both of them make VAT part of the deal and the law can not forbid such practice – and in both cases the tax is reimbursed by end customers. Given this scenario, the new policy will hardly help to fight  schemes of those, who, according to the minister, ‘have profiteered reselling  apartments failing to pay due taxes’. In other words, customers again will be charged more, including additional fee for VAT payment services.