Has the prodigal son of Ukrainian justice returned? The video of 'recovered' Mykola Chaus on his 'Telegram' channel has had a ripple effect on the Ukrainian mediascape and comes as a great relief to his family and lawyers who got news from him since April 3. 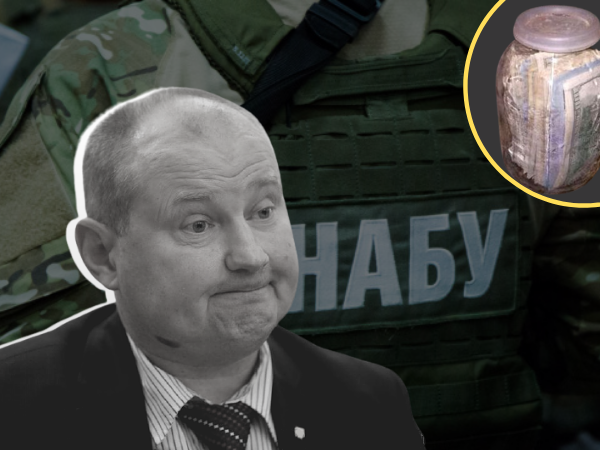 Strange reappearance of Mykola Chaus and his 2-minute video claiming ‘to answer all the questions’ come a clear sign that some forces want to plant  a narrative that hardly has anything to do with own intents of the fugitive judge. The doctored video metadata revealed it was coming from the folder called “Goose” which exposes the intentions of real actors behind this show.

Looking back at his story will help to better understand what made the average Kyiv court judge such a notorious media personality in Ukraine and Moldova.

Mykola Chaus was arrested by NABU investigators after taking a $150,000 bribe and stashing money in a glass jar in his backyard. The judge opted not to wait for a court ruling and fled the country. The  investigation found that fleeing Ukraine Chaus got assistance from his lawyer  Andriy Smirnov, and it was confirmed by  ruling no. 991/1532/20 of High Anticorruption court. Andriy Smirnov is currently a top official of Zelensky’s administration.

Andriy Smirnov’s involvement in Chaus escape was back into the spotlight.  In the leaked tapes of Roman Truba,   Smirnov is heard instructing the chief of State Investigation Bureau to ‘f*ck him (Chaus) right now’, which meant abuse  and grillings of the judge family and his new lawyer to “lure’ the fugitive  back to Ukraine.

In Truba recordings Smirnov is also heard claiming he was still in touch with Chaus with the latter obviously being not excited about that fact.

Mykola Chaus had no intent of going back and applied for political asylum in Moldova. Denied this status, he later filed an appeal to this ruling. With the decision on his appeal still pending – it was due somewhere around April 22-28,2021,  he could freely stay in Moldova. Yet, he failed to know the verdict.

On April 3, Iulian Balan, Mykola Chaus lawyer in Moldova,  made a video about his client disappearance, and later reported the accident to  the local police  claiming that such acts put to doubt Moldova’s powers to protect basic human rights.

Two days later, Moldova’s Interior Ministry held a press briefing and  reported  the details of Chaus kidnapping. The investigators detained one person in connection to the crime and traced the cars of the alleged abductors. They also obtained text messages of the latter.

According to Moldova’s police data, the judge was allegedly kidnapped by a group of men heard speaking in Ukrainian and Russian, who later were seen driving to the Ukrainian border and crossing it.

According to Moldova media accounts, the judge was allegedly taken out of the country in the back of a Ukrainian diplomats’ car. Soon the photos of kidnapped Mykola Chaus emerged. In the photos, his face was visibly bruised.

On April 8, joint investigation of Moldova and Ukraine’s journalists revealed the evidence showing that the judge was kidnapped by Ukrainian nationals with the ties to Ukraine’s intelligence service. The journalists obtained the abductors’ photos and copies of their documents. The investigation claimed that Chaus kidnapping could be used for a smear campaign against Ukraine’s senior intelligence official Vasyl Burba who was at the time  facing scrutiny over his role in the failed Wagner mercenaries capture scheme.  Dmytro Kuleba, Ukraine’s Foreign Minister, denied involvement of official Kyiv in the kidnapping story. Overall, Ukrainian officials chose not to comment the scandal.

On April 9, Moldova’s parliament launched a probe in Chaus case –  a special commission was established to investigate possible involvement of Ukraine’s state officials in the judge kidnapping.

Moldova’ politicians pointed to the Ukrainian government involvement in Chaus abduction on claims that  it was used to hamper ‘Bellingcat’ investigation on infamous  Wagner mercenaries capture scheme.

‘Servant of the People’ MPs were, at the time, seen awkwardly dodging Chaus-related questions on TV talk shows.

Moldova’ president reportedly tried to call up Zelensky following the accident but her calls were never returned. Official Chisinau also demanded removal of diplomatic immunity for Ukraine’s military attaché who was reportedly involved in the illegal transportation of Chaus to Ukraine.

On April 22, Moldova and Ukraine’s media produced new evidence of Ukrainian intelligence operatives’ role in Chaus abduction. The journalists revealed the identities of Ukrainians who kidnapped the judge. They also obtained the tracking history of the rental cars they abductors used, which allowed to  reconstructed their movements in Chisinau prior to the kidnapping.

Media reports were providing  new mounting evidence of Ukrainian diplomats role. The military attaché of Ukrainian Embassy was reportedly seen driving the car that took Chaus over the border. Ukrainian officials disregarded the claims and refused to have the car searched.

The Moldova’s parliament came up with its own investigation confirming most of the media findings.

The story soon saw new developments in Ukraine. According to Ukrainian media accounts, Mykola Chaus was supposedly kept at the military facility in Khotyanivka, Kyiv region, and was set to be relocated to either Moldova or Crimea’s border to make the official narrative of his return to Ukraine more credible.

The Ukrainian officials have kept mum about Mykola Chaus and his whereabouts. The chief prosecutor Iryna Venediktova said she knew nothing about where he could be now, while Ukrainian diplomats in Chisinau kept ignoring meetings of Moldova’s parliamentary investigation commission.  Zelensky’s officials were said to be trying, this time unofficially, to reach out to Maia Sandu officals, snubbing  Moldova parliamentary investigation.

The pressure was mounting amid Moldova’s reports of another arrest in relation to Chaus kidnapping and allegations that Ukrainian state prosecutors were sabotaging the investigation.

Mykola Chaus ‘reemerged’ with his ‘Telegram’ video to claim that he was, in reality,  abducted in 2016, and not  in 2021. In his video, the judge states that he remains in a ‘safe place’, says ‘hello’ to his wife, promising  her, on return to Ukraine, to punish those who were to blame for ‘their woes’. And this is where things get ‘curiouser and curiouser’.  Assessment of the video metadata shows that it had, at least, two editions, and obviously, the other parts of it were held back.

This leaves you wondering what, in the first place, made  Chaus, who claims he is in a safe place,  use a ‘Telegram’ video to reach out to his wife while she is neither  on a ‘searched’ list, nor is facing any allegations. Could it be some sort of ‘notice’ or coded message where the judge is used to let his wife Svitlana know of something?

Secondly, the judge notably fails to address or mention his mother who has obviously been worried for him as much as his wife. You would not normally drop your mother off such list.

Thirdly, the video bears a watermark and is allegedly edited with the professional-level editing tools, which looks rather bemusing. Why would you need to use some sophisticated software when a selfie or two would be enough to garner the attention of media in both Ukraine and Moldova. Even a call for a press-conference in a video format would be clearly sufficient for such motivation.

The mention of a ‘video address’ is probably designed here to send some definite messages that make it impossible for Chaus to digress from video prompting he could be getting. The scenario of Chaus ‘recovery’ shows that the former judge is still a pawn it the game that sees him taken advantage of by others.

The next concern is about his claims that he was ‘forced’ to stay in Moldova and ‘thanks’ to ‘friends’ who came to  spare him of ‘prison and death’. It is a rather contradictory statement that borders on absurdity.  Here is a man who has lived in Moldova for 4 years, moving around Chisinau with no restrictions, renting a home and hiring lawyers.  It does not agree with the idea of ‘prison’.

The 2019 footage  captured Mykola Chaus talking over the phone in the streets of Chisinau and he looked far from what you can call ‘stressed out’ or ‘abused’. Besides, he had a bodyguard to his side who was also kidnapped with Chaus and soon released. What is more, Chaus lived in Moldova with his son, which also contradicts the claim of ‘forced imprisonment’.

How did Mykola Chaus wife and his lawyer respond to his video address?  Both of them put in question its credibility. Svitlana Chaus, who got state protection in Moldova, says that the manner of her husband speech is different from his usual one, pointing out that he had never called her by full name ‘Svitlana’. She believes that her husband was pressed into making this video and his life is still imperiled.

Finally, where could Mykola Chaus be coming back to? As a professional law expert, he must understand that, on his return, he will face the standing 2016 bribe charges that can take him back to jail, and this time for real.

Most obviously, his claims to ‘come back and give all the answers’ are part of the scheme that aims to ‘legalize’ his return to Ukraine no matter how contrasting it is to his last four years.

The reemergence of judge Chaus is as perplexing as his  April disappearance. At this point, we have his video where he denies that he was kidnapped from Moldova and promises soon return to Ukraine. This narrative has been,  notably, picked up by Serhiy Leshchenko and other media personalities with close ties to Zelensky office.

The notorious judge is known for his disappearance acts. In 2016, he pulled this trick to avoid NABU investigation to later show up in Moldova where he was residing shunning Ukrainian media interest. Moldova was about to hand him over to Kyiv after his political asylum appeal was rejected.

His case was reportedly discussed by Volodymyr Zelensky and Maia Sandu when the latter visited Kyiv in January, 2021.  The following agreements were supposed to provide some legal grounds for the judge return. Zelensky officials may expect that notoriety of Mykola Chaus case could provide information to discredit Petro Poroshenko. After all, not every singly judge can boast such huge savings stashed in jar bars.

Mykola Chaus was kidnapped at the time when Moldova’s president was pushing for snap parliamentary elections. Moldova is a parliamentary republic where presidents stand no chance to advance their agenda unless they secure solid backing from MPs.

Moldova’s parliament swiftly responded to Chaus accident by establishing a temporary investigation putting Vasyl Nastase at its head. His brother Andrei Nastase is known as a fierce political rival of Maia Sandu.

The story with Chaus kidnapping will be, undoubtedly, used against Moldova’s president and her allies.

By coincidence, Mykola Chaus channel surfaced on Telegram on the very same day when Kyiv was hosting a visit of Moldova interim prime minister Aureliu Ciocoi. This politician can be hardly regarded as Maia Sandu envoy, given his earlier affiliation with former Moldova’s president Igor Dodon. His May visit to Kyiv allows for some final judgment on Chaus story.

It appears that the actors who started this catch-and-drop game with Chaus have a rather vague understanding of Moldova’s geography and mentality of its people. Chaus could have been moved out of Moldova to either Ukraine or Romania since the country shares the border only with these two countries.

What can be more critical is that the latest developments in Chaus story may well turn out to be a design in Russia’ intelligence agencies’ interest, endorsed from some of Zelensky officials, which aims to cause a rift between Ukrainian and Moldovan leaders and farther hamper euroatlantic aspirations of the neighboring countries.