Nord Stream 2 and guarantees for Ukraine

The United States and Germany began disclosing details of agreements between US President Joseph Biden and German Chancellor Angela Merkel during her visit to Washington. 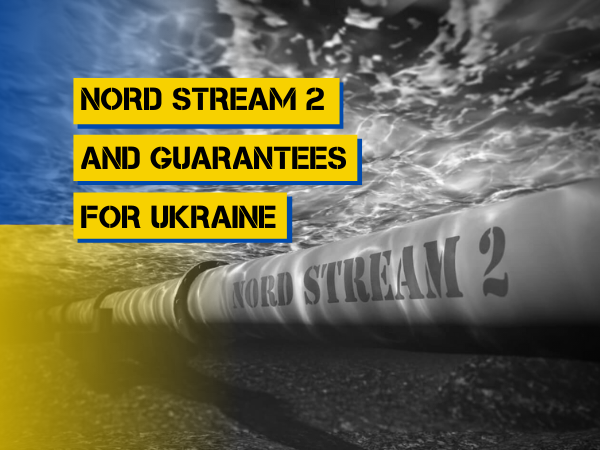 Under Secretary of State for Political Affairs Victoria Nuland told the Senate that Germany had pledged to take action if the Kremlin tried to use energy as a weapon against Ukraine. Primarily, it is about restricting the export of Russian energy to Europe.

At the same time, the United States and Germany are going to insist on extending the agreement on the transit of Russian gas through Ukraine for another 10 years after the expiration of the current contract in 2024. How Washington and Berlin are going to achieve this is still unclear. In any case, the process has already started: Angela Merkel called Vladimir Putin, and Washington has finally announced the date of arrival of Ukrainian President Volodymyr Zelensky in the US capital.

It is clear that on the eve of this visit, Zelensky will not directly criticize American decisions, regardless of whether this was really demanded of the Ukrainian authorities in Washington, or not. All this indicates to a very important thing – North Stream 2 will be completed in the near future.

Moreover, the most important question is whether Ukraine will lose its transit status. In simple words, will Gazprom be able to do without the Ukrainian pipeline after the completion of Nord Stream 2?

Just on the day of Merkel’s arrival in the United States, Germany finally lost a lawsuit against Poland over the filling of the OPAL gas pipeline, one of the branches of Nord Stream 1.

Back in 2009, the German national regulator demanded that the Russian gas monopoly resell half of the transit volumes, but Gazprom refused, and half of the pipeline’s capacity was frozen.

Gazprom gained access to another 30% of the pipeline in 2016, when the European Commission allowed it to participate in supply auctions. However, Poland immediately appealed the decision. In 2019, the EU court sided with Warsaw, and Gazprom again lost access to 50% of the pipeline’s capacity.

Since then, Gazprom has been able to maintain the full load of Nord Stream (more than 59 billion cubic meters of gas were supplied through it in 2020) only by redirecting volumes to Eugal, the onshore outlet of Nord Stream 2.

However, when Nord Stream 2 is launched, OPAL will lack capacity. Moreover, the situation with the incomplete loading of Nord Stream 1 may become an important precedent for Nord Stream 2. Therefore, the most important thing for Gazprom now is not even to complete Nord Stream 2. It is important for Gazprom to get 100%, not 50%, access to the new pipeline. In addition, this should be done by October – the period when the coalition government of the CDU/CSU and Social Democrats, led by Angela Merkel, will be in power in Germany.

There is a strong possibility that after the parliamentary election in Germany a new German government will not support Gazprom’s access to the pipeline.

Gazprom made the first attempt to gain full access when Nord Stream 2 appealed to the court to obtain an exemption from the EU Energy Charter. The decision of the court in Dusseldorf is expected on August 25, the day after the celebration of the 30th anniversary of Ukraine’s independence. Observers believe that the chances of Gazprom winning this lawsuit are very slim.

Therefore, while waiting for a court decision, Gazprom is trying to get accreditation in Germany as an independent operator. This is a form permitted by EU law and common in Germany. Under this model, Gazprom will be able to remain the owner of Nord Stream 2, but with restrictions. However, this requires certification in Germany and agreement with the European Commission. There are no guarantees of success here either.

Thus, today Gazprom can use only half of the capacity of OPAL branch. If it can use only half of Nord Stream 2 capacity, Gazprom will not be able to refuse transit through the Ukrainian pipeline. In addition, the most important, I would even say, fundamental issue is the certification of Nord Stream 2. Berlin may want to agree to the Nord Stream 2 certification, but in exchange for Russia’s extension of the transit agreement with Ukraine.

Nevertheless, to what extent can Ukraine trust such guarantees? Let us try to imagine. The parties reach an agreement. Nord Stream 2 is able to operate at full capacity. At the same time, Ukraine and Russia reach a new transit agreement with the mediation of Germany and the United States. The parties agree on the issue of compensation to Ukraine for lost transit volumes.

In the place of Ukrainian leaders, I would not rush to celebrate in this case. In a few months after this agreement Russia can, for example, announce an accident on the gas pipeline and the need to repair it. Alternatively, the accident may happen, as the former Minister of Internal Affairs of Ukraine Arsen Avakov warned, on the Ukrainian part of the gas pipeline because of the planned sabotage.

If such a failure occurs in winter, when European countries are in critical need of Russian gas, Gazprom will increase supplies on alternative routes until the repair of the ‘broken’ pipeline. Gazprom successfully used this tactic in its relations with Turkmenistan. They forced Ashgabat to abandon demands to raise prices for Turkmen gas transported through Russian pipelines. The Russian leadership can play the same game with the European Union.

That is why the issue of Nord Stream 2 completion is a matter not only of money, but also of Ukraine’s security. We still need to understand why the opponents of Nord Stream 2, including many influential American and German politicians, were not heard either in Berlin or in Washington.