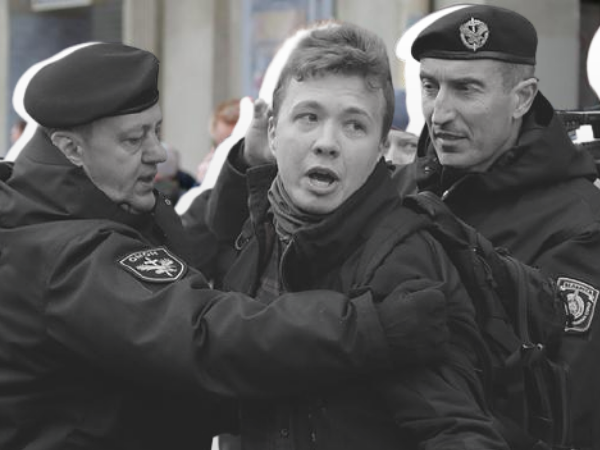 Minsk fake a suspected bomb alert and flew a Mig 29 jet fighter – that came on Oleksandr Lukashenko order- to force the landing of a Ryanair plane. The pilots were demanded to divert from their flight to Vilnus.  The Ryanair flight landed in Vilnus, its original destination, 7 hours later with Belarus opposition activist Roman Pratasevich and his girlfriend among six of its passengers now missing.

It can be assumed that kidnapping of Pratasevich was staged by Russian and Belarusian intelligence services with approval from the Kremlin.

In April, Belarus KGB announced that it exposed a ‘conspiracy’ designed by the US citizen Yuriy Zenkovych,  literary scholar Oleksand Feduta and ‘Belarus National Front’ leader Grygor Kostusev, which also pointed to close ‘cooperation’ of Belarus and Russian intelligence agencies. Back then, they allegedly tried to stage an armed coup bringing to Minsk 150 jeeps equipped with machine guns.    Now, with Pratasevich in jail, Lukashenko propaganda machine can produce the alike story.

Minsk didn’t stop short of hijacking a plane to arrest a 26 year old Roman Pratasevich blaming him and journalist  Stepan Putilo as cofounders of NEXTA Telegram channel that allegedly masterminded  opposition protests in Belarus protests. The impact of Nexta was really exceptional and its phenomenon requires serious study.

In late September of 2020, Pratasevych announced he was stepping down from this managerial work at Nexta, but it didn’t stop Lukashenko from bringing up extremism charges against both Nexta founders and placing them on a terrorist list.  It is also worth noting that in March 2021 the Nexta team produced an investigation ‘Zolotoye dno’ that traced Lukashenko family assets, which garnered millions of views on Youtube.

With death penalty still in place, Belarus may resort to it in the exceptional situations like this.

The terror act on Minsk subway that took lives of 15 people 10 years ago saw  Dmytro Konovalyuk and Vladyslav Kovalov convicted of the crime and executed the same year with all the evidence in their case destroyed.

Interestingly, Minsk regime spared the Belarus opposition leader Svitlana Tykhanovskaya who was flying the same route a week ago – Lukashenko probably revenges on his political rivals depending how formidable they appear to him.  A few days earlier, Minsk moved to pull down a popular media platform  tut.by.

In case with Roman Pratasevich, Belarus authorities will seek his confessions about Western countries’ involvement in Belarus opposition protests. I would not be surprised if the young produced them given the death penalty he is facing.

The act was met with swift condemnation from the EU top officials, the US Secretary of State, and ministers of European countries. The brazen kidnapping will surely be addressed at the Summit of European Council that is set to consider the European strategies toward Russia.

The summit agenda will see some updates with the EU leaders probably rolling out the ready sanctions package and expelling Belarus from Eastern Parnterhsip program.  We should have no illusions though it that it can rein in Lukashenko with Russia throwing strong support behind his acts and willing to step up with it  political and economic support.

The last month saw a number of trials in Belarus with political activists prosecuted for involvement with their last year protests.  New protests are unlikely development given that Belarus and Russia intelligence by now have got leverage to counter protest coordination on Telegram. With Belarus key opposition figures either jailed or driven in exile, Lukashenko is busy negotiating with Russia on new concessions.

This week, Lukashenko is set to meet with his Russian counterpart, and kidnapping of Roman Pratasevich will be surely addressed in talks between these two authoritarian leaders.

The state’ terror act’ in Belarus got mixed reaction in Kyiv given the striking similarity to the last year incident in Minsk airport when Ukrainian intelligence agencies  failed to capture Russian mercenaries involved in war crimes in Donbas.  The botched operation provoked political crisis in Ukraine, with the Verkhovna Rada still showing lack of resolve to launch its own investigation into it.

It is still an open question if Ukraine will  join their sanctioning policies of the EU and the US against Belarus – official Kyiv has been rather restrained in its response. There are some reasonable doubt about it in light of the latest ‘Radio Liberty’ story about Ukrainian transport aircraft AN-125 delivering Russia’s jet fighters from Serbia to Belarus.

In his blatant disregard to values of democracy, Oleksandr Lukashenko is generating a  new crisis  that  challenges Western countries. Coordinated response of international community should help to deter him from such acts, but it requires strong political will of all actors combined with asymmetric response.